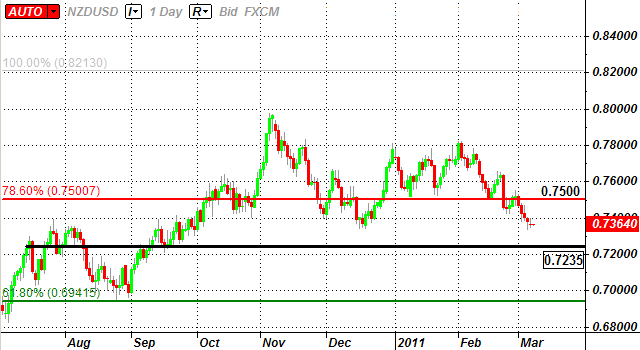 The Reserve Bank of New Zealand is widely expected to lower the benchmark interest rate by 25bp to 2.75% in March, and speculation for another round of monetary easing could spark a sharp selloff in the exchange rate as investors weigh the prospects for future policy. According to Credit Suisse overnight index swaps, investors a pricing a 100 percent chance for a rate cut this month, and the central bank may look to support the real economy throughout 2011 in an effort to stem the risk for a double-dip recession. As the region copes with the aftermath of the natural disasters, the RBNZ may continue to curb their outlook for growth and inflation, and dovish comments from the central bank is likely to exacerbate the downturn in the exchange rate as interest rate expectations falter.

As the isle-nation continues to benefit from the expansion in global trade, with businesses increasing their rate of production, the recent developments may encourage the RBNZ to keep the benchmark interest rate at 3.00% in March as rising commodity prices heightens the risk for inflation. However, as employment contracts for the second time in 2010, with households scaling back on consumption, the central bank may revert back to a loosened policy stance in order to promote a sustainable recovery. In turn, the NZD/USD may continue to retrace the advance from the previous year, and the exchange rate may work its way back below 0.7000 over the near-term if the central bank sees scope to expand monetary policy further over the coming months.

Trading the rate decision certainly reinforces a bearish outlook for the New Zealand dollar as investors expect the RBNZ to cut the interest rate in March, but the central bank may surprised the market and retain its wait-and-see approach as the region continues to benefit from the rise in global trade. As a result, if the RBNZ keeps the cash rate a 3.00%, we will need a green, five-minute candle subsequent to the announcement in order to establish a buy entry on two-lots of NZD/USD. Once these conditions are met, we will set the initial stop at the nearby swing low or a reasonable distance after taking market volatility into account, and this risk will generate our first target. The second objective will be based on discretion, and we will move the stop on the second lot to cost once the first trade reaches its mark in order to preserve our profits.

In contrast, the central bank may adopt a dovish outlook for future policy in order to combat the risk for a double-dip recession, and speculation for another round of monetary easing is likely to bear down on the high-yielding currency as interest rate expectations falter. Therefore, if the RBNZ lowers borrowing costs by 25bp or more in March, we will implement the same strategy for a short kiwi-dollar trade as the long position laid out above, just in reverse.