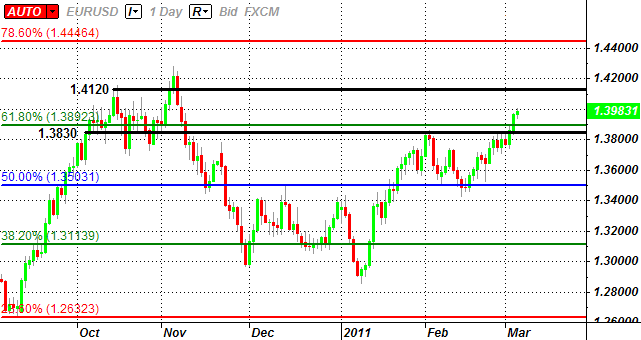 The Sentix investor confidence survey is anticipated to increase to 17.2 in March from 16.7 in the previous month, which would be the highest reading since September 2007, and the rise in sentiment could spark a rally in the euro as growth prospects improve. In turn, the European Central Bank may lift the benchmark interest off the record-low at its next rate decision on April 7, and the near-term rally in the EUR/USD may gather pace going forward as market participants expect the Governing Council to reestablish its exit strategy over the coming months. However, as the region faces an uneven recovery, with the tough austerity measures bearing down on economic activity, the central bank may retain its wait-and-see approach throughout the first-half of the year as it aims to balance the risks for the euro-area.

As private sector spending accelerates, with household confidence improving, investor sentiment may continue to gather pace in 2011 as European policy makers raise their outlook for growth and inflation. However, as the expansion in global trade cools, with businesses scaling back on investments, confidence in the Euro-Zone may deteriorate over the coming months as the governments operating under the fixed-exchange rate system take unprecedented steps to balance the budget deficit. In turn, the ECB may see scope to support the real economy over the coming months, and a downturn in interest rate expectations is likely to weigh on the exchange rate as investors weigh the prospects for future policy.

Expectations for a third consecutive rise in investor sentiment certainly encourages a bullish outlook for the single-currency, and the market reaction following the release could set the stage for a long euro trade as investors speculate the ECB to normalize monetary policy over the coming months. Therefore, if the Sentix survey advances to 17.2 or higher in March, we will need to see a green, five-minute candle subsequent to the data to establish a buy entry on two-lots of EUR/USD. Once these conditions are met, we will set the initial stop at the nearby swing low or a reasonable distance from the entry, and this risk will generate our first objective. The second target will be based on discretion, and we will move the stop on the second lot to breakeven once the first trade reaches its mark in an effort to lock-in our profits.

On the other hand, investor sentiment may falter in March as European policy makers struggle to address the sovereign debt crisis, and the uncertainties surrounding the economic outlook may bear down on confidence as the risk for contagion intensifies. As a result, if the survey unexpectedly weakens from the previous month, we will carry out the same setup for a short euro-dollar trade as the long position laid out above, just in the opposite direction.