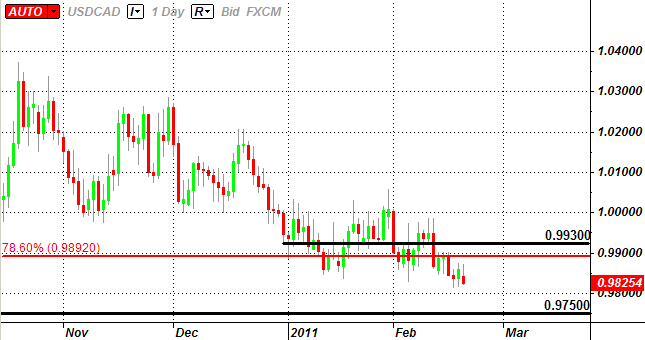 Retail spending in Canada is forecasted to hold flat in December after expanding 1.3% in the previous month, while sales excluding autos are projected to increase 0.6% after climbing 1.0% during the same period. As economic activity in Canada outpaces the recovery in the world’s largest economy, a rise in household consumption is likely to spark a bullish in the local currency, and the USD/CAD may extend the decline from earlier this month as market participants speculate the Bank of Canada to tighten monetary policy further this year. However, as the marked appreciation in the exchange rate dampens the outlook for future growth, the BoC may look to support the real economy throughout the first-half of the year, and the central bank may curb speculation for higher interest rates as the fundamental outlook remains clouded with high uncertainty.

As businesses keep a lid on consumer prices, with employment increasing for the fourth consecutive month in January, households may increase their rate of consumption as the economic recovery gathers pace. However, as manufacturing and wholesale demands miss market expectations, with firms scaling back on spending, retail sales could fall short of forecasts given the ongoing weakness within the private sector. In turn, the BoC may retain its wait-and-see approach throughout the first half of 2011, and the central bank may keep the benchmark interest rate on hold over the coming months as it aims to encourage a sustainable recovery.

Trading the given event risk is certainly not as clear cut as some of our previous trades as market participants expect household spending to hold flat in December, but an unexpected expansion in private consumption could set the stage for a long Canadian dollar trade as the outlook for future growth improves. Therefore, if retail sales increases 0.2% or greater during the month, we will need to see a red, five-minute candle following the release to generate a sell entry on two-lots of USD/CAD. Once these conditions are met, we will set the initial stop at the nearby swing high or a reasonable distance from the entry, and this risk will establish our first target. The second objective will be based on discretion, and we will move the stop on the second lot to cost once the first trade reaches its mark in an effort to lock-in our profits.

On the other hand, consumers may scale back on spending as they cope with higher energy prices paired with the ongoing weakness within the private sector, and a drop in household consumption could bear down on the exchange rate as growth prospects deteriorate. As a result, if sales weakens 0.2% or greater from the previous month, we will implement the same strategy for a long dollar-loonie trade as the short position laid out above, just in reverse.

To Give Feedback on the New Layout, Please Send Your Comments or Recommendations to David Song, Currency Analyst: dsong@dailyfx.com