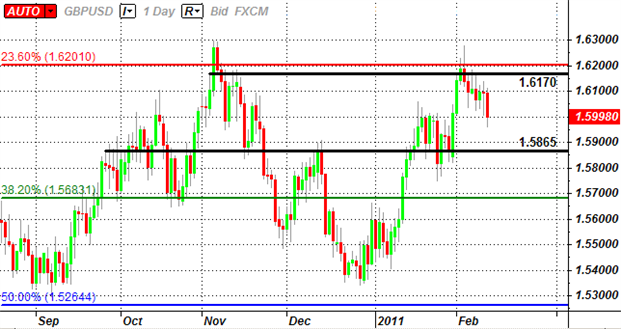 As price pressures in the U.K. intensify, the recent decline in the British Pound is likely to be short-lived, and market participants may increase speculation for a rate hike later this year as inflation expands at the fastest face since November 2008. However, as the new coalition in Britain takes extraordinary steps to curb the budget deficit, the tough austerity measures could bear down on the recovery, and the central bank may retain a wait-and-see approach throughout the first-half of 2011 as the economic outlook remains clouded with high uncertainty.

Consumer prices in the U.K. are forecasted to increase at an annualized pace of 4.0% in January after expanding 3.7% in the previous month, while the core rate of inflation is projected to hit a record high of 3.1% during the same period. As price growth accelerates, the Bank of England may show a greater willingness to withdraw monetary support this year, and the central bank may hold a highly hawkish outlook in its quarter inflation report due out on February 16 as the economic recovery gradually gathers pace.

As consumer inflation expectations advance to the highest level since 2008, with producer prices growing at the fastest pace since May, firms may see scope to pass on higher costs onto consumers as private sector activity improves. A marked rise in inflation is spark a bullish reaction in the British Pound as the central bank maintains a hawkish outlook for future policy, and the GBP/USD may retrace the decline from earlier this month as investors raise bets for a rate hike later this year.

However, as Britons cope with the tepid recovery in the labor market paired with the ongoing weakness in the housing market, the substantial margin of slack within real economy may bear down on price growth, and the firms may look to absorb higher costs in an effort to drive demands. In turn, a weaker-than-expected inflation report could exacerbate the recent decline in the exchange rate, and the GBP/USD may retrace the advance from the previous month as it searches for support.

Expectations for a higher rate of inflation certainly favors a bullish outlook for the sterling, and price action following the report could set the stage for a long British Pound trade as investors expect the BoE to hike borrowing costs later this year. Therefore, if consumer prices expand 4.0% or greater from the previous year, we will need a green, five-minute candle following the release to establish a buy entry on two-lots of GBP/USD. Once these conditions are met, we will set the initial stop at the nearby swing low or a reasonable distance after taking market volatility into account, and this risk will establish our first target. The second objective will be based on discretion, and we will move the stop on the second lot to cost once the first trade reaches its mark in order to preserve our profits.

In contrast, the ongoing weakness within the private sector paired with the tough austerity measures could bear down on price growth, and a slower-than-expected pace of price growth could weigh on the exchange rate as interest rate expectations falter. As a result, if consumer prices unexpectedly hold steady or expands less than 4.0% from the previous year, we will look to implement the same strategy for a short pound-dollar trade as the long position laid out above, just in reverse.