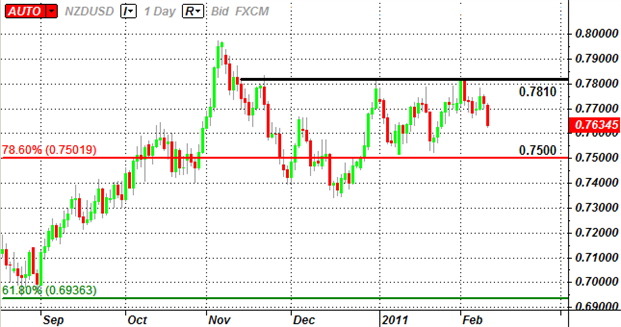 As market participants expect household spending in New Zealand to contract in December , the NZD/USD may continue to retrace the advance from the end of January as the outlook for growth and inflation deteriorates. New Zealand Finance Minister Bill English said economic activity may have contracted during the last three-months of 2010 as households increase their rate of savings and look to lower their holdings of debt, and the ongoing slack within the private sector could lead the central bank to keep the interest rate on hold throughout the first-half of the year as it aims to encourage a sustainable recovery.

Retail spending in New Zealand is forecasted to contract 0.4% in December, while sales excluding autos are projected to weaken another 0.3% during the same period, and growth prospects may deteriorates further over the coming months as households curb their temperament to spend. As the region faces a risk for a double-dip recession, we expect the Reserve Bank of New Zealand keep the official cash rate at 3.00% in the months ahead, and the kiwi may face additional headwinds over the near-term as interest rate expectations falter.

Private wages in New Zealand expanded 0.6% for the second time in the fourth-quarter, with credit card spending advancing 2.4% in January, and households may increase their rate of consumption as private sector activity improves. In turn, an unexpected rise in sales could lead the NZD/USD to recoup the decline from earlier this month, and the exchange rate may make another run at 0.7800 as the economic recovery gathers pace.

However, as employment unexpectedly contracts 0.5% during the last three-months of 2010, with households facing higher borrowing costs, consumers may continue to rein in on spending as policy makers see a risk for a double-dip recession. A dismal sales report is likely to exacerbate the recent weakness in the New Zealand dollar, which could lead the NZD/USD to retrace the advance from the end of January as investors curb speculation for a rate hike in the first-quarter of 2011.

Projections for a drop in retail spending certainly reinforces a bearish outlook for the New Zealand dollar, but an unexpected rise in private consumption could set the stage for a long kiwi trade as the prospects for future growth improves. As a result, if sales expands 0.2% or greater from the previous month, we will need to see a green, five-minute candle following the release to establish a buy entry on two-lots of NZD/USD. Once these conditions are fulfilled, we will set the initial stop at the nearby swing low or a reasonable distance from the entry, and this risk will generate our first target. The second objective will be based on discretion, and we will move the stop on the second lot to cost once the first trade reaches its mark in an effort to lock-in our profits.

In contrast, households may scale back on consumption as they face higher borrowing costs paired with the protracted recovery in the labor market, and a dismal sales report could spark a sharp selloff in the exchange rate as interest rate expectations falter. Therefore, if private spending weakens 0.4% or greater in December, we will implement the same setup for a short kiwi-dollar trade as the long position laid out above, just in the opposite direction.