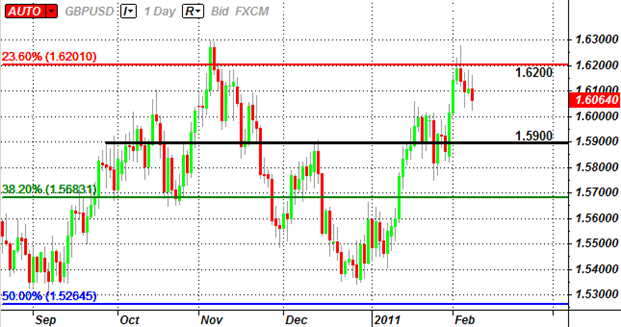 The Bank of England is widely expected to retain its current policy in February, but currency traders may show another bullish reaction to the rate decision as they speculate the central bank to gradually normalize monetary policy this year. We expect board member Andrew Sentance and Martin Weale to push for another 25bp rate this month given the stickiness in price growth, while Adam Posen is likely to vote for a GBP 50B expansion in quantitative easing as the tough austerity measures bear down on the economic recovery.

A Bloomberg News survey shows all of the 38 economists polled forecast the BoE to hold the benchmark interest rate at 0.50% while maintaining the asset purchase target at GBP 200B. At the same time, investors are pricing a 17% chance for a 25bp rate hike according to Credit Suisse overnight index swaps, and interest rate expectations are likely to gather pace over the coming months as the central bank holds a hawkish outlook for future policy. As the BoE maintains its wait-and-see approach, we are likely to see the MPC refrain from releasing a policy statement, but expectations for a rate hike later this year is likely to prop up the sterling as investors weigh the prospects for future policy.

The headline reading for U.K. inflation surged to an annualized 3.7% in December, with the core rate unexpectedly advancing to 2.9%, and the stickiness in price growth could lead the BoE to adopt a highly hawkish outlook for future policy as the central bank expects consumer prices to hold above the 2% throughout 2011. In turn, speculation surrounding the prospects for monetary policy could lead the GBP/USD to retrace the sharp decline from earlier this month, and the exchange rate may make another run at 1.6300 as it maintains the upward trend from back in January.

However, as economic activity unexpectedly contracts in the fourth quarter, with consumer confidence weakening the most since 1994, the recent developments could lead the BoE to talk down speculation for a rate hike this year as the fundamental outlook remains clouded with high uncertainty. Accordingly, additional members of the MPC may see scope to ease monetary policy further over the coming months, and speculation for another expansion in QE could lead the GBP/USD retrace the advance from earlier this month as interest rate expectations falter.

Trading the given event risk is certainly not as clear cut as some of our previous trades as we expect the BoE to refrain from releasing a policy statement, but price action following the announcement could set the stage for a long British Pound trade as investors expect the central bank to gradually normalize monetary policy in 2011. Therefore, if the central bank maintains its current policy in February, we will need a green, five-minute candle following the rate decision to establish a buy entry on two-lots of GBP/USD. Once these conditions are met, we will set the initial stop at the nearby swing low or a reasonable distance after taking market volatility into account, and this risk will generate our first target. The second objective will be based on discretion, and we will move the stop on the second lot to cost once the first trade reaches its mark in order to protect our profits.

In contrast, the BoE may strike a dovish tone for future policy given the ongoing weakness within the private sector, and the central bank may leave the door open to conduct additional monetary easing as the austerity measures bear down on the economic recovery. As a result, if the central bank surprises the market and expands QE by another GBP 50B, we will utilize the same strategy for a short pound-dollar trade as the long position laid out above, just in reverse.