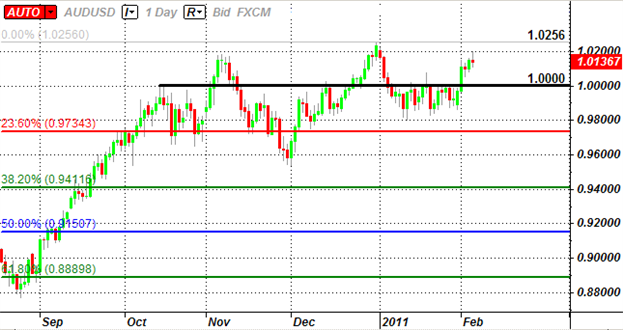 As market participants expect retail sales in Australia to increase for the second consecutive month in December, the rise in private consumption could lead the near-term rally in the AUD/USD to gather pace as growth prospects improve. However, as the region copes with the worst flood in 50 years, with households increasing their rate of consumption, a dismal sales report could spark a reversal in the aussie-dollar as the fundamental outlook bears down on interest rate expectations.

Household spending is forecasted to increase another 0.5% in December after climbing 0.3% in the previous month, while sales excluding inflation is projected to rise 0.1% in the fourth quarter. As the Reserve Bank of Australia raises its growth forecast for 2011, a marked rise in private sector consumption could spark a bullish reaction in the exchange rate, and the central bank may see scope to tighten monetary policy further this year as it aims to balance the risks for growth and inflation.

As the Australian labor market improves throughout the second-half of 2010, with private sector credit expanding throughout the fourth quarter, households may increase their rate of consumption as the economic recovery gathers pace, In turn, a positive sales report could lead the AUD/USD to retrace the decline from Friday, and the exchange rate may make another run at 1.0200 as the central bank anticipates the economy to grow at a faster pace an initially expected.

However, as consumer confidence wanes, with households facing higher borrowing costs, the rise in the national savings rate could bear down on retail spending as individuals remain reluctant to increase consumption. Accordingly, a dismal sales report could lead the AUD/USD to retrace the advance from the beginning of the month, and the pair may work its way back below parity as the outlook for growth and inflation weakens.

Expectations for a rise in retail spending certainly favors a bullish outlook for the Australian dollar, and price action following the report could set the stage for a long Australian dollar trade as growth prospects improve. Therefore, if sales expands 0.5% or greater in December, we will need to see a green, five-minute candle subsequent to the release to confirm a buy entry on two-lots of AUD/USD. Once these conditions are met, we will set the initial stop the nearby swing low or a reasonable distance from the entry, and this risk will establish our first objective. The second target will be based on discretion, and we will move the stop on the second lot to cost once the first trade reaches its mark in order to preserve our profits.

On the other hand, the aftermath of the flood is likely to bear down on economic activity, and households may continue to ramp up their rate of savings over the coming months as they face higher borrowing costs. As a result, if sales expands less than 0.3% or unexpectedly contracts from the previous month, we will implement the same setup for a short aussie-dollar trade as the long position laid out above, just in reverse.

Potential Price Targets For The Event