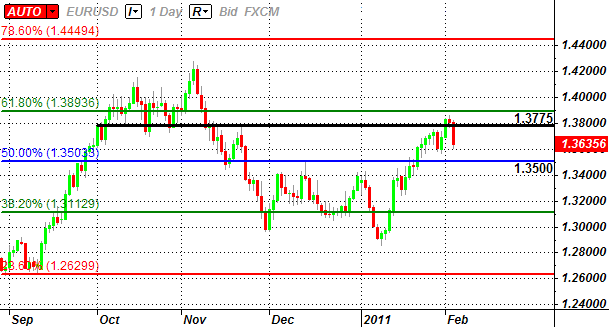 As market participants expect the U.S. labor market to improve for the fourth consecutive month in January, the dollar may continue to recoup the losses from earlier this week, and the rebound in the greenback may gather pace going forward as the recovery in the world’s largest economy gathers pace. In turn, the Federal Reserve may revise its economic assessment at its next rate decision in March, and the central bank may curb speculation for additional monetary stimulus as the prospects for growth and inflation pick up.

U.S. non-farm payrolls are forecasted to increase 145K in January following the 103K expansion in the previous month, while the unemployment rate is projected to widen to 9.5% from 9.4% during the same period as discouraged workers return to the labor force. However, as the Fed Chairman Ben Bernanke expects it to take another “four to five more years for the job market to normalize fully,” we may see NFP’s disappoint once again given the ongoing slack within the real economy, and the tepid pace of growth in the labor market could bear down on the exchange rate as the central bank continues to cast doubts for a sustainable recovery.

The ADP labor report showed private payrolls increased 187K in January, which topped forecasts for a 140K rise, while employment in manufacturing expanded at a faster pace during the same period, with the ISM’s gauge advancing to 61.7 from 58.9 in December. As private sector activity improves, we may see a larger-than-expected expansion in employment, and the rise in payrolls could push the EUR/USD back down towards the 50.0% Fibonacci retracement from the 2009 high to the 2010 low around 1.3500 as the pair retraces the advance carried over from January.

However, as businesses cope with rising energy prices paired with tightening credit conditions, U.S. firms may curb their willingness to expand the labor force, and the Fed may see scope to expand monetary policy further this year as it aims to encourage a sustainable recovery. Accordingly, a dismal NFP report could spark a selloff in the dollar, and the EUR/USD may pare the sharp decline on Thursday as the outlook for growth and inflation deteriorates.

Expectations for a fourth consecutive rise in employment certainly favors a bullish outlook for the greenback, and market reaction following the report could set the stage for a long U.S. dollar trade as the recovery gathers pace. Therefore, if payrolls increase 145K or greater in January, we will need a red, five-minute candle following the release to generate a sell entry on two-lots of EUR/USD. Once these conditions are met, we will set the initial stop at the nearby swing high or a reasonable distance from the entry after taking market volatility into account, and this risk will establish our first target. The second objective will be based on discretion, and we will move the stop on the second lot to breakeven once the first trade reaches its mark in an effort to protect our profits.

In contrast, businesses may keep a lid on employment as the central bank retains a cautious outlook for the economy, and the subdued recovery in the labor market may lead the Fed to expand monetary policy further over the coming months as it aims to stem the downside risks for growth and inflation. As a result, if NFP’s expand less than 100K from the previous month, we will implement the same strategy for a long euro-dollar trade as the short position laid out above, just in reverse.

Impact that U.S. Non-Farm Payrolls has had on USD during the last month