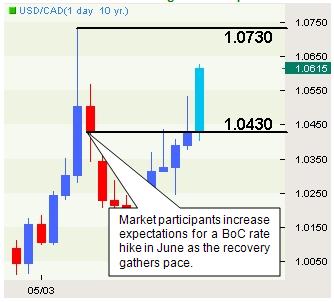 
As household consumption in Canada is expected to increase for the fourth consecutive month in March, the data is likely to encourage an improved outlook for future growth and may lead the central bank to normalize policy further in the second-half of the year. At the same time, consumer prices are forecasted to increase at an annualized pace of 1.7% in April, which would be the fastest pace of growth since January, and the rise in growth and inflation is likely to spark increased volatility in the exchange rate as market participants weigh the prospects for future policy. A Bloomberg News survey shows 11 of the 12 economists polled forecast the Bank of Canada to raise the benchmark interest rate to 0.50% next month from the record-low of 0.25%, while investors are pricing investors are pricing a 68% chance for a 25bp rate hike according to Credit Suisse overnight index swaps as Governor Mark Carney sees 2010 as the “turning point when private sector demand takes over from the public sector as the primary source of growth.”

With the labor market improving at a record pace, retail sales is projected to increase another 0.1% after expanding 0.5% in February, while spending excluding autos is anticipated to rise 0.4% during the same period after unexpectedly contracting 0.1% in the previous month. As the economic outlook improves, the central bank stated that “it is appropriate to begin to lessen the degree of monetary stimulus,” and expects the private sector to “be the sole contributor to  the growth of domestic demand in Canada” by 2011. However, Governor Carney talked down speculation for a rate hike while speaking to lawmakers and argued that “nothing is pre-ordained,” and went onto say that “any additional withdrawal of monetary stimulus will depend on the outlook for economic activity and inflation.”

A report by Statistics Canada showed wholesale demands jumped 1.4% to exceed expectations for a 0.6% rise, while manufacturing sales increased 1.2% amid forecasts  for a 1.0% expansion, and the data suggests that retail spending may top projections in March as the economic recovery gathers pace. As growth prospects improve, market participants are likely to increase speculation for a rate hike in June, and the rise in interest rate expectations could drive the Canadian dollar higher as the central bank shows a greater willingness to normalize monetary policy further in the second-half of 2010.

However, consumers may keep a lid on spending as they face rising inflation paired with tightening credit conditions, and households may look to maintain a higher rate of savings over the near-term as the government stimulus begins to taper off. As a result, a dismal sales report could certainly weigh on the exchange rate as market participants weigh the prospects for a sustainable recovery, and can lead the BoC to maintain a loose policy stance in June as the central bank aims to balance the risks for the economy.

Expectations for a rise in retail sales favors a bullish outlook for the Canadian dollar, and price action following the report could set the stage for a long loonie trade as the outlook for future growth improves. Therefore, if spending increases 0.1% or greater in March, we will need to see a red, five-minute candle subsequent to the release to generate a sell entry on two-lots of USD/CAD. Once these conditions are met, we will set the initial stop at the nearby swing high or a reasonable distance after taking market volatility into account, and this risk will establish our first target. The second objective will be based on discretion, and we will move the stop on the second lot to breakeven once the first trade reaches its mark in order to preserve our profits.

In contrast, households may look to lower their rate of consumption and increase their savings as the government stimulus tapers off, and a dismal sales report could drag on the exchange rate as investors weigh the outlook for future growth. As a result, if spending unexpectedly holds flat or contracts from the previous month, we will favor a bearish outlook for the Canadian dollar and will follow the same setup for a long dollar-loonie trade as the short position laid out above, just in reverse.

What To Look For Before The Release
Traders with access to market depth information via the FXCM Active Trader Platform may use it to gauge the potency of the economic data release as well as to shed some light on the market’s directional bias. Increasing volume ahead of the announcement will telegraph likely follow-through behind whatever move is to materialize, while an imbalance in available liquidity on the Bid versus the Offer side of the market will tell us the direction major institutions are likely favoring ahead of the announcement: