The April US non-farm payrolls report was the worst case scenario for the US Dollar: the result has been a mix of lower nominal bond yields and higher inflation expectations, curating an environment of falling real yields. Even though chatter about the Federal Reserve unveiling a taper timeline in the coming months was growing, the narrative around the US Dollar has dramatically changed at the start of May.

The weak US Dollar environment comes against a still appealing macro mix of stable global bond yields, otherwise generally improving global economic data, and surging commodity prices. The greenback is seen squarely as low yielding funding currency at the moment, allowing for other currencies with more appealing near-term prospects – or proxies to those with more appealing near-term prospects, perhaps tied to commodities – to gain ground.

Accordingly, as the calendar turns to the middle of May, each of USD/CHF, USD/NOK, and USD/SEK rates retain their bearish potential. Both USD/CHF and USD/SEK have traded below their intrayearly uptrends, while USD/NOK’s bear flag breakout remains on track. 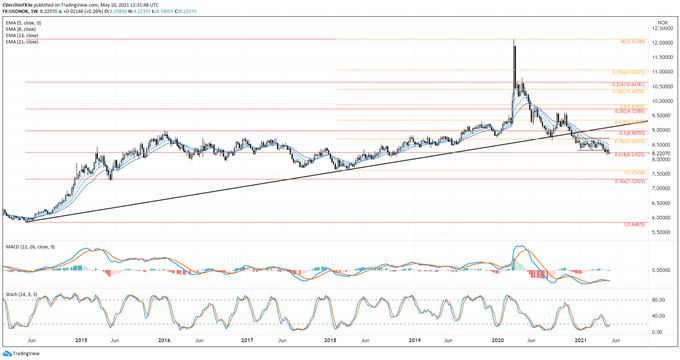 Looking at the weekly timeframe, USD/NOK rates have made a decisive break below bear flag support, and in context of the preceding move, which was a steady decline from the March 2020 high, suggests deeper losses are ahead. Incidentally, the bear flag breakout occurred a few months after USD/NOK dropped below the ascending trendline from the May 2014 and March 2018 lows (which briefly held as support in August 2020 before giving way in November 2020).

It’s been previously noted that “the biggest sign of confidence USD/NOK rates might offer that a bearish breakout is gathering pace would be if the pair achieved a weekly close 8.2453, the 61.8% Fibonacci retracement of the May 2014 low/March 2020 high range.” This has indeed occurred; more losses appear likely to gather pace through the remainder of 2Q’21. 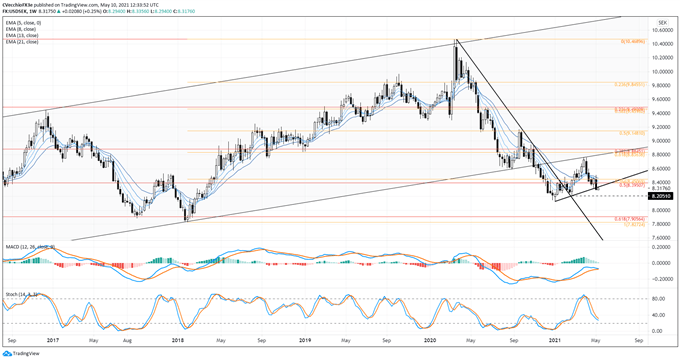 In the prior update, it was noted that “USD/SEK rates have pulled back sharply over the past two weeks, failing to return into the rising parallel channel drawn from the December 2016 and March 2020 highs again the February 2018 and August 2020 lows. In failing to retake the channel in recent weeks, USD/SEK also lost its uptrend from the February and March 2021 swing lows…USD/SEK rates may soon be heading back towards the 50% Fibonacci retracement of the March 2014 low/March 2020 high at 8.3951.”

USD/SEK rates established a bearish weekly outside engulfing bar last week, while breaking below the aforementioned 50% Fibonacci retracement and the uptrend from the January and February swing lows. In breaking below this confluence of technical support, USD/SEK rates may have offered a clear signal that a top has been established; price action at the start of the year was the re-test of the bearish breakout from the multi-year rising channel.

Momentum is increasingly bearish on the weekly timeframe. USD/SEK rates are below their weekly EMA envelope, which is nearly aligned in bearish sequential order. Weekly MACD is nearing a bearish crossover below its signal line, while weekly Slow Stochastics are declining towards oversold territory. A deeper setback may be ahead. 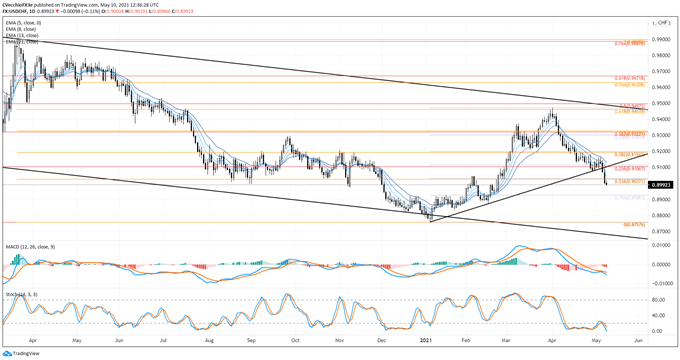 USD/CHF rates are below their daily EMA envelope, which is in bearish sequential order. Daily MACD’s drop is accelerating below its signal line, while daily Slow Stochastics are digging deeper in oversold territory. The path of least resistance is lower in the near-term. 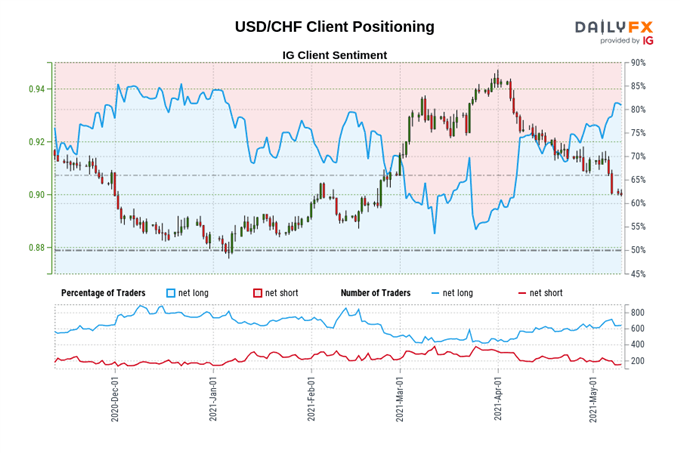 We typically take a contrarian view to crowd sentiment, and the fact traders are net-long suggests USD/CHF prices may continue to fall.

Positioning is less net-long than yesterday but more net-long from last week. The combination of current sentiment and recent changes gives us a further mixed USD/CHF trading bias.