Global bond yields are soaring and global equity markets are tanking. The US Dollar is in vogue as the world’s reserve currency, backed by higher US Treasury yields. Such conditions speak to a risk-off mood gripping global markets.

And yet, the Euro has been surprisingly weaker than one might think against the trio of major commodity currency crosses. More significant breakdowns in pairs like EUR/AUD and EUR/CAD appear to be starting (or may soon), while EUR/NZD rates have not broken their pandemic downtrend yet, suggesting bears remain in control. In a more risk-seeking environment, these pairs appear poised to continue along their trends since March 2020. 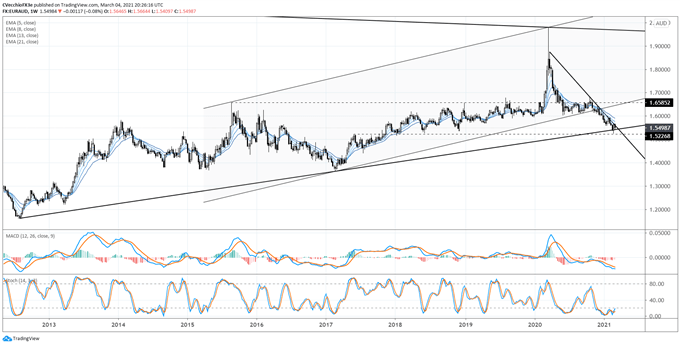 In late-2020, EUR/AUD rates broke support in the rising parallel channel measured from the 2015 and 2020 highs against the 2017 low, setting up a return to the longer-standing ascending trendline from the 2012 and 2017 lows. The pair has since bounced from the latter nine-year long trendline, warding off a more significant bearish breakdown for now.

But the pandemic downtrend remains in place, and the fact that EUR/USD itself has lost its pandemic uptrend while a pair like EUR/AUD continues to press lower suggests that a more significant sea change among the EUR-crosses is taking place. A break through the May 2017 high at 1.5227, which served as support in December 2017, January, June, and December 2018, would also mark a break of the ascending trendline from the 2012 and 2017 lows. Bears should be on alert for a more significant breakdown opportunity. 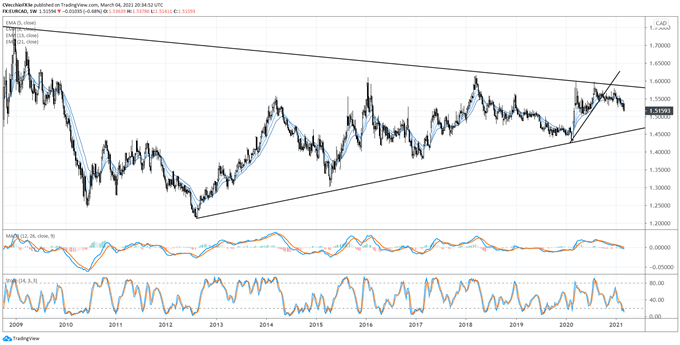 A look at the EUR/CAD weekly timeframe suggests that bears are gaining control of the narrative. Multiple rejections in 2020 at the trendline dating back to the theoretical 1994 (pre-inception), 2008, and 2020 highs warned of a potential pullback, and the mid-year 2020 break of the pandemic uptrend was another warning sign that momentum was downshifting.

With global energy markets proving extremely bullish in recent weeks, the Canadian Dollar has weathered the risk-off asset reallocation shuffle sparked by higher global bond yields (mainly, US Treasuries). Weekly MACD is now in oversold territory, while weekly MACD has dropped below its signal line just this week. More selling may be on the way soon, with EUR/CAD aiming for the rising trendline from the 2012 and 2020 lows near 1.4600. 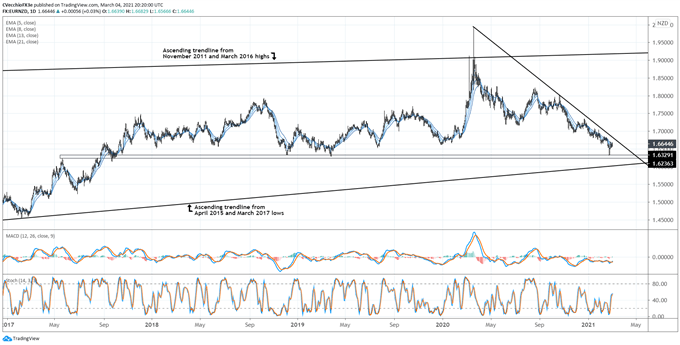 In March 2020, EUR/NZD was rejected at the ascending trendline from the November 2011 and March 2016 highs. Since that false bullish breakout attempt, as if often the case, price action has reversed within the preceding consolidation towards the other side. In this case, a false bullish breakout portends a move towards the consolidation’s support, which takes the form of the ascending trendline from the April 2015 and March 2017 lows; this trendline has not yet been reached. Concurrently, the downtrend from the March and November 2020 highs remains; the pandemic downtrend is strong.

The recent bounce in price action came at a familiar zone, the area between 1.6236 and 1.6329, which served as resistance back in June and August 2017, but has been support in September 2018, December 2018, and March 2019 previously. Even as EUR/NZD rates have jumped in recent days, the pair has only just seen daily Slow Stochastics move above their median line, while daily MACD remains below its signal line. Weak hands are being cleared out before a continuation effort lower anew.