In recent days we’ve looked at the major EUR-crosses, surmising that the Euro itself is without a major thematic influence and instead remains at the whims of the broader markets. Considering another perspective, looking at the Euro through the lens of non-major EUR-crosses, a similar story unfolds: there is no singular thread driving price action around the Euro itself. Instead, taking recent pricing action in aggregate in EUR/CHF, EUR/NOK, and EUR/SEK rates, a narrative unfolds: risk appetite is improving, plain and simple. 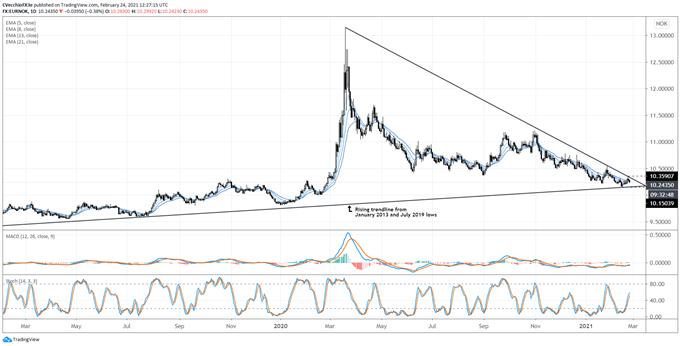 For all the talk about the impact of oil prices on the Canadian Dollar (energy is 11% of Canada GDP), the Norwegian Krone is effectively twice as sensitive (energy is 20% of Norway GDP). The rally in oil prices at the start of 2021 has left EUR/NOK vulnerable for a deeper pullback, and the consolidation occurring in EUR/NOK in recent weeks suggests that the pair is funneling into the vertex of the symmetrical triangle formed by the rising trendline from the January 2013/July 2019 lows and the March 2020/January 2020 highs.

Seeing how symmetrical triangles are neutral patterns, we’ll look to the recent sideways range as key thresholds to identifying the triangle breakout: EUR/NOK is bullish above 10.3591, bearish below 10.1504, and neutral in between. 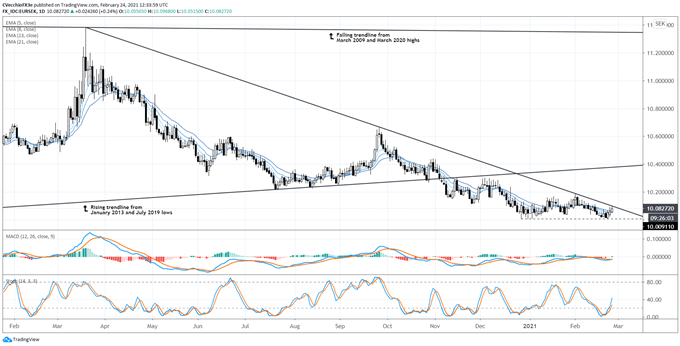 Like EUR/NOK, EUR/SEK is consolidating into the vertex of a potential triangle. However, EUR/SEK’s triangle is shorter-term in nature, and the pair has already broken down through the uptrend dating back to the January 2013 low (while EUR/NOK has not). While the pair has rebounded from yearly lows in recent days, unless the downtrend from the March and September 2020 swing highs breaks, then the pair retains a downside bias for continuation below the mutli-year uptrend from the January 2013 and July 2019 lows. 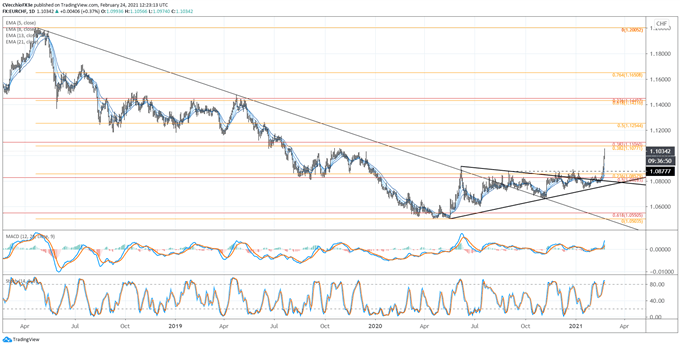 We haven’t looked at EUR/CHF rates since early-December, but we have seen follow-through on the pattern that we were monitoring. “The area between 1.0857 and 1.0878 has produced several tops in recent months, dating back to early-June. Gains through 1.0878 in the coming weeks would offer a strong sense of confidence that not only is the symmetrical triangle bullish breakout gaining pace, but that a longer-term bottoming effort has been commenced.”

Just this week, EUR/CHF broke through 1.0878, en route to its highest level since July 2020. In context of the break of the downtrend from the April 2018 and May 2019 highs, it appears that we have another piece of evidence suggesting a bottoming effort is taking place. EUR/CHF rates may soon find resistance in the 1.1077/1.1106 area, a cluster of Fibonacci retracements dating back to the post-EUR/CHF floor highs. 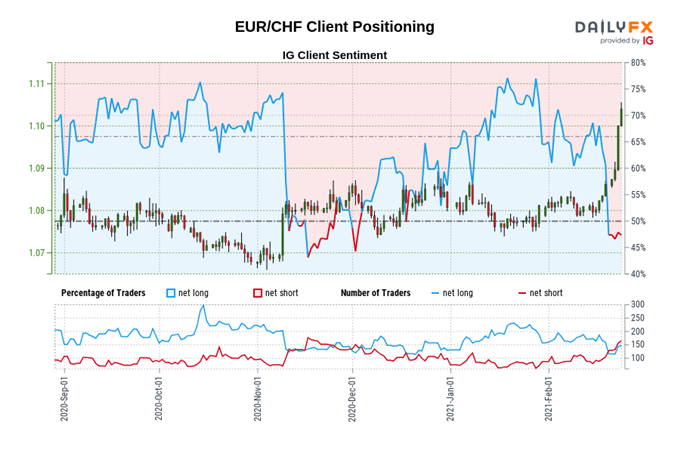 We typically take a contrarian view to crowd sentiment, and the fact traders are net-short suggests EUR/CHF prices may continue to rise.

Traders are further net-short than yesterday and last week, and the combination of current sentiment and recent changes gives us a stronger EUR/CHF-bullish contrarian trading bias.