Equities: European bourses posting modest gains ahead of Biden’s stimulus announcement. Reports overnight stated that the stimulus plan could be around the region of $2trillion, which is some $700bln more than what had been touted by Senate Democrat Leader Schumer.

FX: The Euro is slightly underperforming as Italian political risks begin to rise after former PM Renzi pulled his party out of the ruling coalition. However, BTP-Bund 10yr spreads are marginally wider, the spillover into FX has been limited thus far. That said, focus will be on a cabinet reshuffle. Elsewhere, FX markets have largely remained directionless with GBP/USD struggling to hold above 1.37, while USD/JPY remains anchored at 104.00.

Fed Chair Powell is scheduled to speak from 17:30GMT, however, given the plethora of Fed speakers already pushing back against taper talks that had been sparked by Bostic. Powell will likely stick to the current mantra in that QE purchases will remain unchanged for quite some time. 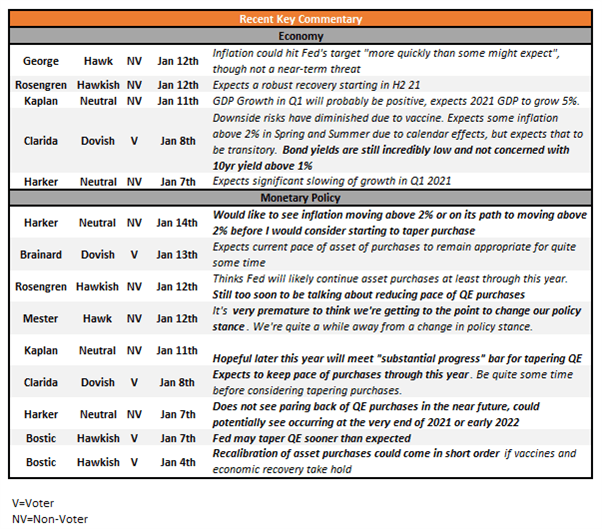 What to Expect from Biden’s Stimulus Package?

President-Elect Biden is expected to announce a major COVD-19 relief package from 00:00GMT with people familiar with the matter suggesting that the package is around $2trillion. The relief measures are expected to include large direct payments ($2000 stimulus checks), sizeable state and local funding, as well as vaccine distribution and emergency spending provisions, according to CNN.

With Democrats controlling the Senate, Biden and Harris will first offer negotiations in an attempt to reach bipartisan support for fiscal policies. However, with only 50 Democratic senators (and a tie-breaker vote for VP-Elect Harris), 10 Republican Senators would be needed to overcome the Senate filibuster, where a bill would typically require 60 votes to move forward, thus making a bipartisan approach very unlikely. As such, fiscal stimulus will be through the process of Reconciliation. Although, even with a thin majority, moderates such as Democrat Senator Manchin will need convincing.

Market response will likely be felt most in US fixed income, which has been the case since Georgia state runoff elections. As markets repriced a blue wave, yields rose amid expectations of more deficit spending, resulting in higher issuance of treasuries. As such, the bond market will be closely watched throughout Biden’s speech.