Mexican Peso Holding its Own

A week into 2021, and it’s proven to be a tough go of sorts for emerging market currencies. While more US fiscal stimulus is good news for risk appetite broadly, EM FX has been double tapped by rising lockdowns and rising US Treasury yields. A short-term environment of weaker consumer demand from Western developed economies is taking shape, dinging the growth currency space – which EM FX occupies.

But the Mexican Peso, despite finding itself on weaker footing through the start of the year, is faring rather well. All things considered, the US Treasury 10-year yield has risen to its highest level since March 19, but USD/MXN rates are still holding below their December 2020 closing highs. Contextually, the price action suggests that the recent reversal higher may merely be a breather prior to another push lower.

USD/MXN traders will need to pay attention to the base currency for any action this week, as the quote currency sees little by way of events or data. In fact, the Mexican economic calendar is completely barren for the remainder of the week. Meanwhile, with the December US inflation report (CPI), December US retail sales, and numerous Federal Reserve policymakers speaking over the course of the week, it’s still possible that USD/MXN rates experience heightened price action, particularly if US Treasury yields continue to prove volatile themselves. 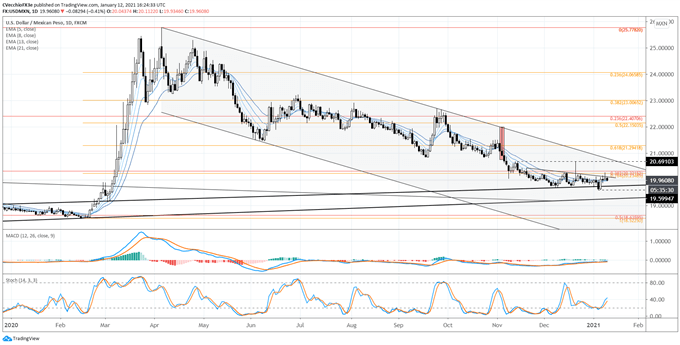 USD/MXN rates have turned higher at the start of 2021, but the consolidation seen since mid-November remains more or less in place (discounting intraday moves). Overall, USD/MXN rates remain in their parallel downtrend going back to the coronavirus pandemic high set in April. Just overhead, there are two significant Fibonacci retracement levels serving as resistance: the 76.4% retracement of the 2020 low/high range at 20.2349; and the 38.2% retracement of the past 10-years of trading low/high range (April 2011 low/April 2020 high) at 20.3215.

Momentum is effectively neutral after the recent reversal higher. USD/MXN rates are now below their daily 5-, 8-, 13-, and 21-EMA, which is in neither bearish nor bullish sequential order. Daily MACD is trending higher but below its signal line, while Slow Stochastics are starting to straddle their median line. More patience is required in the short- and long-term. 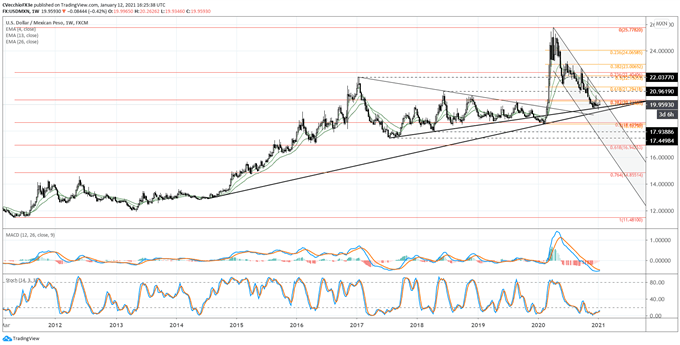 Momentum on the weekly timeframe has eased but remains more bearish than the daily timeframe. USD/MXN rates are below their weekly 4-, 13-, and 26-EMA envelope, which is in bearish sequential order. Weekly MACD is starting to turn while in bearish territory, however, and weekly Slow Stochastics have been rising while in oversold territory. The longer-term parallel channel biased to the downside remains the predominant perspective, as a period of ‘digestion’ – where the market works off extreme readings in indicators – creates a churn in price action, producing a sideways range for a period of weeks or months. 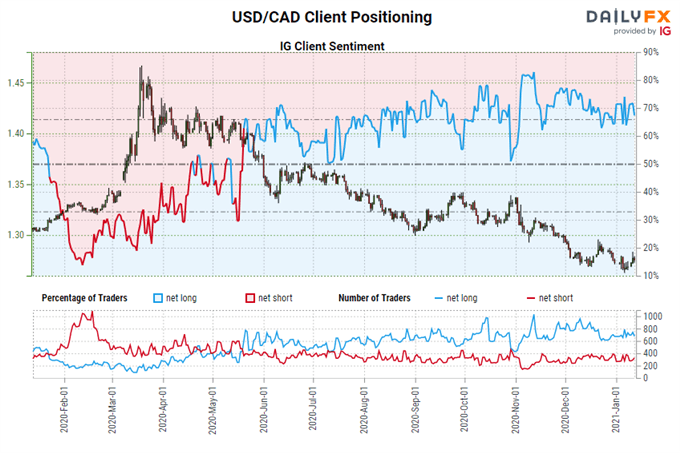