The Swiss Franc has been a prime beneficiary of early-month trading in December, with the safe haven surging ahead of its European counterparts in recent days. Of course, there’s an elephant in the room: Brexit. And given the recent news flow coming out of Brussels, it appears that a deal is coming down to the wire (even if UK Prime Minister Boris Johnson kicks the can and moves the goalposts, again).

The Swiss Franc has attracted capital flows during the Brexit saga whenever it appears more likely that a ‘no deal, hard Brexit’ will take place. Sparked by the short-term change in news flow around Brexit, GBP/CHF rates are holding at trendline support dating back to the yearly low, while EUR/CHF rates are still contending with the symmetrical triangle consolidation. 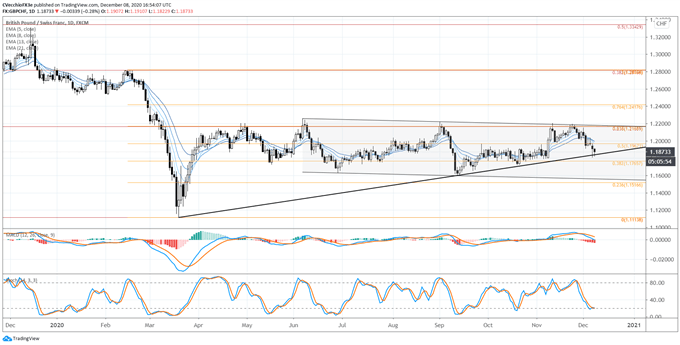 GBP/CHF rates have been the epicenter for concern around Brexit, with the pair shedding around -3% from its late-November highs through today. Support has been found at the start of this week twice at the rising trendline from the March, September, and October lows, suggesting that traders are unwilling to throw in the towel on a potential bullish move higher.

But it can’t be denied that bearish momentum has accelerated in the near-term, with GBP/CHF rates trading below their daily 5-, 8-, 13-, and 21-EMA envelope, which is in bearish sequential order. Daily Slow Stochastics are holding at the precipice of oversold territory, while daily MACD is quickly declining and has just started to move below its signal line.

Regardless of trading personality or style, the current setup doesn’t appear appealing when viewed in context of the sideways channel that has formed dating back to June: GBP/CHF rates are in the middle of a range, neither near support nor resistance within the consolidation. Accordingly, it’s too soon to suggest that GBP/CHF rates may not swing back higher, particularly if news breaks that a Brexit deal comes together – really anything above ‘no deal,’ that’s how low the bar is right now. 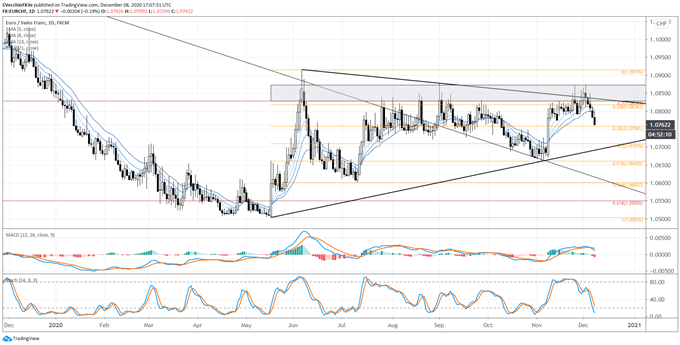 In our last update, EUR/CHF rates began to advance out of a symmetrical triangle in place since mid-May, following the break of the downtrend from the 2018 and 2019 highs. But EUR/CHF’s test of the 23.6% Fibonacci retracement of the 2018 high/2020 low range at 1.0857, and moreover, the area between 1.0857 and 1.0878 which produced several tops in recent months, ultimately saw the EUR/CHF bullish breakout attempt fail.

It was also noted that “gains through 1.0878 in the coming weeks would offer a strong sense of confidence that not only is the symmetrical triangle bullish breakout gaining pace, but that a longer-term bottoming effort has been commenced,” but such a development never occurred.

For now, weakness within the symmetrical triangle is back in play, suggesting that EUR/CHF rates could fall back towards 1.0700 over the coming weeks. Granted, news of a Brexit deal could spur a bullish reversal in EUR/CHF rates well before reaching 1.0700, given how low expectations are for any deal emerging at this juncture. 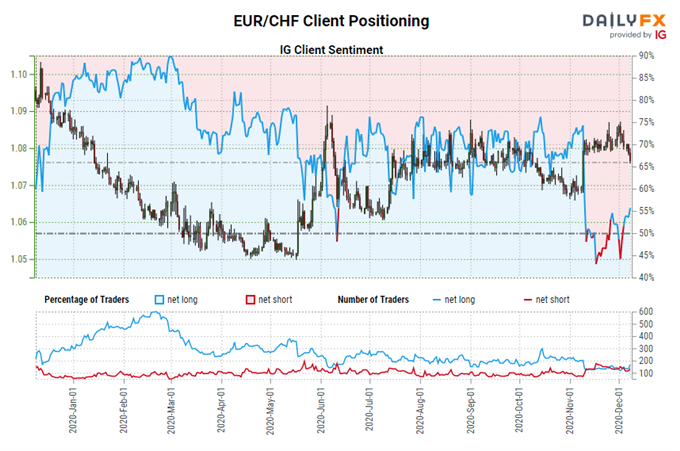 Traders are further net-long than yesterday and last week, and the combination of current sentiment and recent changes gives us a stronger EUR/CHF-bearish contrarian trading bias.