Will a Brexit Deal Force a Decisive Breakout in EUR/GBP Rates?

The long, winding road to Brexit may final have reached its destination: a deal should emerge in the coming days. After all, a deal needs to be signed by December 31, and as we’ve maintained for months, it has seemed highly unlikely that either EU or UK Brexit negotiators and political leadership would walk away from discussions due to competition issues or fisheries.

As the Bank of England has pointed out at the start of this week, no Brexit deal would produce a worse economic outcome than the coronavirus pandemic has thus far. Ultimately reaching a free trade agreement will avoid the ‘hard Brexit’ scenario feared, limiting the negative impact of increased tariffs and import taxes faced by the UK. Instead, the bite won’t be as harsh (but will still bite), and a Brexit will make a coronavirus pandemic recovery all the more difficult.

But markets know all of this already! Which is why pricing out any remaining ‘hard Brexit’ fears baked into GBP rates at present time will likely result in a further rally by the British Pound. One pair comes to mind given the recent trajectory of FX markets: EUR/GBP, which is already in the midst of a bearish triangle breakout. 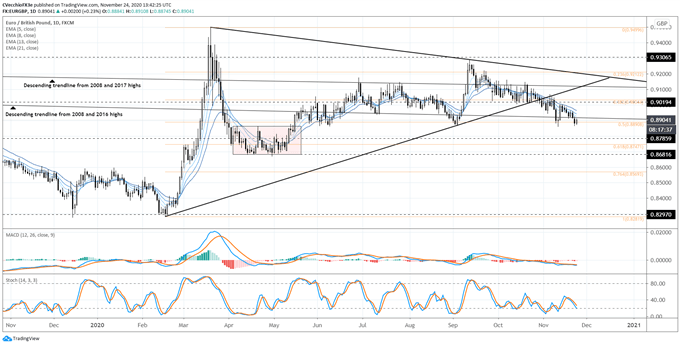 EUR/GBP rates have been trading sideways through July, but symmetrical triangle support from the February and September lows has broken (trading is a function of price and time, so a sideways move can force price outside of a consolidation, provided enough time has passed). A bearish break of the triangle is occurring all while EUR/GBP rates test at the descending trendline from the 2008 and 2016 highs.

Bearish momentum is gathering pace, if marginally. EUR/GBP rates are below their daily 5-, 8-, 13-, and 21-EMA envelope, which is in bearish sequential order. To this end, daily MACD remains in bearish territory and is trending lower, while Slow Stochastics have started to pull back below their median line. More weakness towards the November low (0.8861) can’t be ruled out.

A move below 0.8861 would also see the August swing low broken, confirming (from this strategist’s perspective) the bearish triangle breakout with an expected ultimate return back to the base near 0.8282. 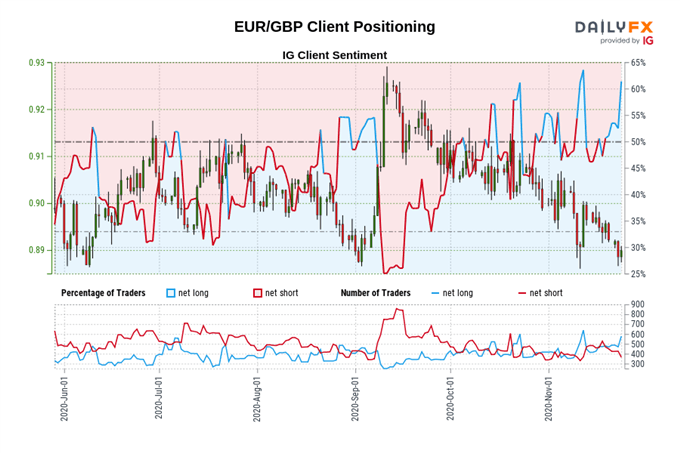 Traders are further net-long than yesterday and last week, and the combination of current sentiment and recent changes gives us a stronger EUR/GBP-bearish contrarian trading bias.