The Euro has emerged as the best performing major currency thus far through July, rekindling the bullish momentum that was present during late-May and early-June. While there has not been significant movement on the fiscal policy front – key meetings are set to take place on Friday and Saturday this week to (hopefully) finalize plans for a pan-European economic stimulus fund, a key step towards fiscal union – traders are proving more optimistic on the Euro as the region prepares to re-open ahead of North America, in particular, the United States.

Progress Towards Stability, Thanks to the ECB?

While the monetary policy front has been quiet as well – the July ECB meeting this coming Thursday promises little by way of fireworks – it is perhaps the ECB’s lack of significant support in context of its own historical performance – former ECB President Mario Draghi’s “whatever it takes” moment in July 2012 comes to mind – that has help pave way for the stability that the Euro is enjoying today.

Consider this. One of the running themes since The Great Recession has been that G10 central banks have been ‘the only game in town,’ in the words of Mohammed El-Erian. Because central banks have been so aggressive with their easing measures, the onus has been removed from fiscal policymakers to legislate long-term solutions to systemic economic woes. So while Draghi’s “whatever it takes” moment was good for the Euro in the short-term, staving off ruin, it ultimately removed pressure from politicians to reform their economies.

As paradoxical as it may sound, current ECB President Christine Lagarde’s comment that “we’re not here to narrow spreads” – a suggestion that it wasn’t the ECB’s job to reduce sovereign credit risk in the periphery relative to the core – may have been one of the sparks that ignited Germany and other core countries to embrace jointly-issued debt.

The ECB does not need to do much this week to keep investors’ heads cool regarding the economic recovery from the coronavirus pandemic. In fact, it may be argued that even just a marginally supportive ECB will be seen as enhancing the efforts made by policymakers, clearing the path for more Euro strength over a longer-term horizon.

EUR/USD rates had spent the month of June coiling into a symmetrical triangle, and forming in the context of an uptrend (the bullish breakout of the symmetrical triangle from mid-March to mid-May), the consolidation was favored to have a bullish resolution. Thus far, heading into mid-July, the bullish breakout attempt has gathered legs, with EUR/USD rates rising to what would be their second highest closing level of the year.

This is not the a second failed breakout attempt as feared earlier. EUR/USD rates continue to rally above EMA envelope, with the daily 5-, 8-, 13-, and 21-EMA envelope in bullish sequential order. Daily MACD is issuing a buy signal in bullish territory, while Slow Stochastics have risen into overbought territory. Bullish momentum is strong.

Gains towards the June high at 1.1423 should not be ruled out, nor should an attempt at the yearly high established at 1.1514. A break of the daily 5-EMA would warn that the current impulse higher is fading. 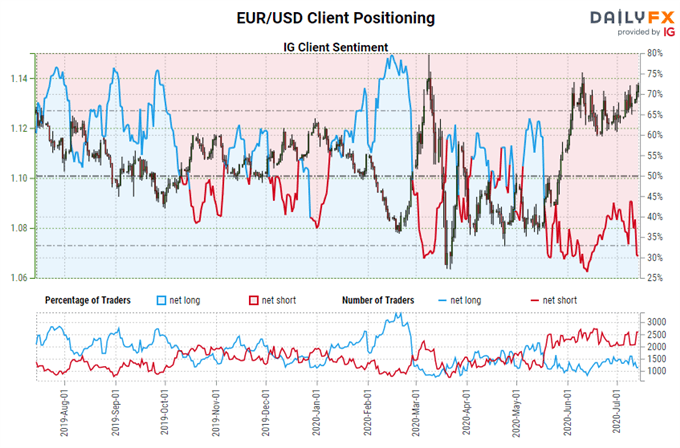 Like EUR/USD rates, EUR/JPY rates have shaken off signs of failure in the context of a false bullish breakout. The bullish morning star candle cluster established in recent days has produced a topside move that has carried EUR/JPY rates back above the rising trendline from the May and June swing lows. To this end, the triangular consolidation taking place in EUR/JPY rates during June has now yielded a topside breakout.

In clearing out near-term triangle resistance, EUR/JPY rats have also retaken the 23.6% retracement of the 2020 low/high range at 122.06. Gains through this area would increase the likelihood that EUR/JPY rates are primed for a return to what has proven to be a significant area of interest in recent years, between 123.65 and 123.88 – the area that proved to cap price action during the EUR/JPY rally in late-May/early-June. For now, with EUR/JPY rates holding above their daily 5-, 8-, 13-, and 21-EMA envelope, daily MACD issuing a buy signal in bullish territory, and Slow Stochastics on the verge of rising into overbought territory, the path of least resistance is higher. 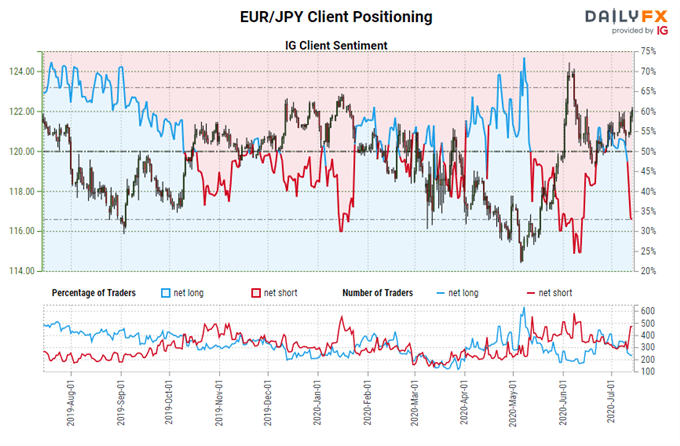