The past five weeks have been quite disappointing for the Euro, with some historic losses transpiring (see: EUR/AUD) amid a torrent of bad news. A lack of coordinated federalized European Union policy has left fiscal stimulus lacking, and the European Central Bank’s liquidity provisions have not been inspirational to the tune of “whatever it takes.” The recent German Constitutional Court ruling only makes things more difficult for policymakers in Europe.

It’s difficult to envision any significant recovery by the Euro, even if a bazooka like “whatever it takes” is fired, given how severe the economic fallout from the coronavirus pandemic appears to be. In this sense, until there is an overwhelming fiscal response, led by Germany, the Euro remains pliable for more losses.

Can the ECB Do More? The Euro is Desperate

Despite the ECB signaling its willingness to do more, particularly now that headline inflation readings are starting to pull back sharply, there scope for more aggressive, extraordinary monetary policy on the ECB’s part may be limited.

In normal times, the lack of ECB easing, relative to the extraordinary efforts that the Federal Reserve has set forth, would implicitly increase the relative yield advantage that the Euro has over the US Dollar. However, in times of crisis, the lack of a heavy-handed response by policymakers means that ‘it will get worse before it gets better’; paradoxically, the best thing for the Euro is much, much more stimulus from the ECB.

But the ECB has left markets in a situation where they are not impressed and increasingly disappointed. The lack of an immediate, near-term bazooka response a la former ECB President Mario Draghi’s “whatever it takes” is weighing on the Euro, in context of the backdrop of a less-than-ideal fiscal stimulus situation. 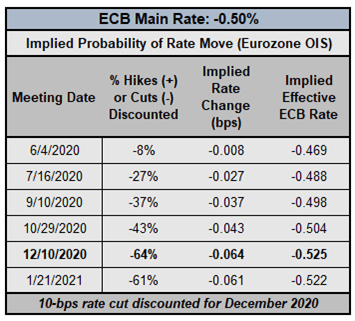 If the ECB finally decides to embrace more substance rate changes rather than working on the margins, traders believe that another interest rate cut is likely to come later this year, however, it won’t be for a while: the first month with an interest rate cut probability greater than 50% comes in December (64% chance of a 10-bps cut).

Recall that a few weeks ago, ECB Governing Council member Francois Villeroy de Galhau said that, with inflation falling below 2%, despite the fact that interest rates remain very low and liquidity remains ample, “if we had to do more to fulfil the price stability mandate entrusted to us by the (EU) treaties, we will do more." More action is coming, the question is, will it come fast enough?

The Reality: ECB Can’t Save the Euro Alone

After a decade of stagnant growth and failure to fully recover from The Great Recession and the Eurozone debt crisis, the European Union is ill-equipped to deal with the task at hand. The coronavirus pandemic demands coordinated efforts across institutions, borders, and boundaries, and in many respects, the EU has failed as its member states have failed one another.

It was only on April 9, after all, that the Eurogroup agreed to a rescue deal that clocks in at €540 billion (paltry compared to what the United States is doing), in part made available through the well-worn European Stability Mechanism (ESM). But the coronavirus pandemic has exposed an old wound: the desire by the less fiscally stable member states to have a federalized European budget. Germany, Austria, and the Netherlands remain opposed to jointly-issued debt among member states, otherwise known as “Eurobonds” – just as the bloc of northern member states did throughout the crisis of the past decade.

And so, the European Union may be nearing a breaking point anew. A lack of a federalized response mechanism, blockaded by the more fiscally stable members of the EU, may be the spark that forces countries to turn inward even faster – and tear the union apart. The ECB failed to inspire a meaningful recovery by the Euro, and now attention shifts back to the Euro more prominently reflecting this fundamental risk vis-à-vis pairs like EUR/JPY and EUR/USD. 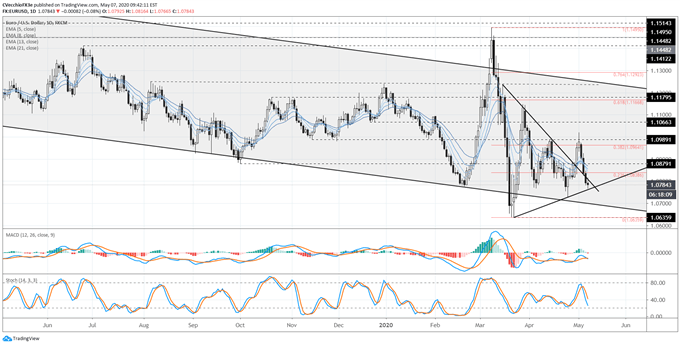 The downtrend that initially gave way to a topside breakout at the end of April appears to have failed. The symmetrical triangle consolidation that formed during the six week period has now seen EUR/USD rates return within, suggesting that a deeper pullback may soon emerge; false breakouts and return to consolidations often yield full reversals.

To this end, bearish momentum is accelerating in EUR/USD rates as the uptrend from the March and April lows comes into focus. EUR/USD rates are below their daily 5-, 8-, 13-, and 21-EMA envelope, which is not yet in full bearish sequential order. However, both daily MACD (issuing a bearish crossover below its signal line) and Slow Stochastics (turning lower below its median line) suggest that bearish momentum may continue to accelerate in the days ahead. 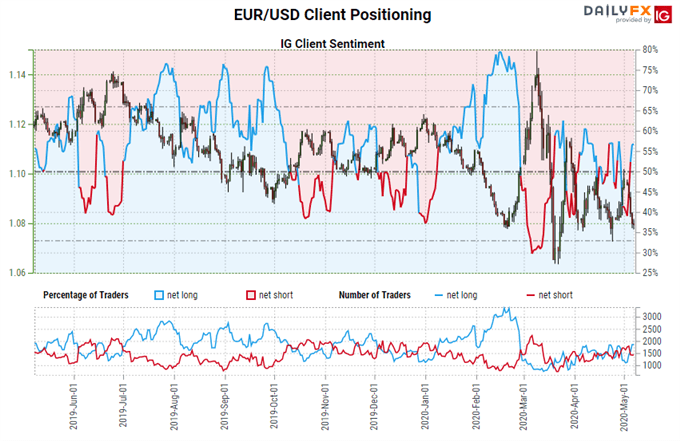 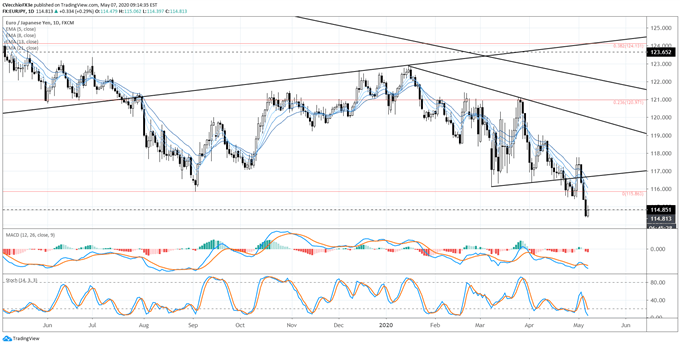 The most recent forecast update remains valid: “After failing at the rising trendline going back to the 2012, 2016, and 2019 swing lows at the start of 2020. EUR/JPY rates have traded below their 2019 lows, breaking out of the symmetrical triangle along the way. The longer-term context of losses dating back to the 2018 suggests that more downside may be imminent in EUR/JPY rates.” EUR/JPY rates set new yearly lows this week, and their lowest levels since 2017.

It thus remains that bearish momentum continues to gather pace. EUR/JPY rates are still below their daily 5, 8-, 13-, and 21-EMA envelope, which is in bearish sequential order. Daily MACD is trending lower in bearish territory, while Slow Stochastics are nestled in oversold condition. It would seem that all the pieces are in place for a more aggressive selloff in EUR/JPY rates. 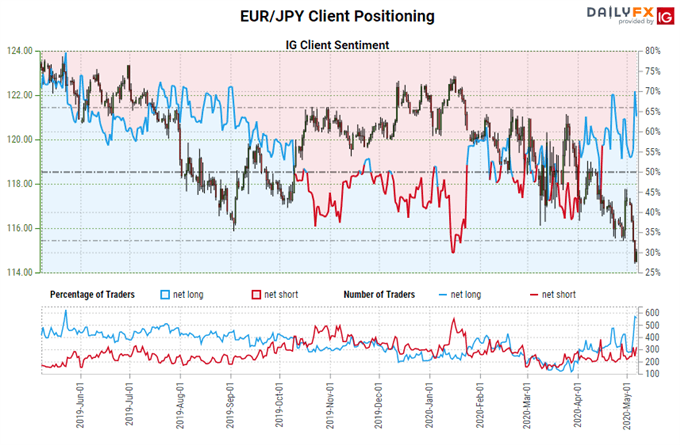