Euro Forecast: More Weakness Due in EUR/USD and EUR/JPY Rates?

The Euro has been seemingly quiet for the past few weeks, after having endured a burst of two-way volatility in March. Yet as all the attention has gone to global equity and commodity markets, the Euro has quietly been enduring a slow burn for the month of April, having lost ground versus every major currency: EUR/AUD is the worst performer, down by -5.57%; and EUR/CHF is the best performer, down by -0.80%.

And so while many of the headlines are about how dire the economic situation in the United States has become, it would appear that market participants are staking a more bearish claim to the situation in the Eurozone. Indeed, the coronavirus pandemic is proving to fray at the institutional bonds that tie the European Union’s 27 members together, once again bringing into question the long-term stability of the Euro project on the whole.

The backdrop of rapidly deteriorating economic data is not helping the Euro in any sense. The Citi Economic Surprise Index for the Eurozone, a gauge of economic data momentum, currently sits at -61.4 today, a sharp decline relative to its high of the year set on January 24 at 50.8 and its high prior to the impact of the coronavirus pandemic, set on March 16 at 14.3. Now that March and April economic data are starting to come into focus, more bad news seems destined on the horizon.

ECB Signals Willingness to Do More 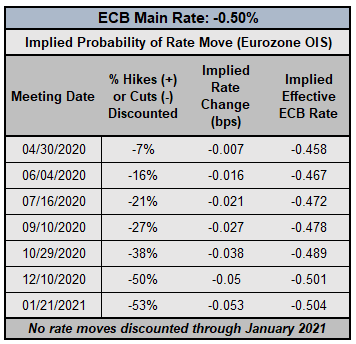 If and when the ECB finally steps up to the plate to deliver, traders don’t believe that it will do so through the typical interest rates channel. According to overnight index swaps, the ECB is not expected to change rates through the end of 2020 (50% chance by December for a 10-bps rate cut), and the pricing for January 2021 still does not rise past our threshold of 55% (currently sitting at 53%).

But traders should expect something soon. Over the weekend, ECB Governing Council member Francois Villeroy de Galhau said that, with inflation falling below 2%, despite the fact that interest rates remain very low and liquidity remains ample, “if we had to do more to fulfil the price stability mandate entrusted to us by the (EU) treaties, we will do more." 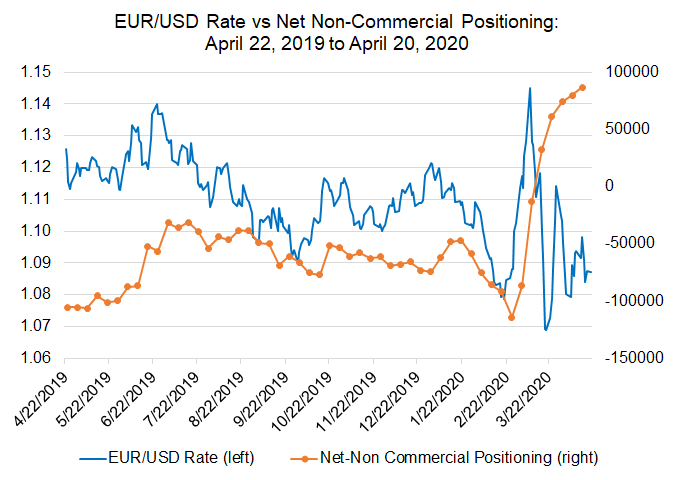 That the ECB may be considering new programs that are not currently priced into the market suggests that there may be more weakness ahead of the Euro. Perhaps the most potent aspect of a potential stretch of Euro weakness anew is the fact that positioning has built up so dramatically in recent weeks, despite the fact that the Euro has been the worst performing currency in April.

According to the CFTC’s COT report for the week ended April 14, speculators increased their net-long Euro positions from 79.6K to 86.6K contracts. Even as futures positioning has flipped from net-short to net-long over the past two months, EUR/USD rates have not been able to gain any topside traction. Oversaturated long positioning leaves the Euro at risk for a covering move that ultimately pushes the Euro lower. 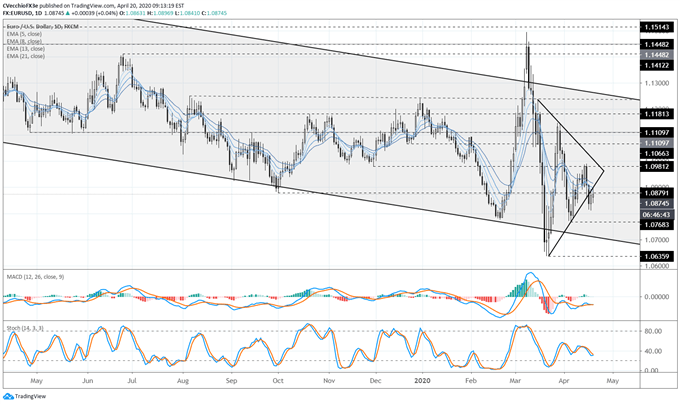 In the last update on the EUR/USD rate forecast, it was noted that the“symmetrical that has formed may retain a bearish bias, insofar as it was created after a sharp decline from the March highs.” For now, this statement holds.

Daily MACD is no longer rising while in bearish territory, while Slow Stochastics has fallenl back above its median line. There is currently little agreement among the daily 5-, 8-, 13-, and 21-EMA envelope, but the envelope is starting to bend to the downside.

Traders should remain neutral as symmetrical triangles dictate; but the downside breakout for EUR/USD rates is looking like it may gather pace soon. 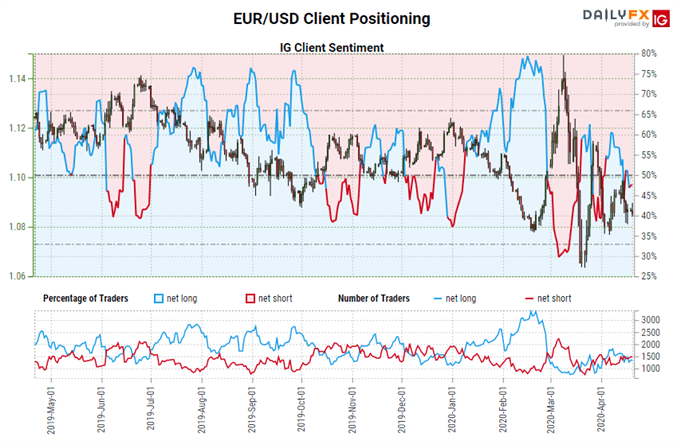 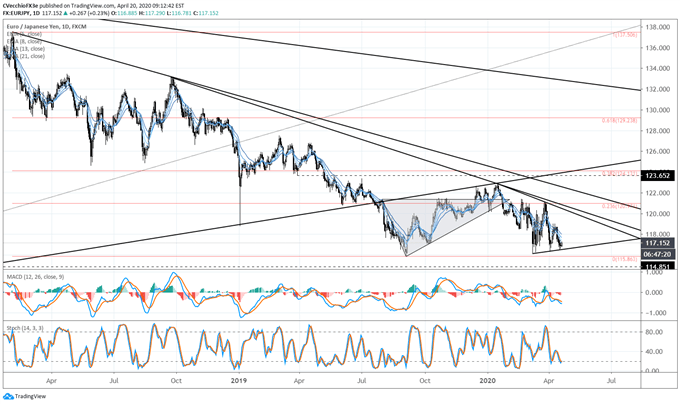 After failing at the rising trendline going back to the 2012, 2016, and 2019 swing lows at the start of 2020. EUR/JPY rates have traded back towards their 2019 lows, consolidating in a symmetrical triangle along the way. The longer-term context of losses dating back to the 2018 suggests that more downside may be imminent in EUR/JPY rates.

At present time, bearish momentum has started to gather pace again. EUR/JPY rates are below their daily 5, 8-, 13-, and 21-EMA envelope, which is in bearish sequential order. Daily MACD is trending lower in bearish territory, while Slow Stochastics have fallen into oversold condition. Bearish momentum may seem soft, but the conditions are in place for a more aggressive breakdown. 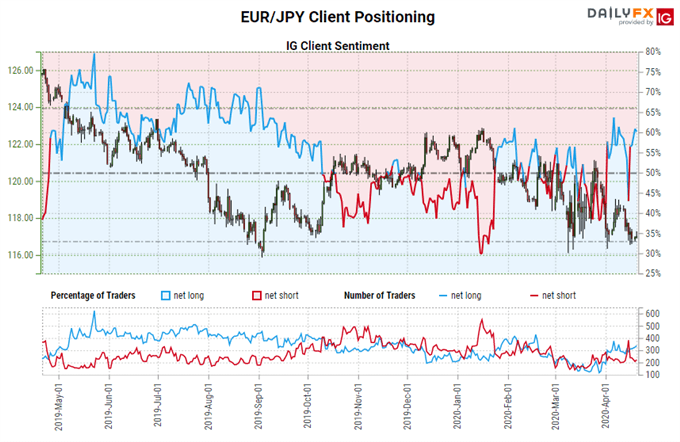