The Canadian Dollar endured a meaningful setback following surprise commentary at the January Bank of Canada rate decision. After striking an optimistic tone at the start of the year, noting that the Canadian economy had weathered the US-China trade war, BOC Governor Stephen Poloz effectively took a sentiment U-turn in noting that policymakers were uncertain if the recent slowdown in Canadian economic data was temporary or due to global factors.

Traders were caught off guard, largely expecting an anodyne BOC rate decision in light of the fact that interest rate markets were subdued: ahead of the January BOC meeting, traders were pricing in one 25-bps interest rate cut in 2020, due for October. Dour commentary coupled with a revision to the 2020 and 2021 GDP forecasts – the BOC sees the Canadian economy growing by 1.6% from 1.7% in 2020, and at 2% from 1.8% in 2021 – has provoked a material repricing of BOC rate cut odds. 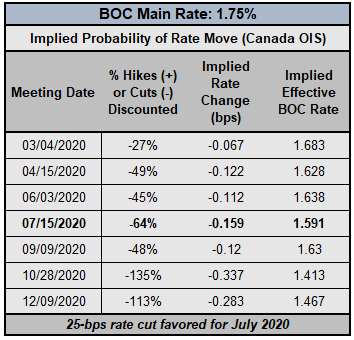 According to Canada overnight index swaps, rates markets are now pricing in an implied probability of 64% for the a 25-bps rate cut to come at the July BOC meeting – two months earlier than previously anticipated. Similarly, there is now a 35% chance that a second 25-bps rate cut comes at the October BOC meeting. At the start of 2020, rates markets did not have any interest rate cuts priced-in for 2020; this has been a dramatic escalation in a few weeks time. 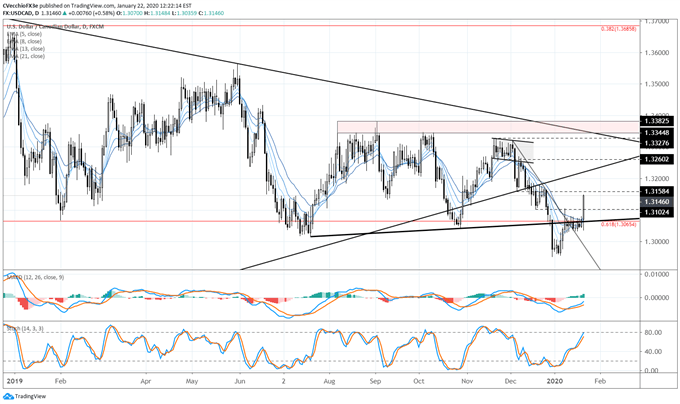 USD/CAD rates are working on a bullish outside engulfing bar today, suggesting further gains in the days ahead. Having cleared out the former monthly high set on January 9 at 1.3103, USD/CAD rates have a near-term bullish bias as a reversal within the congestion dating back to July transpires. A full-scale reversal within the sideways range would call for USD/CAD rates to climb back towards the mid-1.3300s over the coming sessions.

However, there are longer-term technical considerations in play that may curtail a significant reversal. The weekly chart offers important insight for traders, short-term and long-term alike. 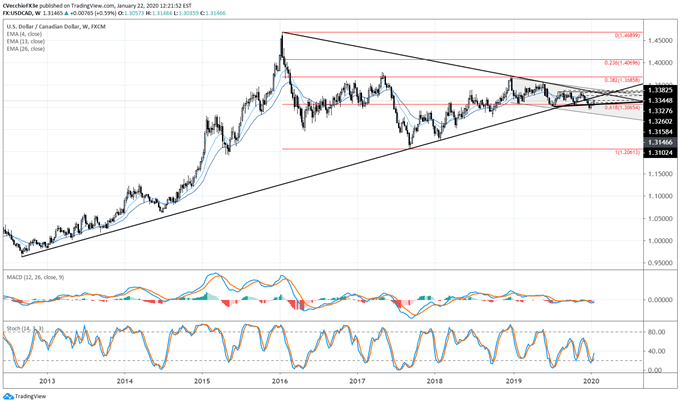 USD/CAD rates recently rebounded from the 61.8% retracement of the 2016 high to 2018 low range at 1.3065. While the return to the consolidation in place since July suggests a reversal towards 1.3350 is possible, traders may want to curb their enthusiasm for the time being: USD/CAD remains below the rising trendline dating back to the 2012 low.

This trendline comes into play closer towards 1.3225 through the rest of this week; failure here would signify that USD/CAD’s longer-term topping efforts may still be valid. To this end, however, if USD/CAD rates are able to clear 1.3225, we would begin to consider price action in recent months a “false breakout” scenario, ultimately calling for not only a return to 1.3350, but the beginning stages of a longer-term march higher towards the 2016 high at 1.4690. 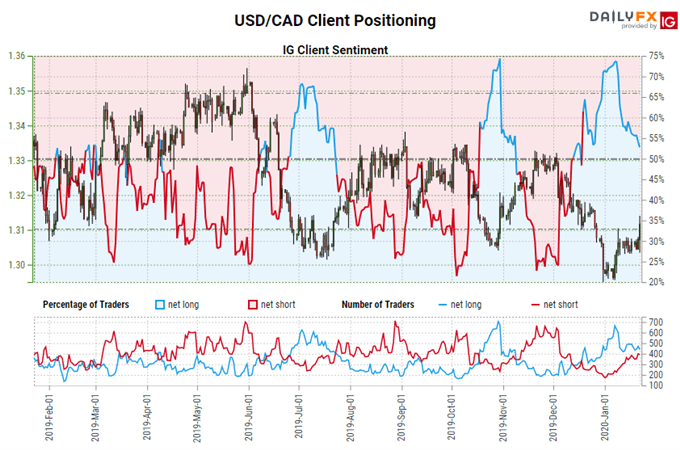