Canadian Dollar Rallies Alongside Oil Prices - Next Levels for USD/CAD

Looking for longer-term forecasts on the Canadian Dollar? Check out the DailyFX Trading Guides.

The Canadian Dollar took a hit at the end of last week when the November Canada jobs report posted an unexpected rise in the unemployment rate amid a surprising contract in jobs growth. The Canadian labor market data, released just days after the December Bank of Canada meeting, presented a meaningful opportunity for a repricing of BOC interest rate expectations.

Alas, market participants have failed to be swayed significantly by neither the November Canada jobs report nor the November US jobs report. With energy markets trading higher at the start of the week, the oil-sensitive Canadian Dollar has been able to continue its rebound after last week’s jobs reports that appeared to represent a significant turning point for USD/CAD rates. Instead, USD/CAD rates are likely to take cues from the December Fed meeting on December 11.

There’s little doubt that BOC policymakers were aware of the results of the November Canada jobs report when they convened less than 48-hours prior. To this end, BOC policymakers pushed back on the market’s perspective that more easing is coming shortly, thanks in part to receding concerns around a global recession and the overall resiliency of the domestic Canadian economy. 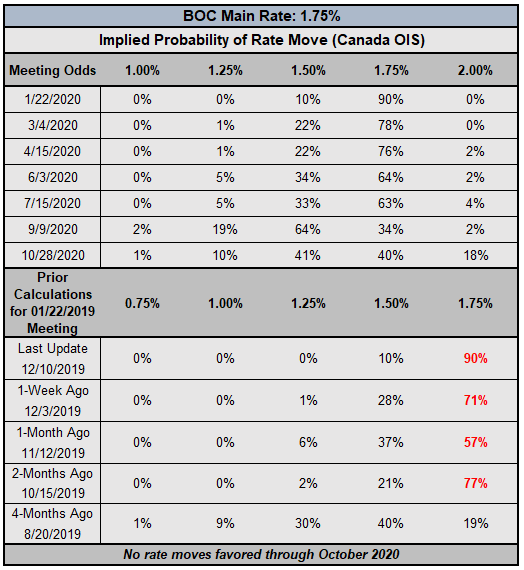 According to Canada overnight index swaps, the odds of a BOC rate cut in early-2020remains bleak after both the December BOC meeting and the November Canada jobs report. Last week, there was a 71% chance of no change in ratesat the January 2020 BOC meeting. Now, rates markets are pricing in a 90% of no change in rates. But for a quirk in pricing in the OIS curve, rates markets foresee no moves by the BOC through October 2020. 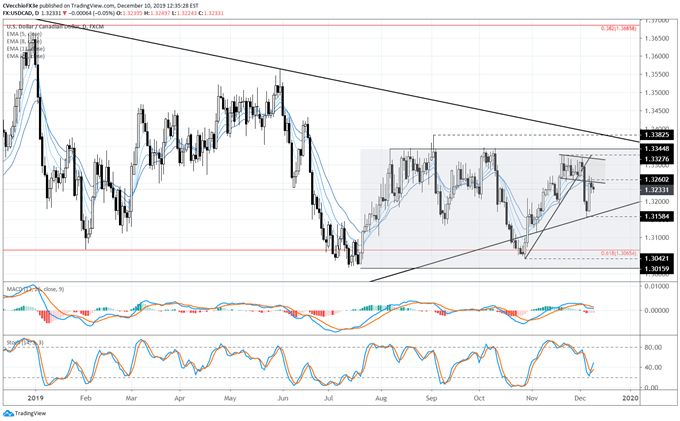 In the last USD/CAD rate forecast update, it was noted that “USD/CAD rates have carved out a sideways trading range since early-July between 1.3015 and 1.3383, and the latest price action developments suggest that the range will continue to hold.” Support was found last week at the rising trendline from the 2012 and 2018 lows.

To this end, USD/CAD rates failed to climb back into their late-November bull flag and remain below the rising trendline from the late-October and mid-November swing lows. USD/CAD rates may still have a bias to the downside given the recent treatment of former flag support as resistance.

USD/CAD rates are back below the daily 5-, 8-, 13-, and 21-EMA envelope, which is aligning in bearish sequential order. Daily MACD is trending lower (albeit in bullish territory), while Slow Stochastics are throttling the median line with an upside bias.

It still holds that “traders may want to be patient within the range before any breakout or momentum trading strategies are deployed.” The range within the range may prove actionable: between 1.3158 (December low) and 1.3345 (November high). 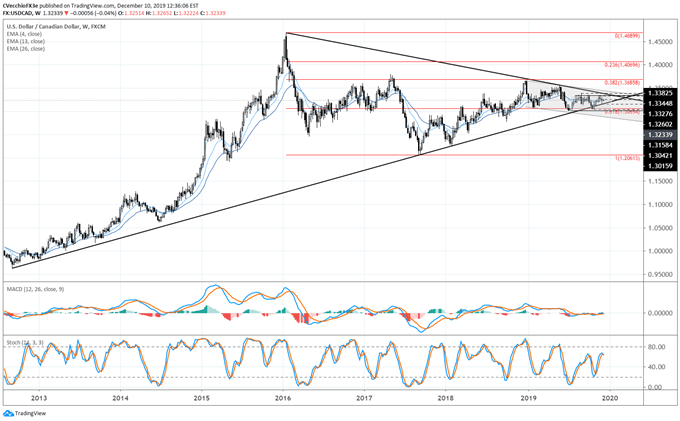 The longer-term perspective established last week remains valid. “USD/CAD’s rebound in November [came] after the pair found two significant support regions at the end of October. First, USD/CAD rates found support on the trendline from the 2012 and 2017 lows. Second, USD/CAD was able to turn higher from the 61.8% retracement of the 2016 high to 2018 low range at 1.3065.

With gains in recent weeks, USD/CAD has turned above its weekly 4-, 13-, and 26-EMA envelope. Weekly MACD is treading higher but remains below its signal line. Meanwhile, Slow Stochastics is turning lower, although it remains above its median line.

As USD/CAD dates winnow into the terminal point of the symmetrical triangle carved out between the 2012 low and 2016 high, traders should envision price action like a coiling spring: the range represents potential energy being stored; we’re waiting the breakout move, the kinetic energy. 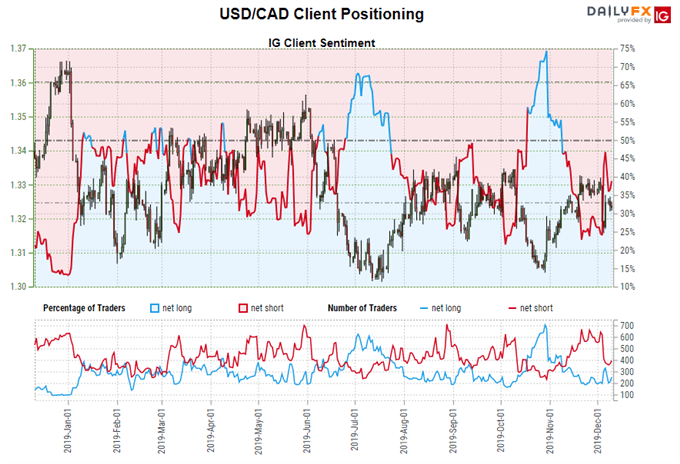 We typically take a contrarian view to crowd sentiment, and the fact traders are net-short suggests USD/CAD prices may continue to rise. Positioning is more net-short than yesterday but less net-short from last week. The combination of current sentiment and recent changes gives us a further mixed USD/CAD trading bias.