The Euro’s first half of November thus far has left much to be desired. In the past two days, several EUR-crosses have hit fresh monthly lows, including EUR/CHF, EUR/JPY and EUR/USD. Weakness during the US session on Tuesday accelerated after remarks by US President Donald Trump at the Economic Club of New York in which he criticized the current EU-US trade deal. The remarks, which were critical of China as well, may be stirring some concern about Phase 1 of the US-China trade deal, which has provoked a reach for the safe haven currencies.

The forex economic calendar has produced mixed results for the Euro in recent days, and the rest of the week is littered with meaningful data (notably, German and Eurozone inflation data from October). Despite the light data flow, economic data momentum has continued to improve as weaker readings from the summer months rolls off the trailing three-month lookback window. The Citi Economic Surprise Index for the Eurozone, a gauge of economic data momentum, is at -16.4, from -71.6 on October 15 and -62.9 on August 13.

There has been a good deal of pushback around the ECB in recent weeks, insofar as calls for less monetary stimulus and more fiscal stimulus (cough, Germany) have dominated the news wires. With new ECB President Christine Lagarde seeking to clear divisions among ECB Governing Council members – a result of former ECB President Mario Draghi ramming through his easing package at the September ECB meeting – it seems likely that the ECB will be sitting on its hands for the time being. 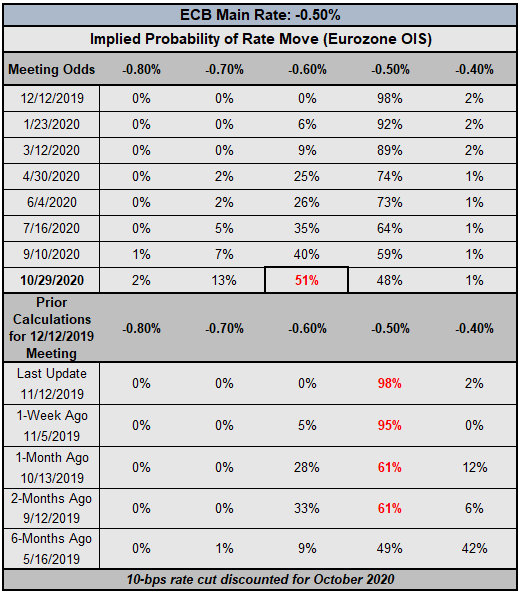 According to overnight index swaps, traders are convinced that the period of recalibration by new ECB President Lagarde will take several months: there is only a 9% chance of a rate move through March 2020. Nevertheless, the chance of an ECB rate cut over the next 12-months has increased slightly in recent days: last week, there were no rates moves discounted through October 2020; now, there is a 51% chance of 10-bps rate cut in October 2020. 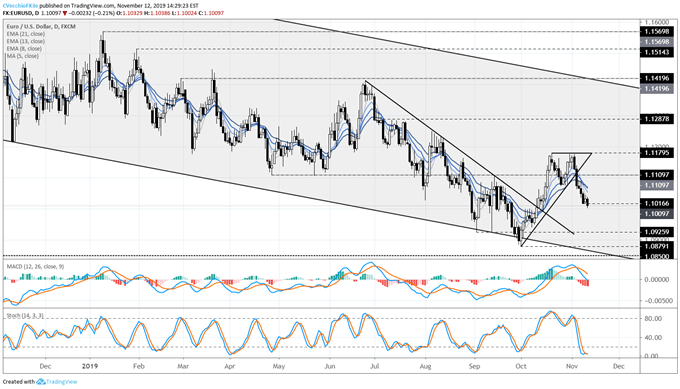 In our last EUR/USD rate forecast technical analysis update, it was noted that “it’s no longer the case that a meaningful bottom has been established…the path of least resistance appears to be to the downside in the near-term.” With fresh monthly low established today, it still holds more weakness may be on tap for EUR/USD.

EUR/USD rates remain below their daily 5-, 8-, 13-, and 21-EMA envelope, which has aligned in bearish sequential order. Daily MACD has started to trend lower into bearish territory while Slow Stochastics have buried themselves into oversold territory. Now that last week’s low of 1.1017 has given way, traders may see EUR/USD continue to decline towards the early-September lows near 1.0926. 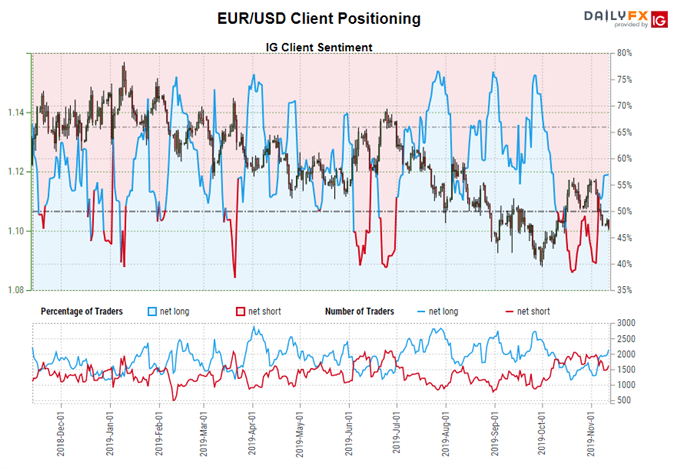 We typically take a contrarian view to crowd sentiment, and the fact traders are net-long suggests EUR/USD prices may continue to fall. Traders are further net-long than yesterday and last week, and the combination of current sentiment and recent changes gives us a stronger EUR/USD-bearish contrarian trading bias. 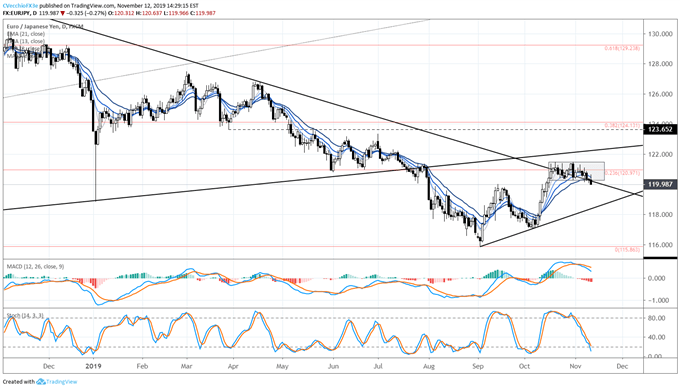 In our last EUR/JPY rate forecast technical analysis update, it was noted that “traders may want for the recent two-week range to break prior to any decisions.” Today, the range has started to see support give way, setting up a bearish breakout situation. By breaking to the downside, EUR/JPY failed around the descending trendline from the September 2018 and April 2019 highs, as well as the 23.6% retracement of the 2018 high/2019 low range at 120.97.

EUR/JPY rates are now below the daily 5-, 8-, 13-, and 21-EMA envelope, which is in bearish sequential order. Daily MACD continues to decline (albeit still in bullish territory), while Slow Stochastics have reached oversold territory. Like for EUR/USD, the path of least resistance appears to be to the downside in the near-term for EUR/JPY. 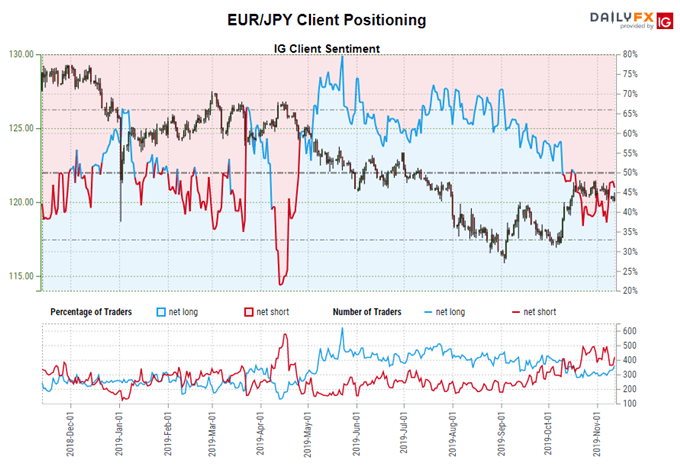 We typically take a contrarian view to crowd sentiment, and the fact traders are net-short suggests EUR/JPY prices may continue to rise. Positioning is more net-short than yesterday but less net-short from last week. The combination of current sentiment and recent changes gives us a further mixed EUR/JPY trading bias.