Flaring concerns about the US-China trade war are weighing on the US Dollar, in turn sending Euro rates in different directions.The lack of demand for the US Dollar amid lower US Treasury yields is a clear driver behind the divergence: EURUSD is up and USDJPY is down.

Sparking the turn in FX markets were comments made by US President Donald Trump in his speech at the United Nations General Assembly. The tones of the speech sounded familiar to anyone paying attention to domestic US politics since 2015; yet that is a noticeable development in and of itself. The sharp rhetoric on China may be spooking investors that hopes for a potential deal to end the US-China trade war is slipping away.

Despite the round of Eurozone PMIs yesterday, the Euro has been able to retake some of its losses in an environment defined by a struggling US Dollar. After all, the US-China trade war is an existential threat to US Dollar hegemony. With traders refocusing on the clash between the world’s two largest economies, the Euro’s own malaise has been ignored.

ECB President Mario Draghi spoke yesterday about the bleak economic outlook for the Eurozone, suggesting that more easing may be yet to come. Eurozone economic data is struggling once again, relatively speaking. The Citi Economic Surprise Index for the Eurozone, a gauge of economic data momentum, is currently at -64.9; one month ago, it was at -42; and three months ago, it was 0.6. 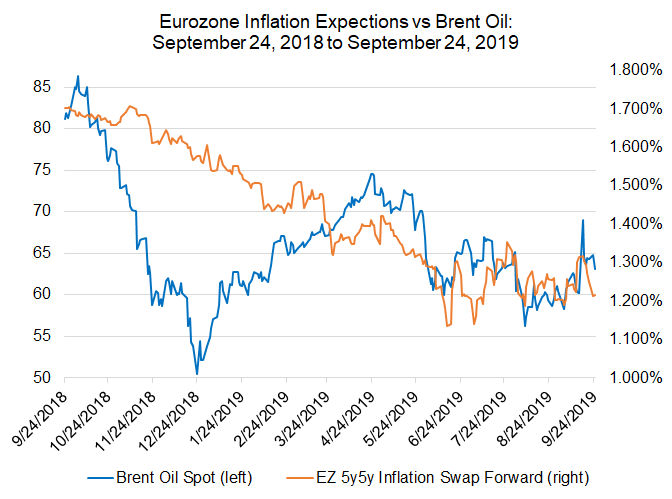 Outgoing ECB President Mario Draghi’s preferred measure of inflation, the 5y5y inflation swap forwards, are currently trading at 1.215%, lower than where they were one month earlier at 1.261%. The brief blip higher in inflation expectations around the September ECB meeting may otherwise be attributed to the jump in Brent oil prices around the attacks on Saudi Arabia’s Abqaiq processing plant.

Following the September ECB meeting, interest rate markets are still pricing in more easing over the coming months.Given the tone deployed by outgoing ECB President Draghi in recent days – and what is expected in his next speech on Thursday in Frankfurt -- forward guidance is leaving the door open to more rate cuts. 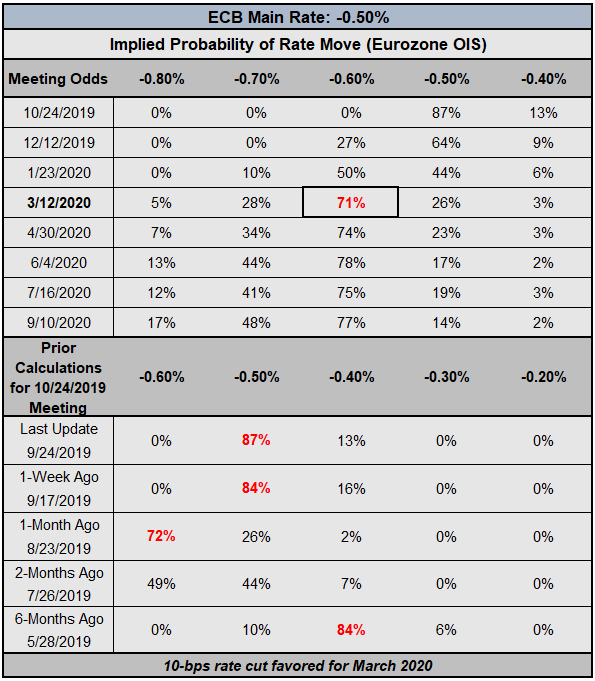 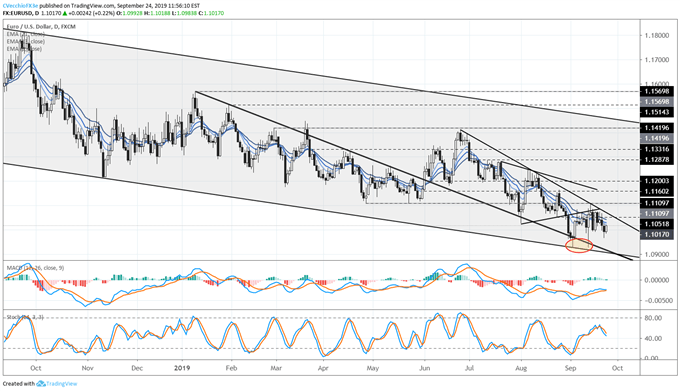 EURUSD rates have been able to maintain elevation after finding channel support dating back to the August and November 2018 lows as well as the descending trendline from the January and April 2019 swing highs. In the post-September ECB meeting world, a new range has been carved out between the yearly low at 1.0926 (the September ECB meeting low was 1.0927) and 1.1110, the late-April and late-May 2019 swing lows. As a result, we’re now seeing a range form for EURUSD between 1.0926 and 1.1052. The measured target on a bullish reversal attempt higher would be 1.1294. 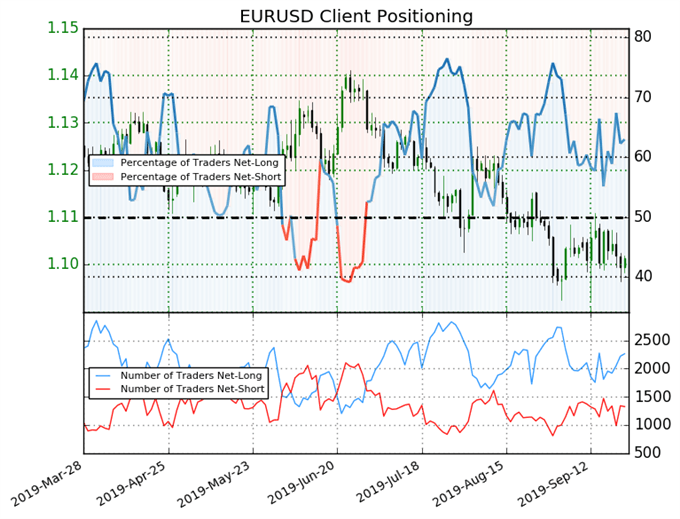 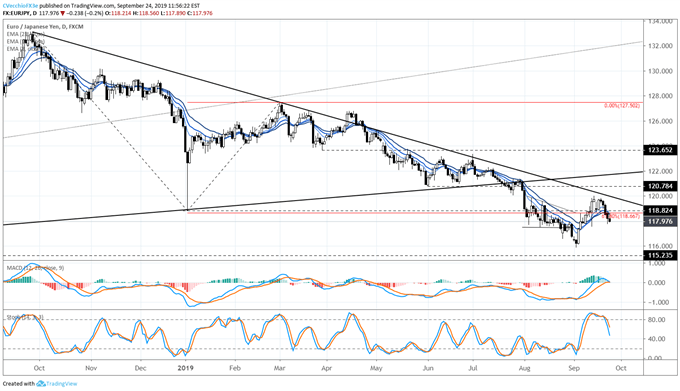 EURJPY rates continue to hang around the 61.8% Fibonacci extension of the September 2018 high to January 2019 low to March 2019 at 118.67. Importantly, the descending trendline from the September 2018 and March 2019 highs has yet to be breached to the topside suggesting that longer-term bearish inclinations persist.

EURJPY is now below its daily 8-, 13-, and 21-EMA envelope, which is aligning in bearish sequential order. Daily MACD and Slow Stochastics are turninglower(albeit in bullish territory), though both are nearing sell signals below their respective median or signal lines. The uptrend from the intramonth swing lows has been broken; the path of least resistance is now lower for EURJPY. 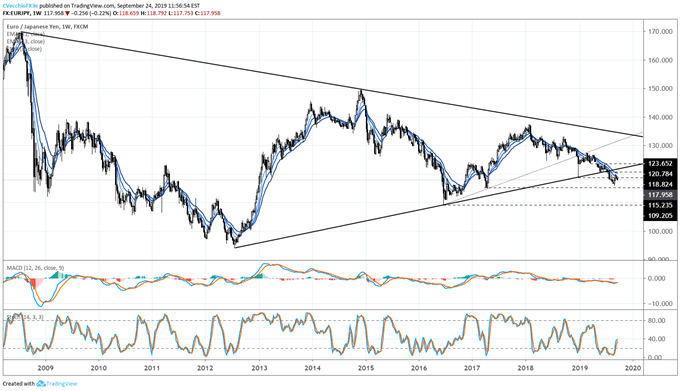 Big picture: we may be in the early phases of what could be a long-term downtrend for EURJPY with the weekly timeframe suggesting a loss of triangle support from the 2012 and 2016 lows and recent swing support at the January 2019 Japanese Yen flash-crash low at 118.82. The 2017 low at 115.24 can’t be ruled out later this year. 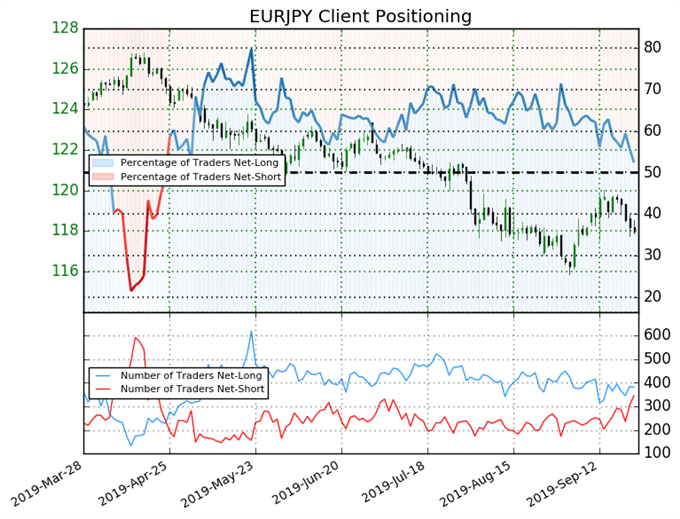