The final weeks of August are usually a quiet time for global financial markets as computer screens are traded for sunscreen. But this year has been different: with the US-China trade war raging, the October 31 Brexit deadline coming into focus, and global growth concerns coming into focus, the news wire has been a veritable source of event risk as market participants await comments from politicians and central bankers alike to help guide their investment decisions. Today has proven no different.

There’s no reason to split hairs: incoming ECB President Christine Lagarde sounded very dovish this morning across prepared remarks to the European Parliament. Starting softly, the ascendant central banker noted that the ECB has a “broad tool kit” and “must stand ready to act.” So far, par for the course; she sounds like outgoing ECB President Mario Draghi.

But where Lagarde differs from Draghi may be her willingness to go more dovish in a forceful manner, in a short period of time. In her letter to the European Parliament, Lagarde noted that the ECB “hasn’t hit the lower bound on interest rates,” suggesting that, unlike her predecessor, she will be willing to aggressively push interest rates deeper into negative territory.

With incoming ECB President Lagarde turning up expectations for aggressive dovish policy action, interest rates markets have responded in kind by dragging forward rate cut expectations. At the end of the day yesterday, according to overnight index swaps, there was a 100% chance of a 10-bps rate cut at the September ECB meeting and a 10% chance of a 20-bps cut.

For the ECB, there may be good reason to look to cut interest rates. The Eurozone’s largest economy, Germany, is quickly approaching a ‘technical’ recession, or two consecutive quarters with contracting GDP. Overall, Eurozone economic data has remained disappointing in recent weeks, at least as measured by looking at economic data from an objective point of view.

The Citi Economic Surprise Index for the Eurozone, a gauge of economic data momentum, is currently at -41.3; one month ago, it was at -37.5. The disappointing streak of Eurozone data continues in in parallel with rising growth concerns swirling around the US-China trade war. 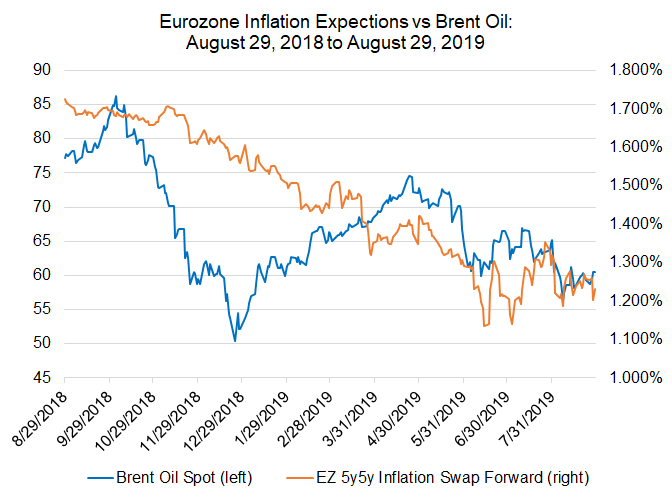 Outgoing ECB President Mario Draghi’s preferred measure of inflation, the 5y5y inflation swap forwards, are currently trading at 1.2481%, lower than where they were one month earlier at 1.3315%, but still significantly above the yearly low set on June 17 at 1.141%. Regardless; these are market readings that will reinforce speculation for more easing from the ECB soon. 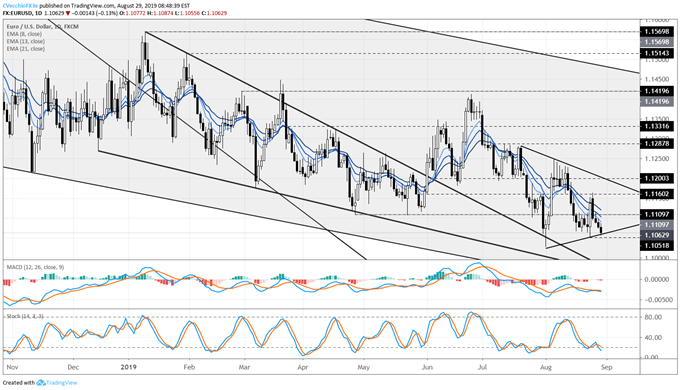 In our last EURUSD technical forecast update, it was noted that “the attempt by EURUSD to breakdown out of the symmetrical triangle has been thwarted in the form of a bullish key reversal/outside engulfing bar on the daily timeframe…The symmetrical triangle pattern is still neutral, but traders may want to focus on the topside potential once more.” This was only half correct: the triangle is indeed neutral; but traders should not be focusing on topside potential, instead, on downside potential.

The EURUSD symmetrical triangle that’s been forming since mid-July is now seeing support from the August 1 and August 23 lows come into focus near 1.1060. Price is now below the daily 8-, 13-, and 21-EMA envelope, while daily MACD and Slow Stochastics have turned lower in bearish territory. The August 23 bullish key reversal/outside engulfing bar low comes into play at 1.1052; below here, then a bearish breakout may be afoot. 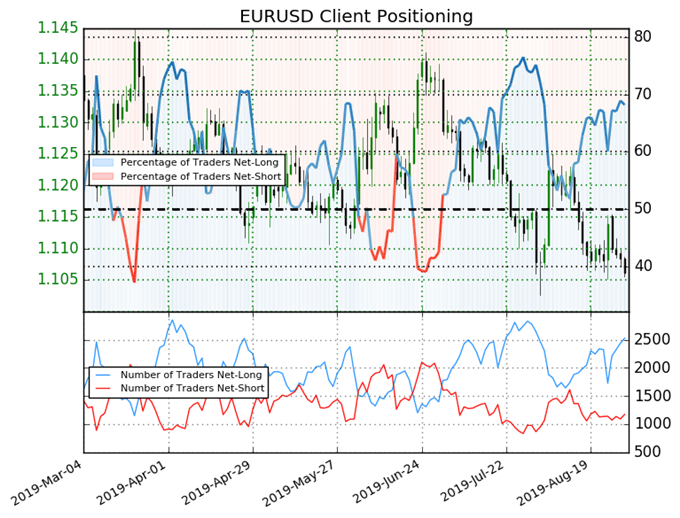 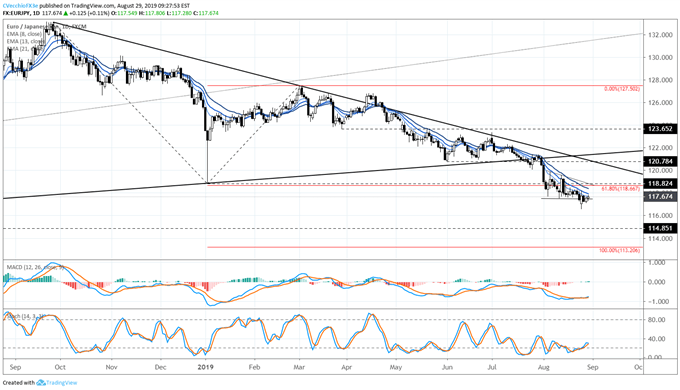 In our last EURJPY technical forecast update, it was noted that “by market close on Friday, August 23, EURJPY had broken out of its symmetrical triangle to the downside.” There hasn’t been much follow through in recent days, however: the Friday close was at 117.42; EURJPY rates have traded between 116.56 and 118.20 this week (1.38% range).

The lack of follow through in the bearish breakout has seen momentum indicators like daily MACD and Slow Stochastics turn higher, albeit holding in bearish territories. EURJPY rates are holdingat the daily 8-EMA, and remain below both the daily 13-, and 21-EMAs. The 100% Fibonacci extension of the September 2018 high to January 2019 low to March 2019 high move comes in at 113.21, which looks increasingly in playthe longer that EURJPY spends below the 61.8% Fibonacci extension at 118.67. 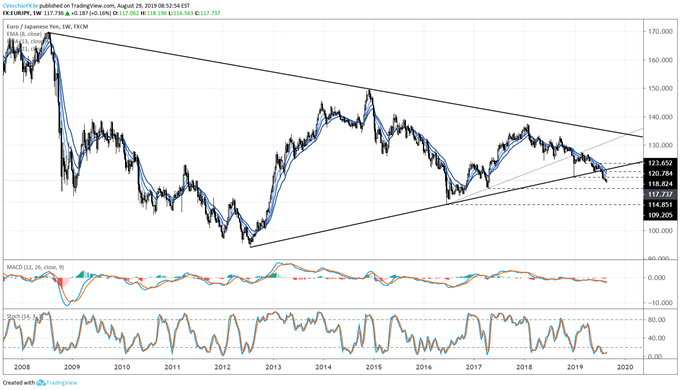 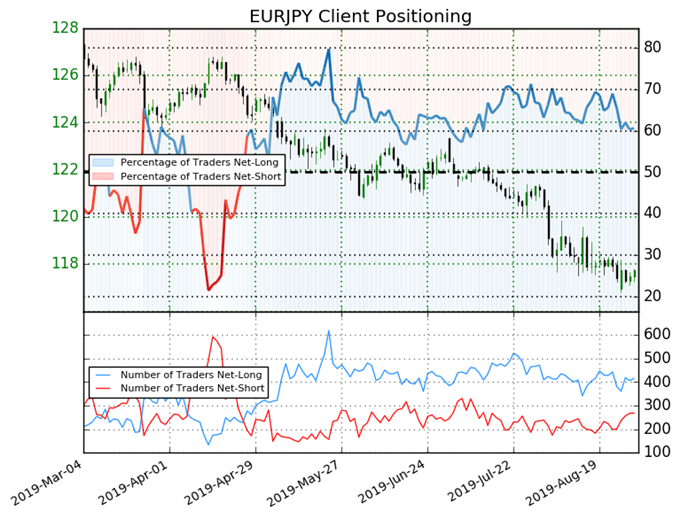