It’s been a topsy-turvy few days for markets – no other way to describe it, really – thanks to the ebb and flow of the US-China trade war. While the imposition of Chinese tariffs on US imported goods on Friday elicited a quick retaliation by US President Trump, the reconciliatory tone taken at the G7 summit in France has given traders reason for pause.

By declaring he’s having “second thoughts” about escalating the US-China trade war further, the US president has given hope to market participants that the rift between the world’s two largest economies won’t ratchet up any more from here.

In the very short-term, we’ve seen risk appetite improve across the globe, with higher yielding currencies and high beta assets perform well since US markets opened on Monday, August 26. In this same vein, as global growth concerns ease, growth-sensitive commodities like crude oil are showing signs of stability, while in turn commodity-sensitive currencies like the Canadian Dollar are reversing their recent losses. 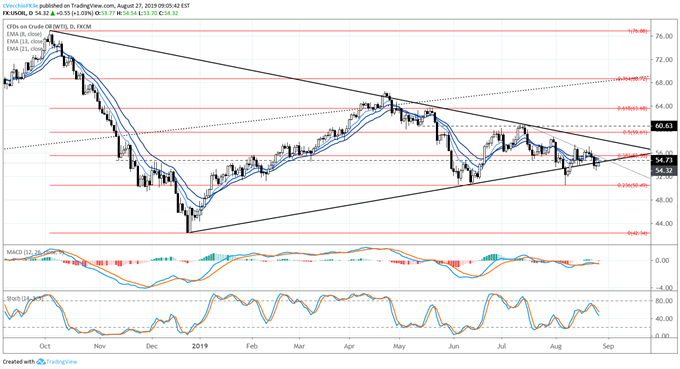 Crude oil prices were starting to breakdown out of a multi-month symmetrical by the end of last week, but it now appears that another false breakout has occurred – not dissimilar from the false breakout crude oil prices experienced two weeks ago. The trendline from the December 2018 and June 2019 lows continues to act as a magnet for price.

Momentum in crude oil prices is flat at present time. Price is intermeshed among its daily 8-, 13-, and 21-EMA envelope. Daily MACD is trending lower in bearish territory, while Slow Stochastics have turned lower in bullish territory. That there is a lack of agreement among the technical indicators is clear; if crude oil prices are enduring another false breakout attempt, a ‘return into the symmetrical triangle’ may be judged upon a return back above the daily 21-EMA, currently 55.14. 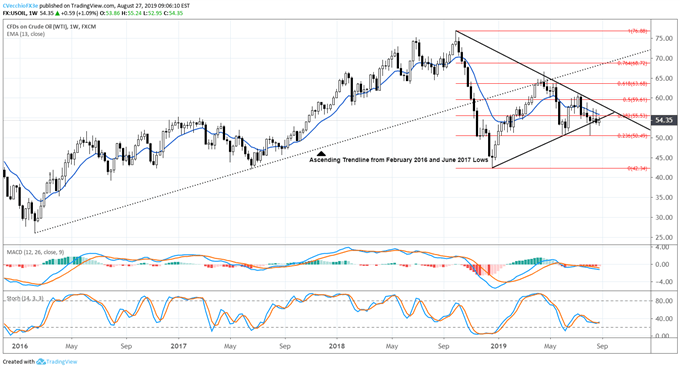 Longer-term, the crude oil price weekly chart continues to suggest that bearish potential persists for a more significant breakdown over the next few weeks. Back-to-back inverted hammer candles on the weekly timeframe warns of significant overhead selling pressure. Both weekly MACD and Slow Stochastics remain in bearish territory. Until crude oil prices break the downtrend from the 2018 high, there is little reason to have a bullish bias beyond a short-term timeframe. 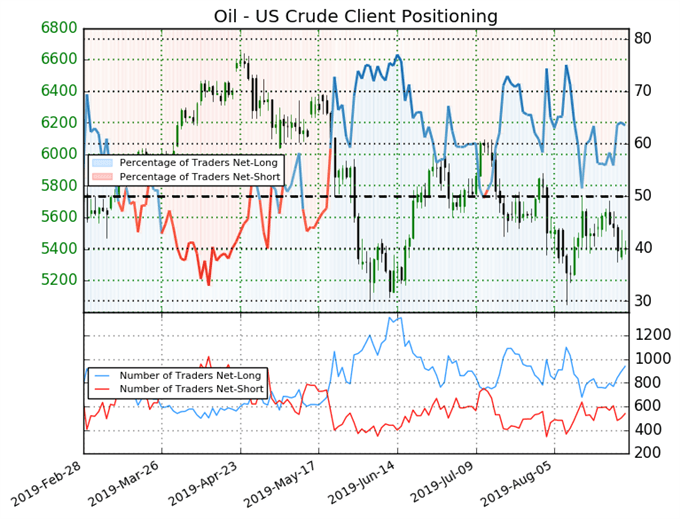 It stands to reason that the USDCAD and crude oil price relationship may be distorted for the foreseeable future, so long as the US-China trade war rages. 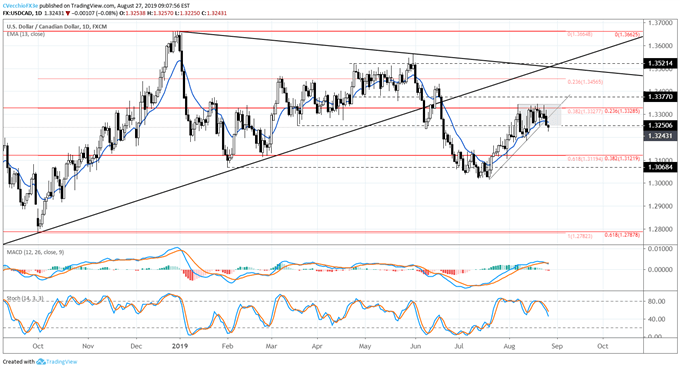 Now that crude oil prices have stabilized, USDCAD prices have been able to reverse meaningfully. The pair is no longer holding in its triangle consolidation pattern below the 23.6% retracement from the September to December 2018 high/low range as well as the 38.2% retracement of the 2018 high/low range around 1.3325/30. Indeed, the uptrend from the July and early-August swing lows broke yesterday. The path of least resistance is no longer to the topside in the near-term. A deeper pullback would increase in probability should USDCAD close below 1.3250. 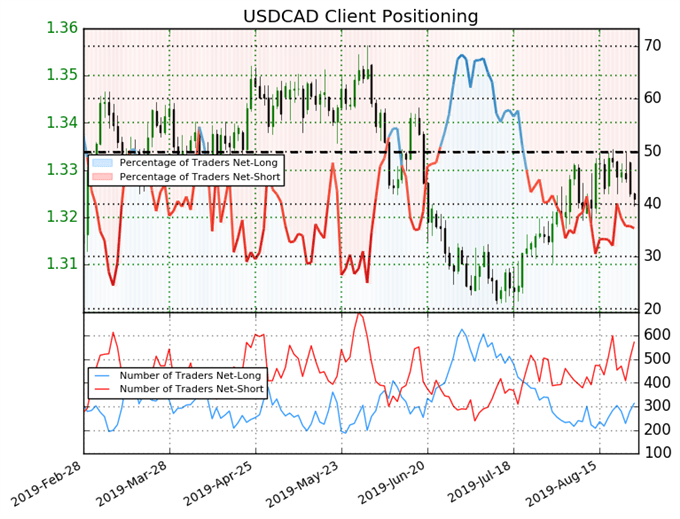