So much for the US-China trade war détente. Just hours ahead of remarks due in from Federal Reserve Chair Jerome Powell at the Jackson Hole Economic Policy Symposium, Chinese policymakers decided to shock markets with two rounds of tariffs on imported US goods.

The tariffs will range from 5% to 10% on $75 billion of imported US goods, divvied up into two tranches on September 1 and December 15 – no coincidence considering that these are the dates that the US has considered implementing 10% tariffs on $300 billion of imported Chinese goods.

As a result of the surprising Chinese tariff news, global growth concerns are back in the picture. To no surprise, crude oil is bearing the brunt of the news. There are implications for the commodity currencies, particularly the Canadian Dollar. 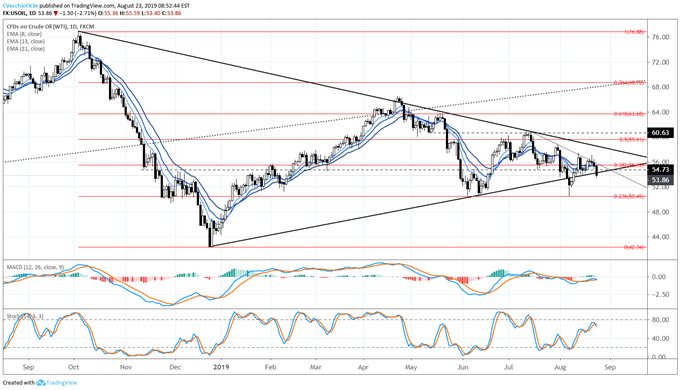 Crude oil prices are starting to breakdown out of a multi-month symmetrical. The false breakout crude oil prices experienced two weeks ago, around the trendline from the December 2018 and June 2019 lows, initially found support around the June 2019 swing lows and the 23.6% retracement of the 2018 high/low range near 50.49.

Now that the attempt to get back into the symmetrical triangle is proving to be a failure – the rebound in crude oil prices was rejected by the trendline from the July and August swing highs – more downside may arrive quickly. Price is trending lower below the daily 8-, 13-, and 21-EMA envelope while both daily MACD and Slow Stochastics have turned lower again. A return towards the June and August swing lows near 50.49 can’t be ruled out in the near-term. 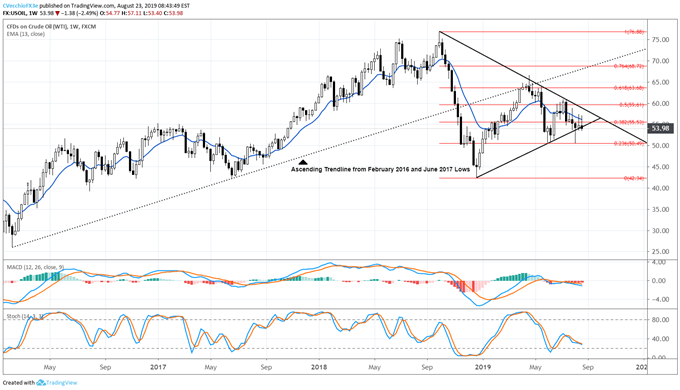 Longer-term, the crude oil price weekly chart continues to suggests that bearish potential persists for a more significant breakdown over the next few weeks. It appears that, for the second consecutive week, we’ll see an inverted hammer on the weekly candle after a rejection at the weekly 13-EMA (one quarter moving average).

With daily MACD and Slow Stochastics pointing lower in bearish territory, momentum remains to the downside. It still holds that failure in the symmetrical triangle points to an ultimate return to the December 2018 low at 42.34. 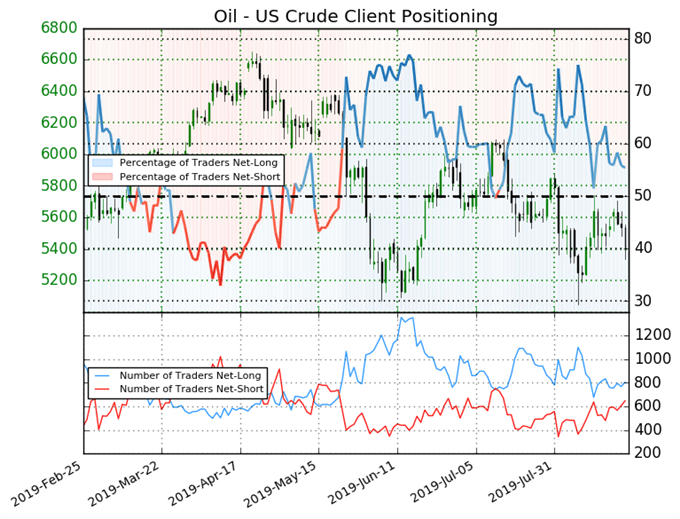 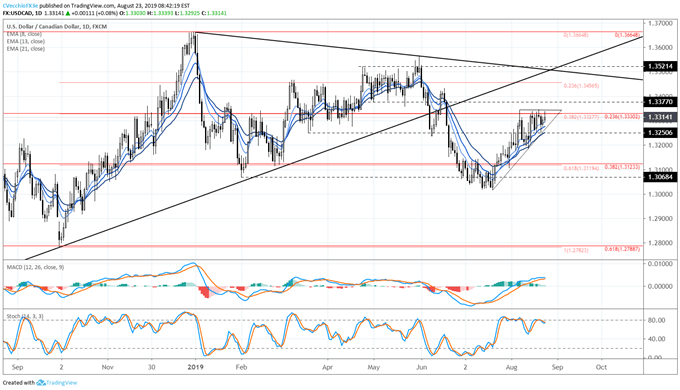 USDCAD prices continue to coil in a symmetrical triangle, as they have over the course of the month of August. Despite a breakdown in short-term correlations, the path of least resistance for USD/CAD remains higher if crude oil prices are going to struggle further. Price continues to linger below resistance near the 23.6% retracement from the September to December 2018 high/low range as well as the 38.2% retracement of the 2018 high/low range around 1.3225/30.

With USD/CAD continuing to trade above the daily 8-, 13-, and 21-EMA envelope, daily MACD continuing to rise in bullish territory and Slow Stochastics holding near overbought territory, the path of least resistance remains to the topside. 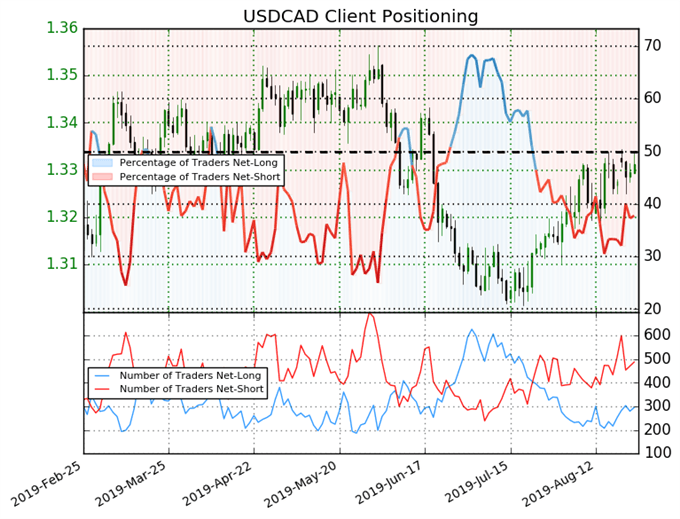