With the US-China trade war in a temporary state of détente – the United States’ 10% tariffs on $300 billion imported Chinese goods set for September 1 has been delayed until December 15 – global financial markets have seen violent price swings; crude oil prices are no different.

Oil Inventory Data Does No Favors for Crude Oil

Compounding global growth concerns was the release of the US Energy Information Administration’s weekly energy inventory update. Crude oil inventories rose by 1.58 million barrels against an expected drawdown of -2.2 million barrels. Oversupply concerns are nothing new, but in context of geopolitical tensions surrounding Iran and the Strait of Hormuz, the clear lack of demand for energy consumption by the world’s largest economy is doing no favors in an already-dour environment. 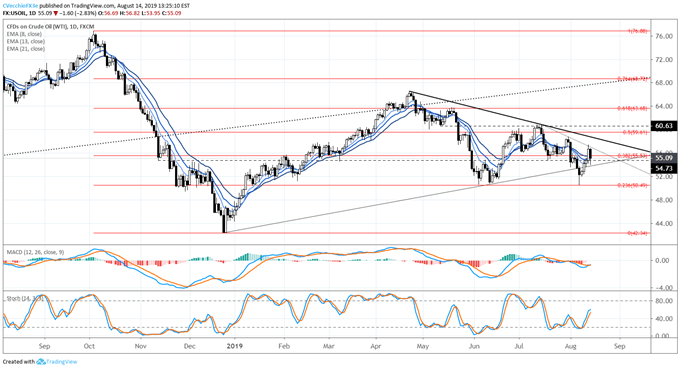 After failing to do so last week, crude oil prices are once again looking at an attempt to breakdown out of a multi-month symmetrical. Last week crude oil prices broke the trendline from the December 2018 and June 2019 lows before finding support around the June 2019 swing lows and the 23.6% retracement of the 2018 high/low range near 50.49.

The attempt to get back into the symmetrical triangle may ultimately prove a failure; if so, more downside may arrive quickly. Price is moving back below the daily 8-, 13-, and 21-EMA envelope. During the rebound, daily MACD never climbed back above the signal line into bullish territory. Slow Stochastics have rebounded out of oversold territory but are barely back to neutral. 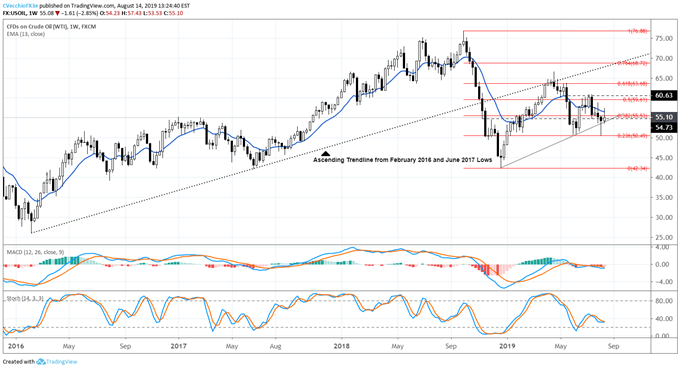 It’s important to keep a long-term perspective on crude oil prices: a look at the crude oil price weekly chart shows how potentially hazardous the technical situation could become over the next few weeks. Despite last week’s bullish hammer, this week is producing an inverted hammer. With daily MACD and Slow Stochastics pointing lower in bearish territory, momentum remains to the downside. Ultimately, failure in the symmetrical triangle points to a return to the December 2018 low at 42.34. 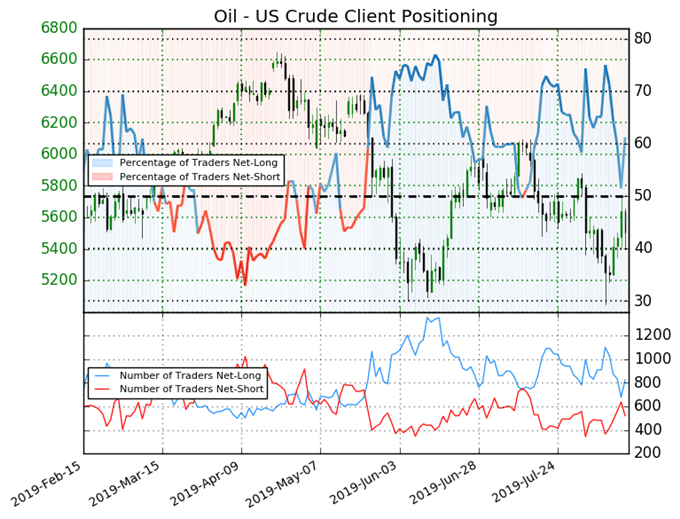 US Dollar as a Proxy for the US-China Trade War

But this relationship seems tentative at best. If global growth concerns are truly here, it would stand to reason that the US Dollar would resume its role as the world’s reserve currency, and attract significant capital inflows. This theme would trump other currencies’ relationships, including strong ties between energy-sensitive currencies (like the Canadian Dollar) and energy markets themselves. 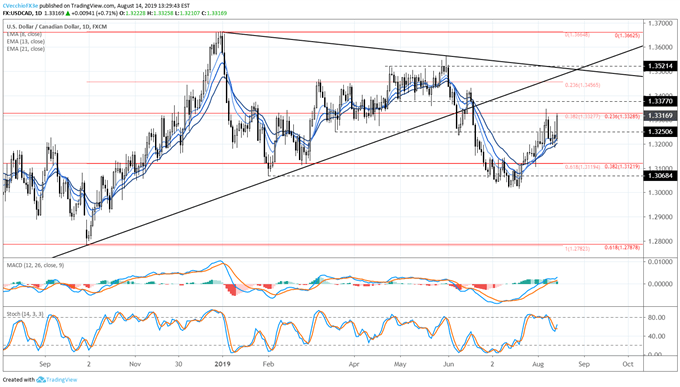 The path of least resistance for USD/CAD remains higher if crude oil prices are going to struggle further. Price has climbed back towards last week’s resistance near the 23.6% retracement from the September to December 2018 high/low range as well as the 38.2% retracement of the 2018 high/low range around 1.3225/30. With USD/CAD continuing to trade above the daily 8-, 13-, and 21-EMA envelope, daily MACD having risen above its signal line in bullish territory, and Slow Stochastics issuing a buy signal above the neutral line, it appears that the next leg higher for USDCAD is around the corner.