The last week of July and the first few days of August have proved to be monumentally important for the US Dollar (via the DXY Index). As the Federal Reserve opted to only cut rates by 25-bps at their July policy meeting, US President Donald Trump, who has repeatedly called for looser interest rates, has now cultivated a situation where the Fed’s hand may be forced.

Indeed, with the US delegation canceling trade negotiations with their Chinese counterparts on Wednesday and the surprise announcement for another 10% tariff on $300 billion of imported goods on Thursday, market participants now see the US-China trade war as getting worse before it gets better.

In turn, while the US Dollar initially benefited by a less dovish Fed than some market participants were expecting, the developments in recent days have convinced traders that the Fed will continue down the dovish policy path for the foreseeable future.

For the past several weeks, we’ve said some variation of, “Regardless, markets feel that if the Fed rate cut cycle is about to begin, it will do so in aggressive fashion over the next several months in direct response to the US-China trade war.” Following the latest round of Trump tariffs, Fed rate cut odds are once again frontloaded. 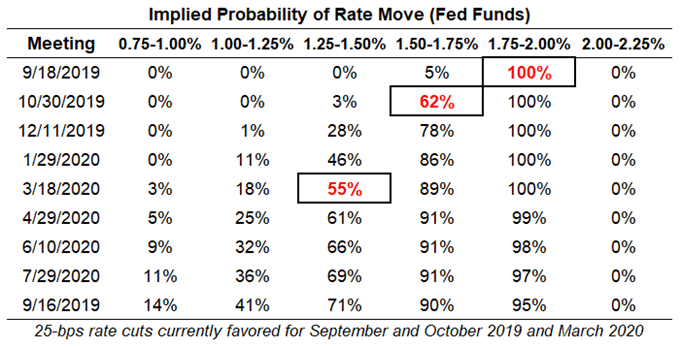 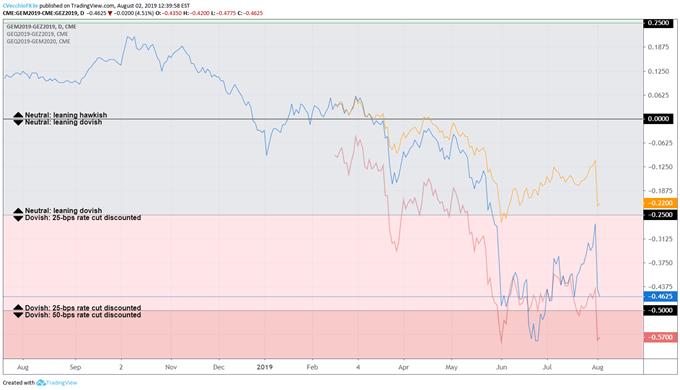 Overall, Fed funds remain more aggressive than Eurodollar contracts in their dovish pricing for the Fed rate cut cycle. We’ve previously noted that “such dissonance [between Fed funds and Eurodollars] typically yields volatility,” and this week has proven no different. Expected elevated levels of volatility across USD-pairs moving forward. 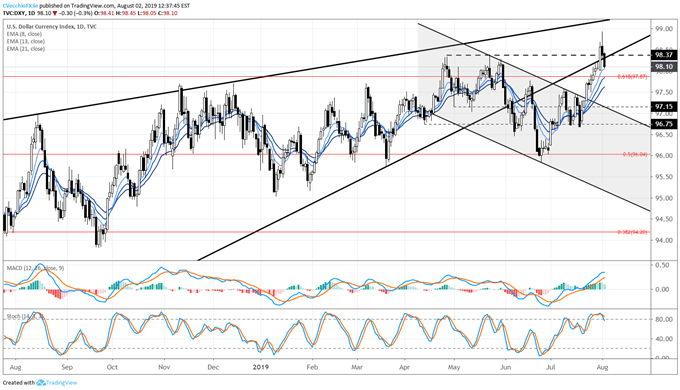 Fed rate cut odds have jumped since the July Fed meeting, no thanks to the July US nonfarm payroll report but rather the introduction of a fresh round of Trump tariffs in the US-China trade war. In turn, he US Dollar (via the DXY Index) is now threatening a false breakout.

A false breakout here would occur at critical resistance in the form of (1) former trendline support from the February 2018 and March 2019 lows and (2) the bearish daily key reversal bar set at the former yearly high at 98.37. A close at current levels or below would mark such an occasion.

To this end, if the DXY Index were to close below the daily 8-EMA, which it hasn’t done so since July 19, there would be more credible evidence to believe that the near-term rally is finished.