As we pass through the ides of July, the US Dollar is attempting to stage a more substantive recovery. After several weeks of price action burdened by the prospect of the beginning of the Federal Reserve’s interest rate cut cycle, a string of better than expected US economic data has come into conflict with overtly dovish commentary from Fed Chair Jerome Powell (among other FOMC policymakers).

The better than expected June US advance retail sales report released earlier today, much like the June US nonfarm payrolls report, suggest that the US economy isn’t facing an imminent threat of recession (despite longer-term US recession odds rising in recent weeks).

Fed Funds Back Away from Three Rate Cuts

Following the June US advance retail sales report, concerns about an immediate slowdown to the US economy have faded. The Atlanta Fed GDPNow Q2’19 growth tracker was predicting 1.4% annualized growth prior to today’s data releases; it is likely that this reading is pushed closer to 2% annualized when the update is released later. 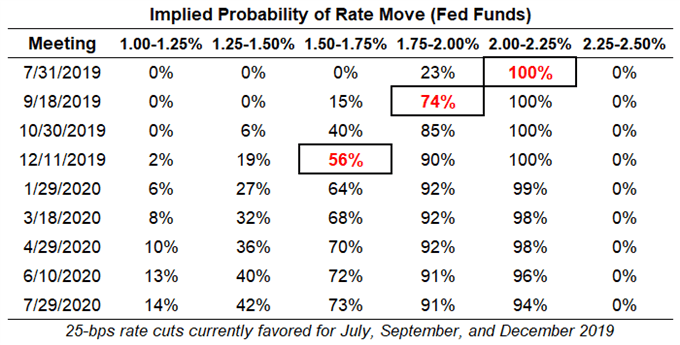 Mirroring the contraction in Fed rate cut odds as derived from Fed funds futures, Eurodollar contracts are backing away from three rate cuts as well. We can measure whether a rate cut is being priced-in by examining the difference in borrowing costs for commercial banks over a specific time horizon in the future. The chart below showcases the difference in borrowing costs – the spreads – for the June 19/December 19 (orange) and June 19/June 20 (blue) periods in order to gauge where interest rates are headed by the end of December 2019 and the end of June 2020, respectively. 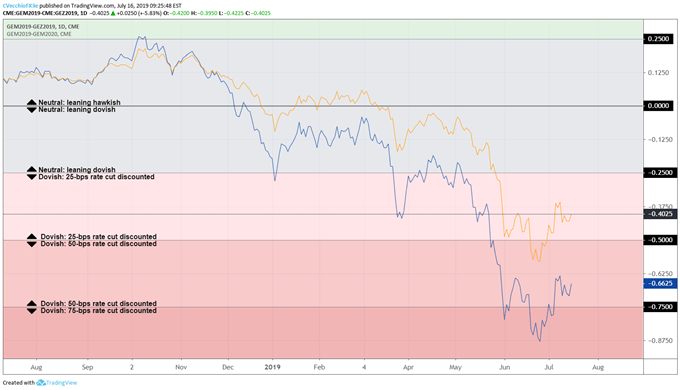 Eurodollar contract spreads are discounting less two 25-bps rate cuts by December 2019 and under three 25-bps rate cut by June 2020; there are -40-bps discounted through December 2019 and -66-bps discounted through June 2020. The continued pullback in Fed rate cut odds since bottoming out at the end of June has undergirded the rebound in the US Dollar (via the DXY Index) over the past three weeks.

Like a broken record, it bears repeating an observation from a month ago. Traders need to understand the manner in which interest rate markets are discounting the Fed rate cut cycle at present time: the rate cuts are extremely frontloaded. In other words, market participants feel that if Fed rate cuts are coming, they’re going to come quickly over the next several months, a direct response to the growing threat of the US-China trade war. It thus stands to reason that if a US-China trade deal materializes at any point in time, there will be a sharp reduction in Fed rate cut odds.

Fed Chair Powell will be speaking later today at 13 EDT/17 GMT, making it highly likely that interest rate markets will be on the move – as will the US Dollar (via the DXY Index). 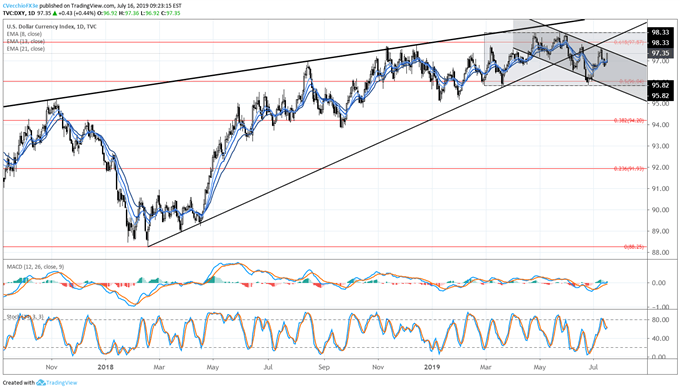 As Fed rate cut odds ease off, the US Dollar (via the DXY Index) has been able to rebound back to resistance in the downward sloping channel (near 97.40 today) in place since May. Bullish momentum appears to be building, with price holding above the daily 8-, 13-, and 21-EMA envelope. Meanwhile, daily MACD is attempting to extend its advance above the signal line separating bullish from bearish territory. The US Dollar’s near-term bias remains neutral until more technical clarity is achieved. Even a break of the downward sloping channel would retrain focus on the sideways range in place since the end of February between 95.82 and 98.33.