- The US Dollar has been dragged lower by skyrocketing Fed rate cut odds: markets are now pricing in a 97% chance of two 25-bps rate cut in 2019 and a 75% chance of three rate cuts this year.

- US-China trade war will be in focus all week in the runup to the G20 summit in Osaka, Japan.

- The IG Client Sentiment Indexshows that retail traders are buying the US Dollar during its declines.

The US Dollar (via the DXY Index) continues to reel in the wake of the June Fed meeting. With the US-China trade war squarely in focus this week in the runup to the G20 summit in Osaka, Japan, where US President Donald Trump and Chinese President Xi Jinping will meet. Attempting to hash out an agreement between the two world’s largest economies won’t be an easy task, and the bar is set extremely low in terms of what is expected to come out of the weekend’s G20 summit.

If the likelihood of an agreement to end the US-China trade war is low, then it would stand to reason that the odds of more accommodative Federal Reserve policy should be high. Indeed, per Fed fund futures contracts, the limited prospect of a détente this weekend has provoked rates markets into dragging forward rate cut expectations rapidly: 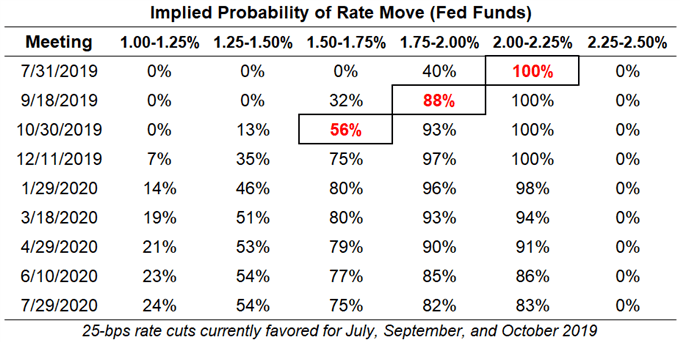 Recall that at their peak following the March Fed meeting, rates markets were pricing in a 58% chance of a 25-bps rate cut in September; now, odds of a September cut are 100%. There is now an 88% chance of a second cut by September, and a 56% chance of a third cut by October. Overall this year, there’s a 100% chance for one rate cut, a 97% chance for two rate cuts, and a 75% chance for three rate cuts.

US Trade Balance Due Up, Could Sour Tone Ahead of G20

In the week after the June FOMC meeting and in the runup to the G20 summit in Osaka, Japan, there are two US data releases in which traders should give attention. On Wednesday, delayed US trade figures will show that the US has its largest trade deficit ever, a figure surely to draw the ire of US President Donald Trump and his administration’s trade representatives. As such, it seems likely that expectations for any sort of substantive agreement between the US and China this coming weekend are very low.

The second report would be the final Q1'19 US GDP report. Due in at 3.1% annualized from 3.2%, the growth figure will likely be overlooked if not dismissed outright by market participants given the current posture of Fed policy.

US Inflation Expectations Have Weakened Significantly in Recent Months (Chart 1) 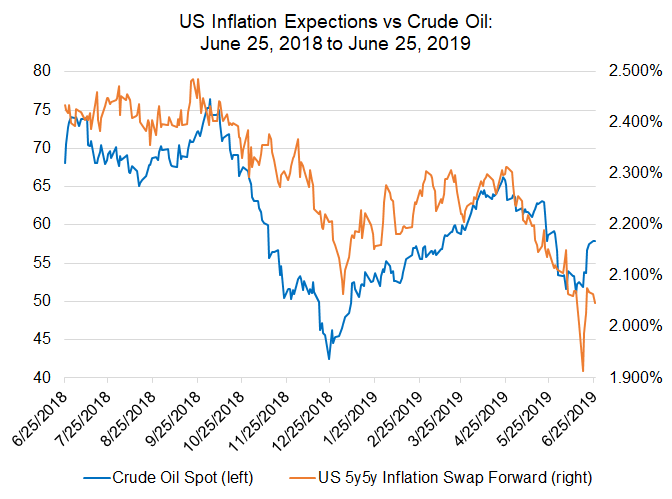 If recent US Dollar weakness has hinged on rising Fed interest rate cut odds, then those cut odds have been hinging on the idea that the US-China trade war poses a materially negative threat to the US economy, and that those risks are going to be realized very shortly. The depression of growth and inflation expectations can be measured by the 5y5y inflation swap forwards, which have dropped by nearly -30-bps from their high in April to 2.047% today.

Even though the market measure of inflation is around the Federal Reserve’s medium-term target of 2%, that US inflation expectations have tumbled will likely keep concern elevated among policymakers in the runup to the July Fed meeting. 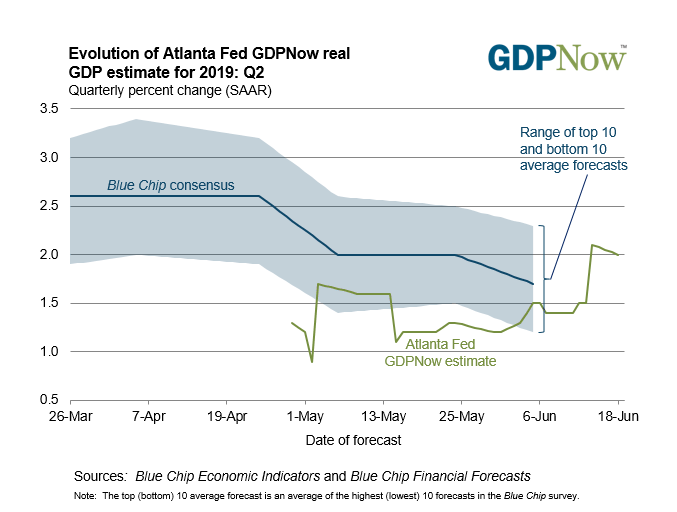 Based on the data received thus far about Q2’19, the Atlanta Fed GDPNow forecast is looking for growth at 2%. The next update to the Q4’18 forecast will be released after Wednesday’s US durable goods orders report. Overall, US economic data momentum has been on a downward path over the past several weeks, with the Citi Economic Surprise Index for the US down to -68.1 on June 25 from -40.1 on May 24. 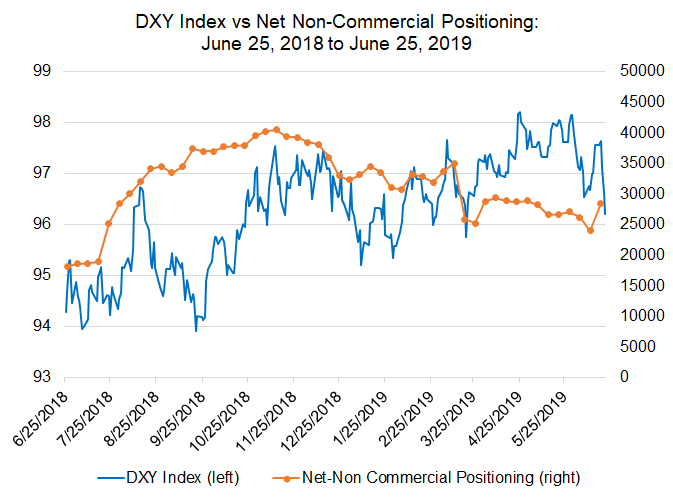 Looking at positioning, according to the CFTC’s COT for the week ended June 18, speculators increased their net-long US Dollar positions to 28.5K contracts, up from the 24K net-long contracts held in the week prior. But these data are outdated: the most recent COT’s reporting period did not cover the June Fed meeting, which occurred on June 19; there will likely be a significant drop in net-long US Dollar positions in the upcoming report. 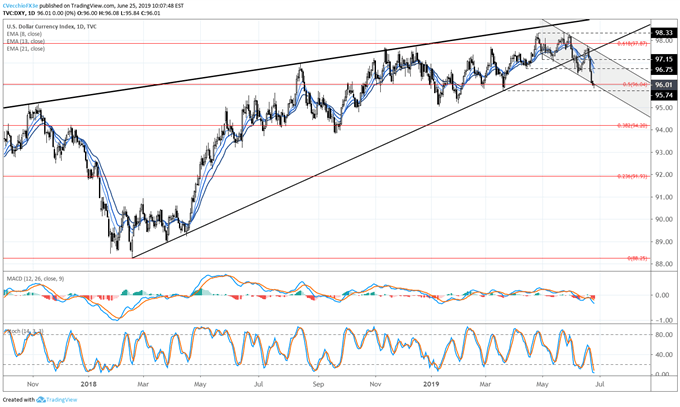 It still holds that with Fed rate cut odds so elevated, the fundamental tenets of a major US Dollar (via the DXY Index) top are still in place. Technically, the bearish rising wedge dating back to the March 2018 lows is still seeing follow through lower, with the DXY Index trading in a descending channel over the past eight weeks.

The momentum profile remains bearish for the US Dollar with the DXY Index below the daily 8-, 13-, and 21-EMA envelope, as well as both daily MACD and Slow Stochastics trending lower in bearish territory. In our last update we said that “losses may extend towards channel support and the 50% retracement of the 2017 high/2018 low range near 96.50 over the coming days.” Having achieved 96.50, attention now turns to the March 2019 swing low at 95.74. Reversal odds increase with a move above the daily 8-EMA (currently at 96.55).