- After softer Canada GDP figures for February, Crude Oil strength may be a prerequisite to see any significant Canadian Dollar strength.

Crude oil prices are trading higher as a result of supply concerns coming out of Venezuela. With a purported military coup underway, it seems possible (if not likely) that there are constraints placed upon the world’s tenth largest oil producer. Such a development may just be what oil prices need to maintain their uptrend from the low seen in 2016. There are implications for USDCAD as well, given that the energy sector accounts for nearly 11% of Canadian GDP.

Crude oil prices have spent the past few weeks lingering around an important technical area, running into the trendline from the February 2016 and May 2017 swing lows – a trendline, once broken in November 2018, that signaled the ‘flush’ in markets. Accordingly, a break in oil prices around 64 could be a trend defining move for the coming months. 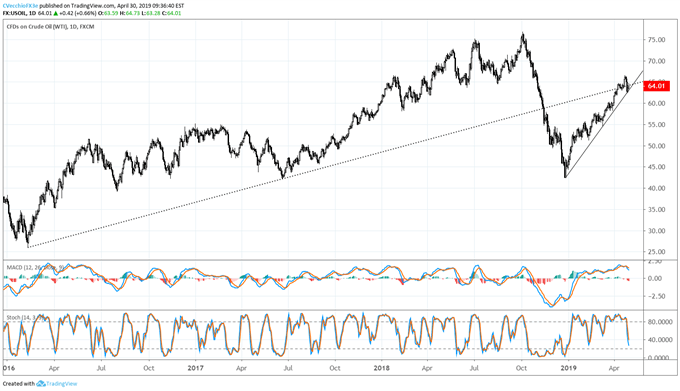 Failure to continue the rally here would suggest that oversupply concerns may be becoming more prominent on traders’ minds now that the June OPEC cut expiry is around the corner; or success rallying here would indicate that near-term concerns about tightening supply due to sanctions on Iran or a military coup in Venezuela are driving sentiment.

Regardless, traders should fully anticipate a tug-and-pull in the newswires over the coming weeks; volatility in oil should stay elevated. 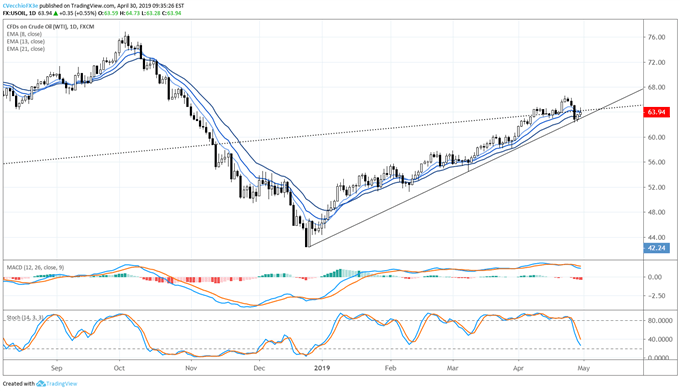 In the very near-term, even as oil price battles with their former trendline support (now resistance), it’s still holds that the predominant trend direction remains pointed to the topside. Even as price is enmeshed in the daily 8-, 13-, and 21-EMA envelope, the uptrend from the late-December 2018 and March 2019 swing lows remains intact, with the most recent tests coming on April 26 and 29.

But failure to rally here could prove to be a technical death knell for oil prices: a move below last week’s low at 62.26 would constitute several key breaks, including: the daily 21-EMA; the uptrend from the December 2018 low; and decisive rejection from the trendline from the February 2016 low. Either way, we’re at a key inflection point in the oil market. 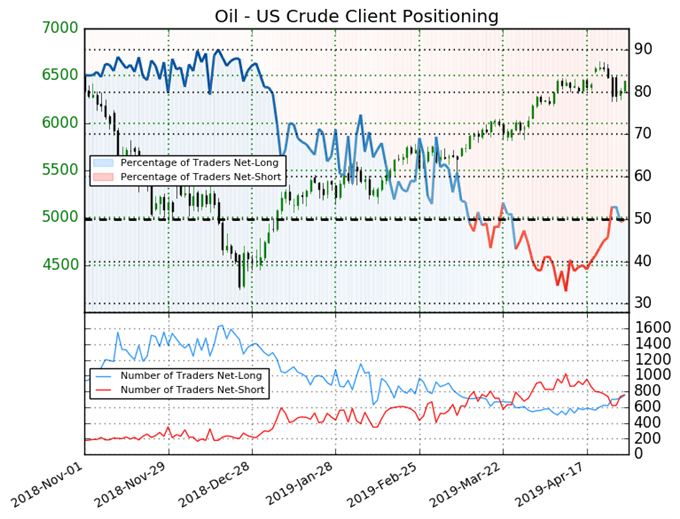 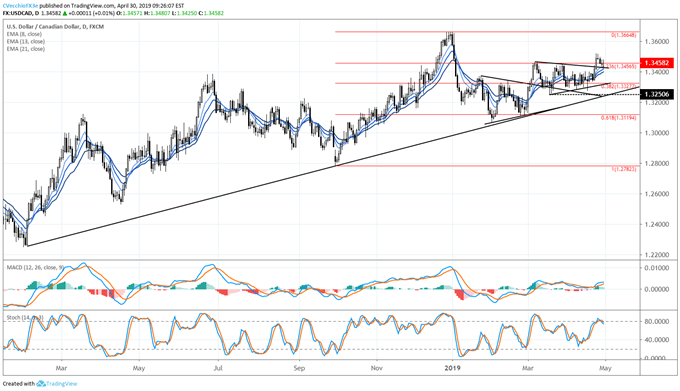 USDCAD prices have seen little follow-through following the bullish breakout from the symmetrical triangle last week. The April BOC meeting catalyzed the move higher, and even as the DXY Index has moved to fresh yearly highs, USDCAD has yet to push to a fresh high post-BOC. Even today, after a mostly disappointing Canada GDP report for February, USDCAD has yet to see any meaningful traction higher.

As noted in the February Canada GDP preview, it shouldn’t be a surprise that we saw a weaker growth reading; after all, Eurozone PMIs bottomed out in February; and Q1’19 US GDP expectations bottomed out in late-February/early-March. Soft growth midway through Q1’19 wasn’t just an issue for Canada, but rather, most of the developed world. 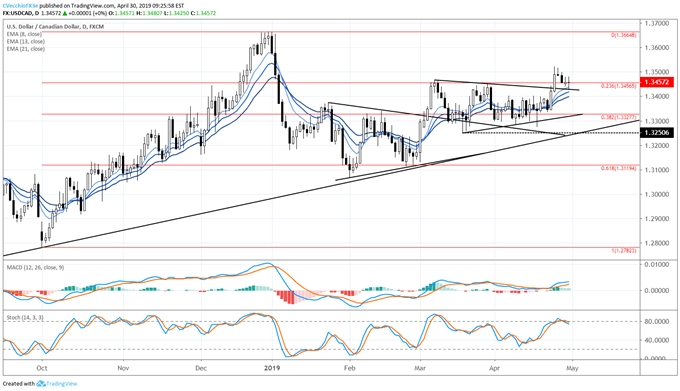 That said, even as USDCAD price struggles to run higher, it’s far too soon to say that the bullish breakout attempt is a failure; traders may simply be digesting the move before loading back up for another swing higher. The daily 8-EMA coincides with the symmetrical triangle’s original resistance now turned support around 1.3430; if the bullish breakout attempt is valid, then this level should hold. Failure below 1.3430 would increase the odds of a reversal within the triangle itself back towards original support around 1.3330 (near the 38.2% retracement of the Q4’18 low to Q4’19 high range at 1.3327). 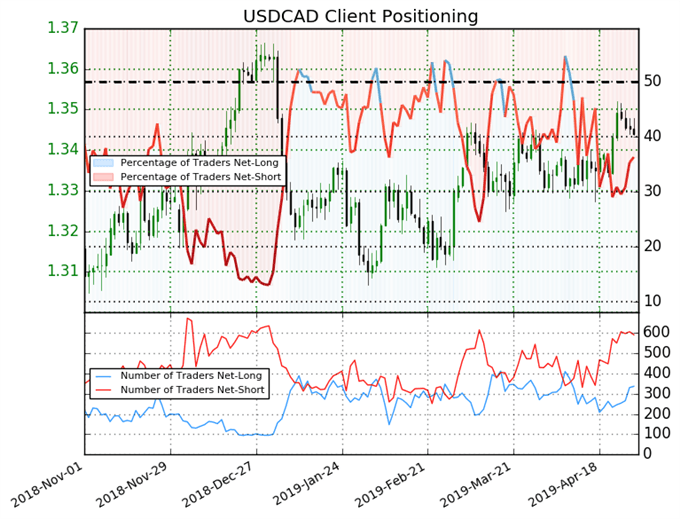