- Reuters reports that several ECB policymakers feel that the recent growth forecasts are too optimistic, raising the question: is more stimulus coming later this year?

- Battle lines are being drawn up in the EU-US trade dispute as US President Trump insists that agricultural issues are included – while the EU’s negotiating directives have explicitly said otherwise.

- Retail traders are buying EURUSD now, bringing into question the viability of the recent move higher.

The US Dollar (via the DXY Index) has moved little at the start of the week, with fatigue setting in following several tense weeks around the latest Brexit negotiations. While the economic calendar picks up in the coming 24-hours with several key data releases due from overseas, traders’ attention this morning is on the batch of headlines coming out of the Eurozone.

With the US-China trade war seemingly winding down, US President Donald Trump is readying to open up trade disputes on two other fronts: the European Union and Japan. While the latter has said that it will only make changes to its trade policy under the auspices of the Trans Pacific Partnership (TPP), which the US left, the former appears ready to go toe-to-toe with the United States.

To this end, now that the WTO has ruled that European Union subsidies to Airbus (a French company) have left Boeing (an American company) at a disadvantage, US President Trump has threated nearly $11 billion in tariffs on imported goods from Europe. The EU has in turn threatened to respond in kind with tariffs on food and motorcycles. After the EU outlined trade directives yesterday that explicitly stipulated agriculture must be excluded from upcoming negotiations, US President Trump said today that agriculture must be looked at; a new tit-for-tat trade war appears to be taking shape.

Reuters is reporting that a “significant minority” of ECB policymakers have "expressed doubt that a long projected growth recovery is coming in the second half of the year and some even questioned the accuracy of the ECB’s projection models, given their long history of downward revisions."

In other words, several ECB policymakers are concerned that ECB President Mario Draghi is too optimistic as he prepares for his exit in October 2019. We’ve previously commented that there may be a tone of optimism underpinning the ECB’s forecasts so that Draghi can declare a measure of ‘victory’ as he ends his term; perhaps this sentiment is being felt within the ranks of the Governing Council itself. A policy misstep in July 2011 by outgoing ECB President Jean-Claude Trichet accelerated the Eurozone debt crisis; what will come of an egotistical mistake this time around? 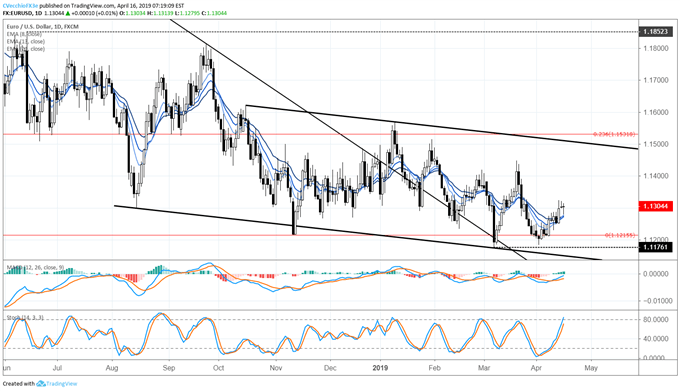 EURUSD prices have continued to show improvement throughout April, although the past two days of price action have showed limited upside. Momentum has started to shift higher as well, as evidenced by the sharp acceleration in Slow Stochastics to overbought territory in recent days. But other gauges of momentum aren’t so optimistic yet: daily MACD is trending higher, but still in bearish territory; and the daily 8-, 13-, 21-EMA envelope is not in sequential order. Upside is still possible, but the foundation is still soft. 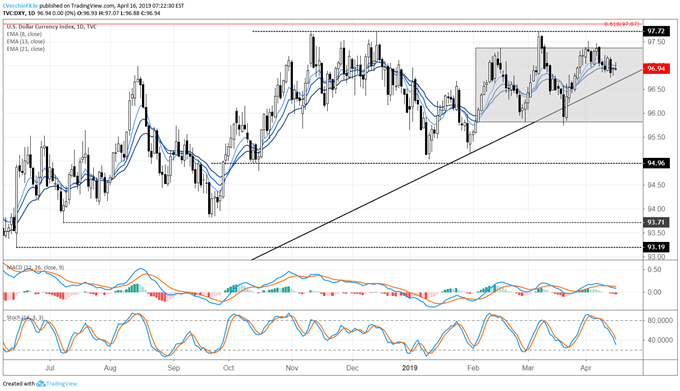 Momentum remains weak for the DXY Index, mirroring the budding strength in EURUSD. As such, there still is potential for more downside – price is below its daily 8-, 13-, and 21-EMA envelope while both daily MACD and Slow Stochastics have turned lower (the former is in bullish territory still, while the latter is now in bearish territory). Better opportunities still exist in the JPY-crosses (like AUDJPY and EURJPY) in the immediate near-term.