- Crude Oil prices have held onto their recent gains at the start of the week, even if prices haven’t moved all that much.

- Upcoming US inventory data should help provide more clarity for markets that have been dealing with concerns over supply.

Crude Oil prices are off to a slow start this week, mirroring the relatively calm market conditions seen elsewhere. With repositioning taking place ahead of the Easter holiday, market participants are finding themselves at ease over old concerns – mainly that Brexit has been punted to October and that the US-China trade war talks are approaching the endgame.

But the backdrop for Crude Oil prices remains supportive. Despite concerns over growth lingering in Europe, strong Q1’19 US growth expectations have shaken off any Fed-induced concerns about an immediate slowdown hitting the world’s largest economy. Coupled with signs that more sanctions are coming down the pipeline for Iran and Venezuela, and now increased fighting in Libya, there are several pieces of evidence to suggest that the supply picture will remain constrained over the next several weeks.

In the near-term, it is worth cautioning that, given commentary from Russian Finance Minister Anton Siluanov that the country may no longer participate in the OPEC production cuts past June, concerns about excess supply may perk up and limit Crude Oil’s advance. Traders will get a more complete picture over the supply picture in the next 24-hours when the weekly API inventory data are released this afternoon at 16:30 EDT/20:30 GMT and the weekly DOE inventories are released tomorrow at 14 EDT/18 GMT. 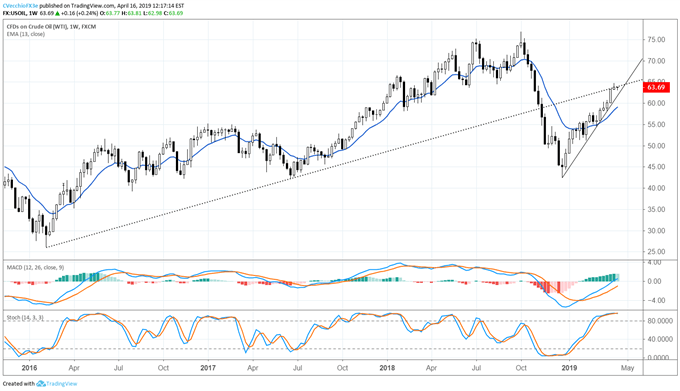 Crude Oil prices have paused at an important technical area this week, running into the trendline from the February 2016 and May 2017 swing lows – a level once broken in November 2018 signaled the ‘flush out’ of longs in the market. In a sense, then, this could be a trend defining area for the coming months: failure to continue the rally here would suggest that overarching supply concerns may be becoming more prominent on traders’ minds now that the June OPEC cut expiry is around the corner. 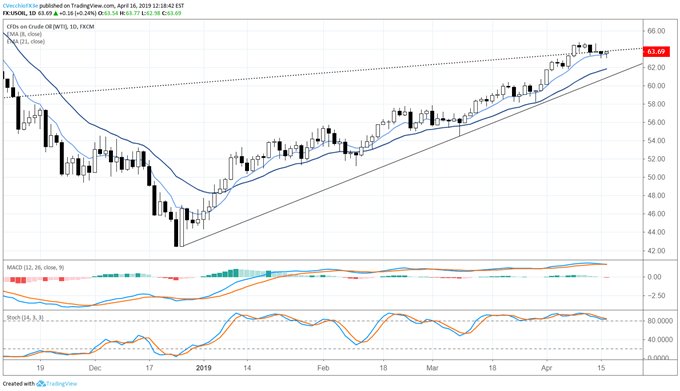 In the very near-term, even as Crude Oil prices battle with their former trendline support (now resistance), it’s clear that the general trend direction remains pointed to the topside. Price has been well-supported by both its daily 8- and 21-EMAs, having closed above the former every session since March 11 and the latter every session since February 12. To this end, Slow Stochastics have been in bullish territory since January 12. 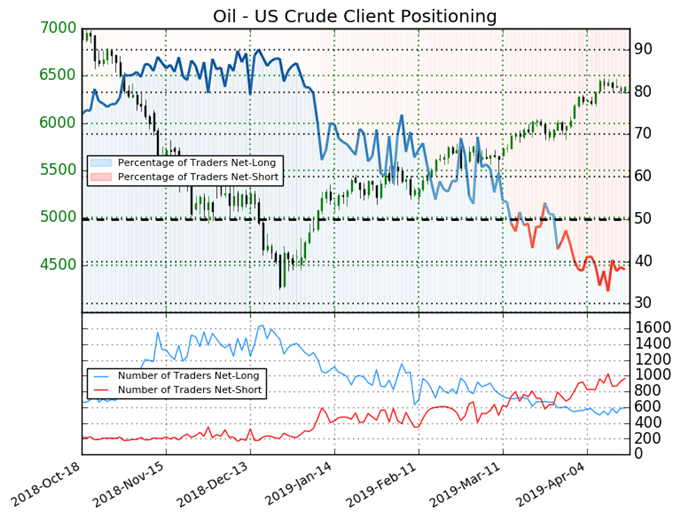 Oil - US Crude: Retail trader data shows 38.1% of traders are net-long with the ratio of traders short to long at 1.63 to 1. In fact, traders have remained net-short since Mar 28 when Oil - US Crude traded near 6001.8; price has moved 6.4% higher since then. The number of traders net-long is 4.1% lower than yesterday and 13.0% higher from last week, while the number of traders net-short is 8.1% higher than yesterday and 0.8% lower from last week.