- Two of the biggest concerns for traders in recent months have seemingly disappeared: the US-China trade talks are nearing resolution; and the Brexit deadline has been pushed back until October 31.

- Against a backdrop of central banks proving increasingly dovish, the near-term environment for risk appetite has improved significantly in the past few days.

- Retail traders are buying Yen weakness despite breakouts transpiring in AUDJPY and EURJPY.

The US Dollar (via the DXY Index) is not enjoying the latest bout of increased risk appetite sweeping across global asset classes. With the Japanese Yen and Swiss Franc struggling as well, it’s clear that FX markets are dumping the traditional safe havens in favor of the higher yielding, high beta currencies. Traders need not look any further than the latest news headlines to understand why.

The big market impact from the Brexit deadline being kicked down the road to October 31, 2019 is that traders are no longer pricing in the possibility of significant market moves over the coming months. Various measures of implied volatility have collapsed across the GBP-crosses, with overnight and 1-week implied vols sinking to yearly lows.

But the starkest change in market behavior is seen in the GBPUSD 1-month implied vol, which has sunk back to its lowest level since January 2018. With the Easter holiday week forthcoming, UK parliament isn’t in session, and therefore, traders should be expecting very little progress, if any news comes out at all, regarding the cross-party talks between UK Prime Minister Theresa May and Labour party leader Jeremy Corbyn.

It’s not just the latest Brexit headlines that are helping lift investors’ spirits. Commentary from both American and Chinese officials in recent days suggest that a trade agreement may be nearing completion. Although there are still several outstanding issues in play, mainly forced intellectual property transfers from foreign companies to the Chinese government and a viable enforcement mechanism for compliance, it appears that the Trump administration may be willing to punt on these issues until 2025 – when the next administration would have to deal with it (assuming that Trump wins a second term).

The fact of the matter that both of the big thematic issues that have plagued markets for many months now may be moving off the radar, either indefinitely or for at least an amount of time that will push concerns to the back of traders’ minds. Such developments have proven to be not only good news for global equities, but for higher yielding, high beta currencies as well. 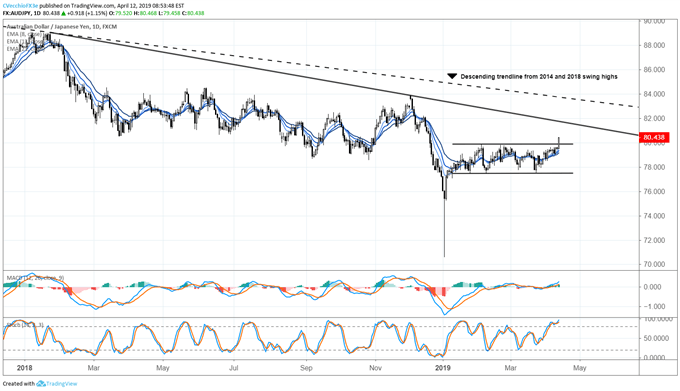 After consolidating in a sideways pattern since early-January – indeed, right after the Yen flash-crash – AUDJPY prices may finally be breaking to the topside. The range between 77.50 and 79.85 could be giving way to a potential measured move up to 82.20 over the coming weeks. Still, AUDJPY bulls may have to contend with the descending trendline from the 2018 swing highs beforehand, which come in closer to 81.65/90 over the coming week. 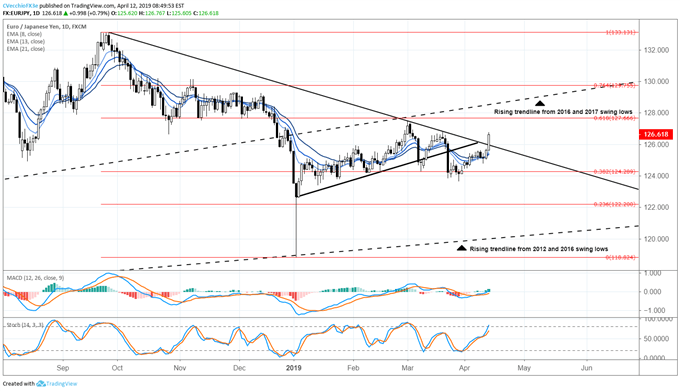 EURJPY has had quite a few choppy days of price action, but resolution appears to be emerging for a topside breakout. Having cleared out the downtrend from the September 2018 and March 2019 swing highs, EURJPY is well-established above its daily 8-, 13-, and 21-EMA envelope now. Likewise, both daily MACD and Slow Stochastics have turned higher. The path of least resistance may be back towards the 61.8% retracement of the 2018 to 2019 high/low range at 127.67; the March high comes in slightly earlier at 127.50. More downside is emerging for the DXY Index despite basing attempts on Wednesday and Thursday. The move to fresh weekly and monthly lows comes as the bearish evening star candle cluster established last week around the two-month range highs has proved to be a valid topping signal.

At present time momentum is continuing to shift to the downside – price is below its daily 8-, 13-, and 21-EMA envelope while both daily MACD and Slow Stochastics have turned lower (albeit in bullish territory still). The lack of clear technical indicate that traders may want to stay sidelined in the DXY Index and look for better opportunities in the JPY-crosses (like AUDJPY and EURJPY) over the coming days.