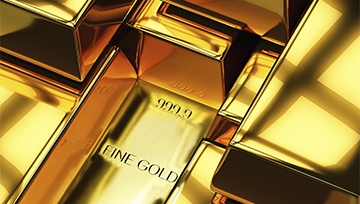 US Dollar Gains as US Inflation Beats, ECB Undercuts Euro on Rates

- US Dollar gains on the day have little to do with US economic data: inflation beat expectations, but wages missed. Declining real wages are a negative development for a consumer-based US economy.

- The ECB’s Governing Council seemingly ruled out a rate cut in 2019, even though President Mario Draghi emphasized that “all instruments” were on the table.

- Retail traders are decidedly neutral on EURUSD and EURJPY after the ECB meeting today.

The US Dollar (via the DXY Index) is seeing gains build at the start of “Super Wednesday.” Traders have already had to grapple with the UK GDP release while they await headlines regarding the EU-UK emergency Brexit summit. But the source of gains for the DXY Index rally may draw into question whether or not today’s gains are based on positive developments for the US economy.

Inflation is rebounding in the United States, but the overall picture isn’t terrific. Headline CPI came in at 1.9% versus 1.8% expected, from +1.5%, while Core CPI was on hold at 2.1% (y/y). Rebounding price pressures may be welcomed by the Federal Reserve, who at their March meeting eliminated the prospect of a rate hike this year. But with wage growth figures disappointing, there’s evidence that real wages are shrinking in the US – a poor development for a consumer-based economy. 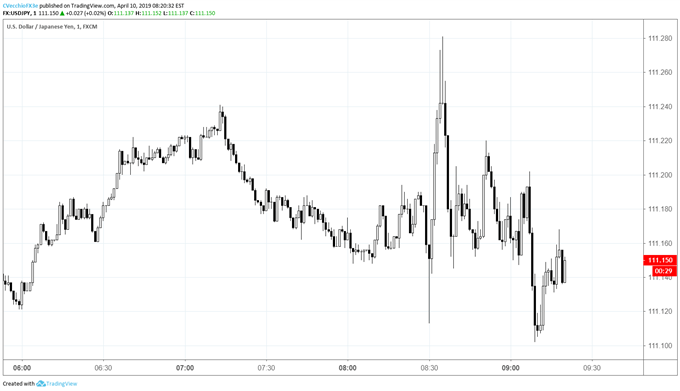 The US Dollar reaction around the March US CPI report was limited, particularly when viewed through the lens of a pair other than EURUSD, which was grappling with ECB President Mario Draghi’s press conference. USDJPY, for example, was barely moved around the data releases, and was trading relatively lower at the time this note was written (111.16 pre-releases; 111.15 post-releases). It’s not a far cry to suggest that US Dollar gains on the day are purely driven by the ECB.

The April ECB meeting has come and gone without any formal action by policymakers, but that doesn’t mean that FX markets didn’t prove active. The baseline assessment by the Governing Council that interest rates wouldn’t move again this year was seemingly a hawkish development, only to be undercut by ECB President Draghi emphatically saying that “all instruments” were on the table should conditions warrant them.

And will economic conditions warrant the ECB reaching into its toolbox to find any and “all instruments” at its disposal? From the ECB’s own words, “downside risks are increasing.” Markets seems to think so: odds of a deposit rate cut by the end of the year have increased from 15.7% to 22%. 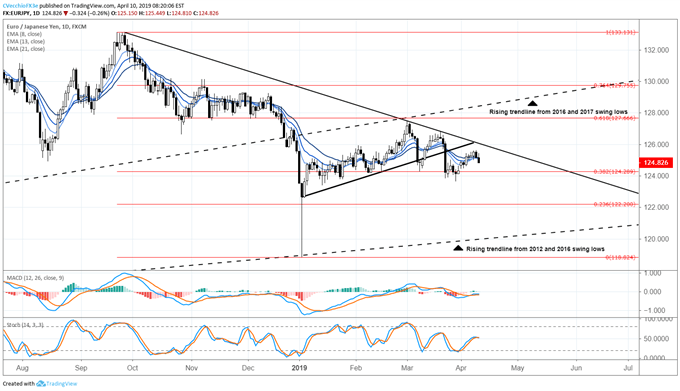 EURJPY's progress at the start of April had been stunted in the run up to the April ECB meeting. After, price is falling below the daily 8-, 13-, and 21-EMA envelope. As a result of sideways trading at the start of the week, price remains in the downtrend from the September 2018 and March 2019 highs. Both daily MACD and Slow Stochastics have returned back to neutral positioning since last week. Another test of the descending trendline near 126.000 may be out of the question now that EURJPY’s momentum is starting to shift to the downside. 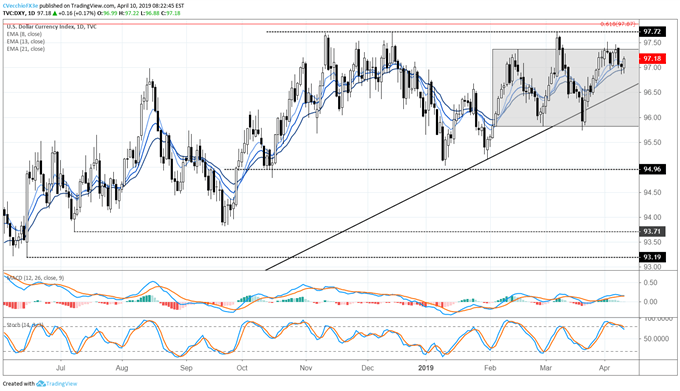 Price has ‘caught’ at the daily 21-EMA and started to turn higher with a bullish piercing candle today, following with the hammer/doji yesterday. The lack of follow through after the bearish evening star candle cluster would suggest that bulls have not yet relinquished control; however, it’s far too early to make any kind of decisions “Super Wednesday” still under way and the March Fed meeting minutes due out later today.