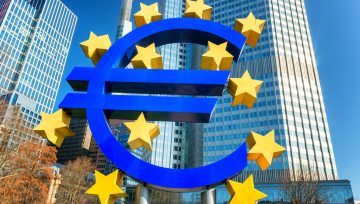 - Talks of an imminent US recession have disappeared as the US Treasury yield curve has moved away from inversion territory.

- The April ECB meeting on Wednesday is giving traders a reason to lift Euro prices ahead of time.

- Retail traders are starting to change their tune on the US Dollar, and in turn, EURUSD may rally.

The US Dollar (via the DXY Index) is seeing more weakness in the run up to the supersaturated economic calendar on Wednesday, despite the fact that Tuesday’s slate of events is essentially blank (JOLTS jobs report is interesting for economists, not so much for traders). Brexit negotiations are on hold as leaders get set to gather for the emergency summit tomorrow.

Elsewhere, the US-China trade war talks have simmered, particularly as the Trump administration grapples with how to properly enforce the agreement in China. But a new front may be opening up with the EU over Airbus and Boeing – this may prove to be a new issue traders are forced to deal with in the news moving forward.

US Recession Concerns Have Quieted Down

As the US Dollar has weakened in recent days, it’s worth noting that little of it has to do with concerns about the US economy slipping into recession. Much ado about nothing, it seems: all of the sirens about the US Treasury yield curve inverting have seemingly disappeared. It’s worth noting that long-end US Treasury yields have rebounded in recent days, as seen by the 10-year yield below: 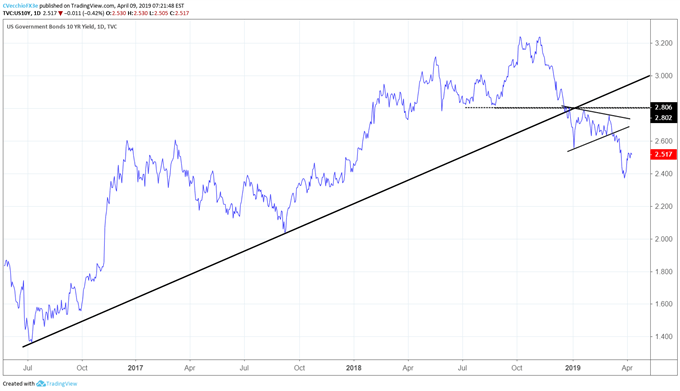 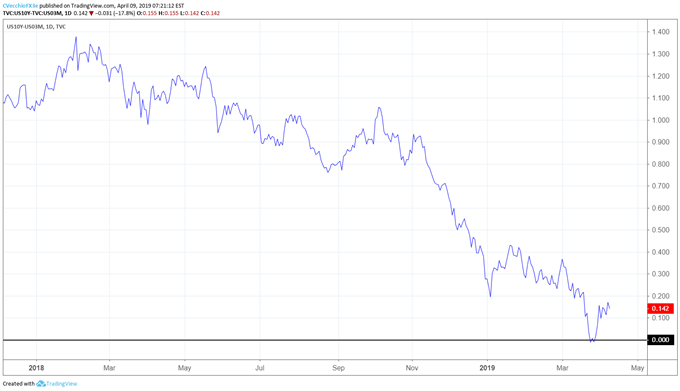 It’s worth reiterating again, as we outlined in the Why Does the US Yield Curve Inversion Matter? note, that the yield curve must stay inverted for two consecutive quarters before becoming a valid recessionary signal; we didn’t even have two consecutive days in the 3m10s spread below zero. Any suggestions that the US Dollar is being pressured by near-term recession fears are disingenuous. 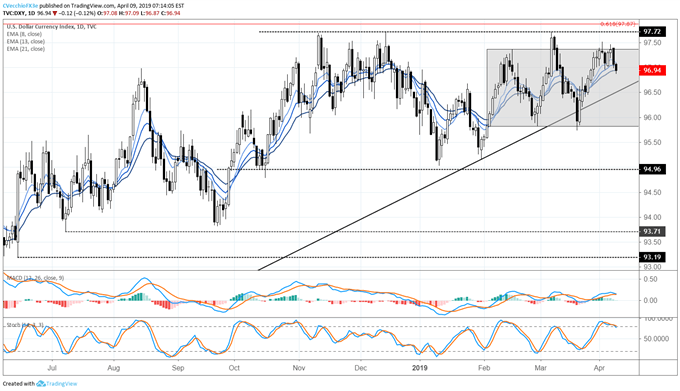 Following failure to clear 97.37 to the topside last week, the bearish evening star candle cluster identified yesterday appears to have taken shape. The topping pattern points to more weakness for the US Dollar in the near-term; the DXY Index has already started to undercut the daily 8-, 13-, and 21-EMA envelope. Given that the two-month range remains in place, a reversal back to range lows would call for a move closer to 95.80 over the coming days/weeks.

The economic calendar is rather quiet today, but it is supersaturated with ‘high’ rated events tomorrow, so much so that many analysts have dubbed it a “Super Wednesday” of sorts. A plethora of important data from G7 countries will be released, and key events will take place: February UK GDP; the March US CPI report; and the March Fed meeting minutes.

But it’s the April ECB meeting that will take center stage. In the weeks since ECB President Mario Draghi announced the third TLTRO program, several ECB officials, including Draghi himself, have opined on the downside risks of prolonged negative interest rates. It’s possible that the April ECB meeting yields a central bank that indicates that no further cuts are coming, even if it has seemingly eliminated the possibility of a hike in 2019. See the full April ECB meeting forecast here. 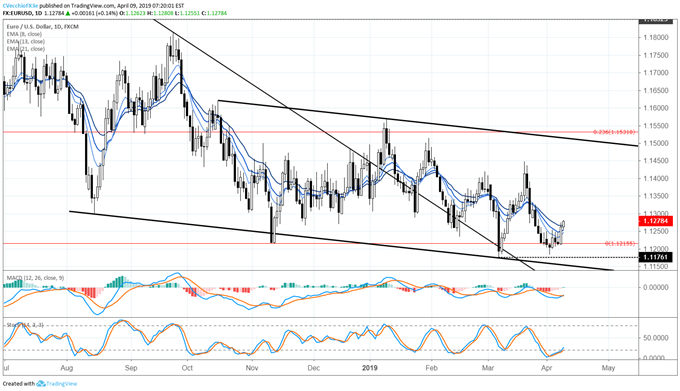 The bearish technical structure has been invalidated in recent days, with EURUSD price turning higher through the daily 8-, 13-, and 21-EMA envelope. While both daily MACD and Slow Stochastics are in bearish territory, they have started to turn higher. It’s worth noting that the recent ‘lower low’ in Slow Stochastics seen in April relative to March did not coincide with EURUSD price moving to a ‘lower low’; in this context, such divergence typically indicates exhaustion to the downside. Accordingly, traders may see EURUSD continue to trade higher in the run up to the April ECB meeting. 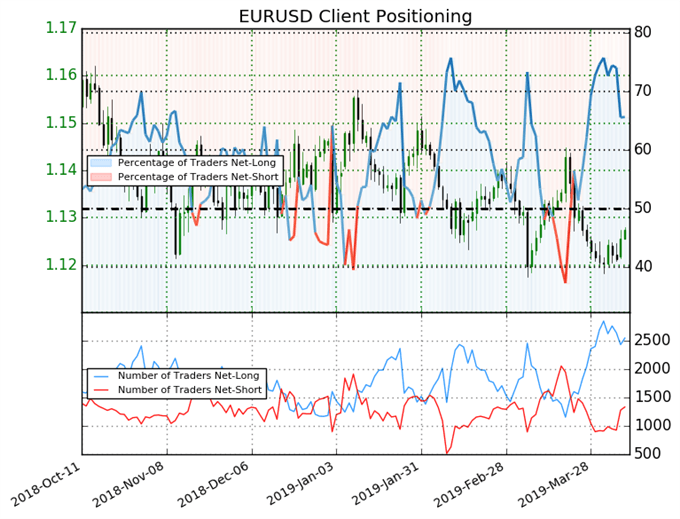