US Dollar Struggles for Footing; Gold Loses Uptrend from Late-November

- Global equity markets are rallying as risk appetite has improved thanks to improving perception regarding a potential US-China trade deal.

- A directional move in tandem by Gold and the Japanese Yen is hardly surprising; traders should be watching out for a major breakdown in the precious metals complex.

- Retail traders continue to buy the dip in the US Dollar.

The US Dollar (via the DXY Index) has seen prices stabilize over the past 24-hours, but the buck isn’t out of the woods just yet. Global risk appetite is improving despite proliferation of geopolitical tensions emanating out of Asia. Traditional safe havens are have been butchered, with the Japanese Yen having its worst week of the year while Gold prices are breaking their uptrend since late-November (daily 21-EMA broken).

Risk On, Regardless of Geopolitics

It’s been a tough week on the geopolitical front. The Trump-Kim summit in Vietnam was nothing short of disappointing in terms of its results, with no path clearly illuminated for denuclearization. Speaking of nuclear powers, India and Pakistan exchanged fire in the Kashmir region. But market participants don’t seem to care all that much. The fact of the matter is that…

…it’s All about China

For traders, few things matter more at present time than seeing a path towards resolution between the world’s two largest economies. Global trade has cooled under the economic trade war, impinging on what had been a steadily improving global economic environment over the past decade following the Global Financial Crisis.

The first piece of good news for traders is that the 25% tariffs on $200 billion of imported Chinese goods won’t go into effect just after midnight on March 2. To this end, US President Trump and Chinese President Xi Jingping are working out the dates for a potential signing ceremony. Yesterday, US President Trump’s Director of the National Economic Council, Larry Kudlow, said that resolution was on the horizon as they were “heading towards a remarkable, historic deal.”

Q4’18 Canadian GDP figures came in weaker than anticipated, a knock-on effect of the collapse in energy prices at the end of last year. The Canadian economy is highly reliant on energy-related activity, which accounts for nearly 11% of GDP. Coming it at just 0.4% (versus 1% expected, from 2%), the annualized quarterly reading was the weakest since Q4’15 (0.5%). To this end, the monthly reading was -0.1% (m/m) for the second consecutive month.

The data hit the Canadian Dollar fairly hard, with USDCAD rallying from around 1.3140 to near 1.3210 at the time this report was written, mirroring another leg-down in interest rate expectations: prior to today, overnight index swaps were pricing in a 24% chance of a 25-bps rate hike from the Bank of Canada by the end of July; those odds have dropped to 18% following today’s growth figures. 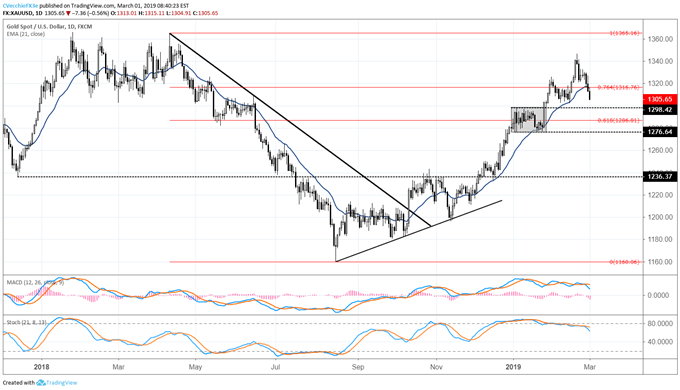 Traders who have been active in precious metals over the past few months may want to take notice of the damage being done to the Gold price chart this week. Since November 28, Gold had maintained its closing level at or above its daily 21-EMA; that is, until yesterday. The first close below the daily-21 EMA in (exactly) three months warns that the conditions and sentiment around the rally have started to change.

No longer is the “buy the dip” mentality appropriate here. We may now be entering a period of digestion following the three-month rally; a breakdown through the mid-February lows/late-January highs area between 1298.42 and 1302.16 is required for a more substantial bearish bias. 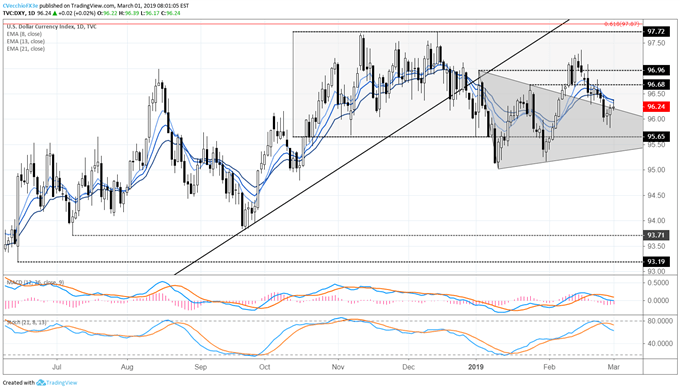 Earlier this week it was noted that “a fully bearish point of view in the short-term would only be valid if the DXY Index were to close this week below 96.20.” The DXY Index is not quite there yet. The bullish key reversal yesterday keeps open the possibility of more sideways trading in the very near-term, particularly as price has returned back above 96.20 – thereby staving off the initiation of the “fully bearish point of view.”

Despite gyrations over the past few days, not much has changed in terms of outlook: price remains fully below its daily 8-, 13-, and 21-EMA envelope; and both daily MACD and Slow Stochastics have turned lower (albeit in bullish territory). A return back above the daily 21-EMA would invalidate near-term bearish potential and would constitute a break of the downtrend from the February 15 high.