US Dollar Price Erosion Yet to Return into Triangle; Key Brexit Date Set

- UK PM May has drawn a line in the sand on Brexit, pointing to March 13 as the day for a “meaningful vote” on a possible extension if no deal is reached by then.

- Fed Chair Powell begins his two-day testimony on Capitol Hill, but instead of looking for specific commentary, traders just want a consistent tone.

The US Dollar (via the DXY Index) is seeing more modest losses accumulate on Tuesday as global risk appetite shifts into neutral amid a flurry of developments across key themes. With the Trump-Kim nuclear summit in Vietnam, Fed Chair Powell on Capitol Hill, more Brexit drama, the ongoing US-China trade war, and now, rising geopolitical tensions between nuclear-armed Indian and Pakistan, there are plenty of reasons for traders to overlook the economic calendar. But they would be ill-served were they to do so, given the scope of US economic data due out over the coming days.

UK Prime Minister Theresa May has laid down new key dates in the Brexit voting process. Now that UK parliament has a direct hand in the negotiations, if a deal isn’t reached by March 13 – and to be clear, she means that if her deal isn’t agreed upon by March 13 – UK PM May has said that she will move forward with a “meaningful vote” on Brexit: no deal, or a one-time extension to Brexit.

As we’ve explained before, an extension to the negotiation window is possible, but the extension would likely be three-months at maximum. In early-July 2019, new MEPs will be elected. It makes sense, from the EU’s perspective, to cleave the relationship with the UK beforehand. It still holds that if the UK is able to send MEPs to the new European Parliament, it’s not much of a Brexit at all, is it?

So it goes: it’s May's way or the highway; her deal or no-deal. We’ve basically hit rewind to where we were at start of December, except now the UK prime minister can't face a "no confidence" vote from either her party or the opposition. With Labour party leader Jeremy Corbyn now backing a second referendum, a general electionis possible should UK PM May prove continually ineffective at governing over the next few weeks. Or, a lot more volatility ahead for the British Pound.

Fed Chair Jerome Powell is climbing the steps of Capitol Hill today to give his semi-annual testimony in front of Congress. Today, he’ll be speaking in front of the Senate Banking Committee and tomorrow he’ll talk in front of the House Financial Services Committee. Rather than looking for any one topic for the central bank chief to touch on, it’s more important to keep track of the tone deployed by Fed Chair Powell.

As discussed after the January FOMC meeting, it was apparent that the Fed chair was embarking on another tone change – perhaps his fourth change in tone since October. Recall that on October 3, 2018 he indicated that be believed that ‘rates are long way from neutral,’ implying that many more rate hikes were coming. Then, on November 28, he seemingly hedged, saying that ‘rates are close to neutral,’ implying that the Fed was nearing the end of its hike cycle. At the FOMC meeting on December 20, the Fed’s glide path of interest rates was reduced.

More recently, on January 4 at a roundtable discussion with former Fed Chairs Bernanke and Yellen, Fed Chair Powell said that he was ‘open to changing normalization,’ in effect striking the Powell Put. Then, at the January 30 FOMC meeting, it was made clear that the Fed was eying the end of its balance sheet run-off by the end of the year.

Traders are looking for consistency from Fed Chair Powell this week, nothing more.

Amidst the fire and fury of the US government shutdown spanning 35 days between December and January, traders were quick to point fingers at fiscal policymakers for the apparent slowdown coming to the US economy. Yet the fact of the matter is that the US economy was starting to slow before the shutdown started on December 23; incoming housing data today should highlight how the economy was losing its footing. Fed rate expectations have been stuck in the mud recently (year-end 2019 and 2020 odds unchanged for nearly four-weeks), and today’s US economic data should do little to stoke a recovery. 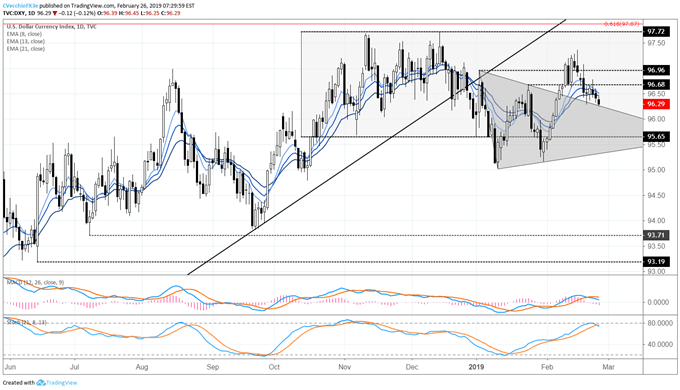 Last week we had taken the view that the DXY Index’s technical structure had eroded, but was not fully bearish yet: “a return back into the symmetrical triangle (below 96.30 by the end of this week) is necessary to constitute a shift to a fully bearish point of view in the short-term.” In a sense, few things have changed, and what has changed has been in a bearish fashion: price is now fully below its daily 8-, 13-, and 21-EMA envelope; and both daily MACD and Slow Stochastics have turned lower (albeit in bearish territory). But price has yet to return into the symmetrical triangle, and therefore, given the price/time relationship, a fully bearish point of view in the short-term would only be valid if the DXY Index were to close this week below 96.20.