- EU officials continue to insist that no changes can be made to the Withdrawal Agreement, but it is possible for a three-month extension of the Brexit window into the end of June.

- American and Chinese trade negotiators aren’t expected to reach a major breakthrough, but the March deadline for the bump in tariffs could be avoided anyway.

The US Dollar (via the DXY Index) has seen its losses halted following doji candles that appeared midweek, although gains are proving difficult to hold onto. Meaningful US economic data have been few and far between this week, but those data that did arrive have showed that the US economy may have indeed lost momentum early in Q1’19 (perhaps due to the government shutdown). Otherwise, traders continue to grapple with the implications of the January FOMC meeting minutes.

Brexit Extension around the Corner?

Across the pond, the EU-UK Brexit negotiations remain at an impasse, with the UK government looking for additional assurances regarding the Irish border backstop and the EU saying that the Withdrawal Agreement can’t be renegotiated. This game of chicken is likely to continue as neither side wants to see the UK crash out of the EU without a deal. Accordingly, we’ve now arrived at the juncture where officials on both sides are openly talking about a three-month extension to the negotiation window beyond March 29.

This is not a surprise. As we’ve explained before, an extension to the negotiation window was a distinct possibility, as was the duration of the extension. Why? In early-July 2019, new MEPs will be elected. It makes sense, from the EU’s perspective, to cleave the relationship with the UK beforehand. Otherwise, if the UK is able to send MEPs to the new European Parliament, it’s not much of a Brexit at all, is it?

US-China Trade Talks May Not Produce Much

Chinese Vice Premier Liu Hi is in Washington, D.C. meeting with US Treasury Secretary Steve Mnuchin and US Trade Representative Robert Lighthizer for a seventh round of trade talks in order to avoid the not “magical” (US President Trump’s words) March 1 deadline for a deal. Otherwise, without a deal, the 10% tariff on $200 billion of imported Chinese goods will evolve into a 25% tariff on March 2.

Early signs from the talks indicate that not much progress is being made. But what little that is being accomplished may simply be laying the ground work to push off the implementation of the higher tariffs on March 2, rather than a sincere effort at resolving the problems in totality. After all, a summit between US President Trump and Chinese President Xi Jingping is required before a deal can be signed, sealed, and delivered – and no summit date has been set yet. 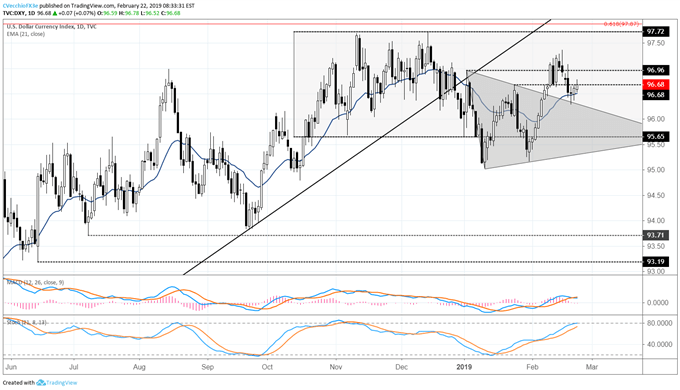 When we commented on the DXY Index technical situation yesterday, price was in the midst of forming an inside day doji candle – a second consecutive doji candle at that. Coming off of a selloff from Friday’s high (as well as the yearly high), the implication was that the near-term outlook was neutral. By the end of the day yesterday, the inside day doji had become an inside day hammer – raising the odds of a near-term low having been established.

In what doesn’t appear to be a coincidence, this week’s lows come back at the retest of the symmetrical triangle resistance, now support in the breakout attempt. To this end, the daily 21-EMA, despite being test, held up on a closing basis as support as well. It thus still holds that a return back into the symmetrical triangle (below 96.30 by the end of this week) is necessary to constitute a shift to a fully bearish point of view in the short-term.