- Commentary from US President Trump regarding the US-China trade negotiations seems to be all that traders need to keep pushing global equities higher.

- The January FOMC meeting minutes should underscore the growing concern among policymakers of a slowing economy and uneven outlook for price pressures.

The US Dollar is trying to find footing amid a four day losing streak, punctuated by bearish outside engulfing bars in two of the past three days by the DXY Index. The Euro’s recovery from fresh yearly lows last week has likewise stalled, coming after European Central Bank Chief Economist Peter Praet discussed the “monetary case” for another round of TLTROs in the future – one that is growing, but may not yet have fulled matured by the March policy meeting.

Elsewhere, yesterday’s gains have turned into today’s losses for the British Pound, where domestic politics continue to muck up the UK’s side of the Brexit negotations. After seven Labour party members split off to form a new party, the Independent Group, three Tories joined them today. While still small in numbers, a sense of disunity among a growing number of UK MPs makes it seem like a no deal, ‘hard Brexit’ isn’t out of the realm of possibility just yet.

The biggest boon for risk appetite over the past 24-hours has been the seemingly positive turn in the US-China trade negotiations. With US President Donald Trump saying that the March 1 deadline isn’t “magical,” global equity markets are rallying amid hopes that the 25% tariffs on $200 billion of imported Chinese goods could be avoided. Likewise, news reports indicate that the two sides will meet again at the end of this week. Against the backdrop increased volatility, one can’t help but feel that stocks have been climbing a ‘wall of worry’ – fears, threats, and promises linger, but nothing truly materializes.

In a week without many significant US economic data releases, the January FOMC minutes will garner extra attention today. The FOMC meeting last month produced a new Summary of Economic Projections that hinted at a more dovish rate hike path than previously anticipated. Yet the most important aspect of the meeting was Fed Chair Jerome Powell’s press conference. Evidently, armed with the backing of the FOMC, the Fed Chair said that they would cease the gradual path of rate hikes and hold a “patient stance” on future moves. So, the few clues that we have should indicate that the January gather was a lively meeting, and therefore, a set of minutes that will contain more market-moving information than usual. 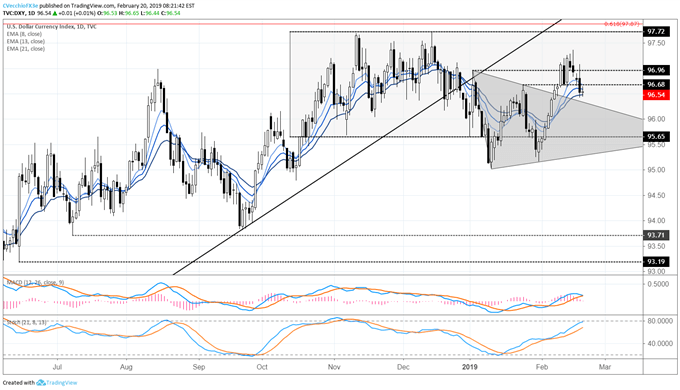 Bearish outside engulfing bars in two of the past three sessions indicates a good deal of pressure building on the DXY Index – and negating any remaining near-term bullish view. With yesterday’s move, price finished back below the daily 8-EMA for the first time since its close on February 1. Now, the DXY Index is sitting atop its daily 21-EMA as daily MACD is set to turn lower; momentum has shifted to the downside. A return back into the symmetrical triangle (below 96.30 by the end of this week) is necessary to constitute a shift to a fully bearish point of view in the short-term.