- The DXY Index breakout higher outside of its symmetrical triangle increases the odds of a return back to the December 2018 highs around 97.72.

- Despite the US Dollar breakout, Gold prices have been holding steady and remain within their uptrend from the November 28 and December 14 lows.

- Retail traders continue to add to their net-short US Dollar positions, continuing to add to EURUSD and GBPUSD longs in recent days.

The US Dollar (via the DXY Index) has finally been able to breakout of the symmetrical triangle that governed trading for the first six weeks of 2019, and is now taking a breather. Clearing the January 24 swing high, the DXY Index has been propelled higher by news that another US government shutdown will be avoided at the end of this week, as well as signs that US-China trade war could de-escalate shortly.

Another Spin around the Trade War Cycle

With the latest development in the US-China trade war negotiations, it’s just another run through the trade war cycle that’s been on rinse-and-repeat for the past year. As we’ve previously noted, the cycle goes: (1) Trump administration is tough on China; (2) financial markets sell off on trade war concerns; (3) Trump administration hints at US-China trade deal; (4) financial markets rally on trade deal hopes; (5) No deal materializes.

If financial markets are rallying on the back of the news, we’ve moved into stage 4; naturally, the next evolution in the US-China trade war negotiations would be for a letdown, where little real progress is made and concerns rise again that tariffs will be implemented come March 2.

Congressional Democrats and Republicans announced late last night that they’ve reached an agreement on how to move forward with both border protection and appropriated funding. The easy part is out of the way. The more difficult task is now convincing US President Trump to sign the budget into law. Early signs indicate that he intends on doing so, although the exact details of the budgetary agreement have yet to be revealed. The shutdown that lasted 35-days between December 23 and January 25 cost the US economy roughly -0.2% of GDP, according to the Congressional Budget Office; there seems to be a strong desire to avoid another self-inflicted wound on the economy by both parties.

Looking Ahead to RBNZ Rate Decision

The Reserve Bank of New Zealand rate decision tonight (in New York; tomorrow in Christchurch) comes at an interesting moment, with the New Zealand Dollar under significant pressure in the first half of February. With Reserve Bank of Australia Governor Philip Lowe taking on a more dovish tone, and given how closely tied together the Australian and New Zealand economies have been historically, traders have been pricing in a more dovish RBNZ when policymakers meet this week. With jobs growth slowing and below the RBNZ’s medium-term target of +2%, there’s room for 2019 rate hike expectations to loosen. At the start of February, rates markets were pricing in a 2% chance of a 25-bps rate cut this month and an 18% chance of a 25-bps rate cut by June; now, rates markets are pricing in a 9% chance for a February cut and a 42% chance of a cut by June. 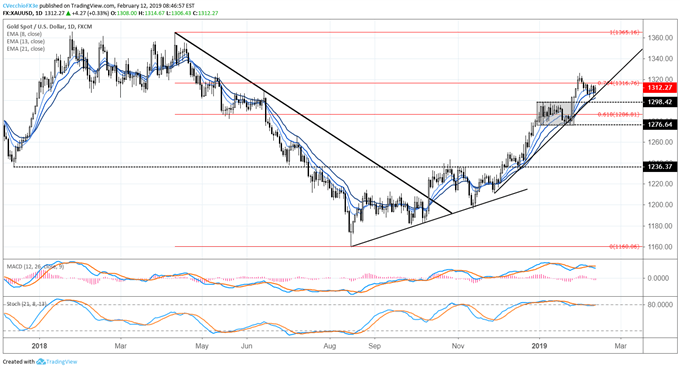 Despite the fact that the US Dollar has broken out of its symmetrical triangle and US Treasury yields have moved higher, Gold prices have proven incredibly stable, keeping intact the uptrend from the November 28 and December 14 lows as well as the daily 21-EMA. It thus still holds that “the correction eyed since the middle of last week may finally be finished, however, now that Gold prices have broken above the descending trendline from the January 31 high.” Price is still above its daily 8-, 13-, and 21-EMA envelope, while both daily MACD and Slow Stochastics are in bullish territory today. 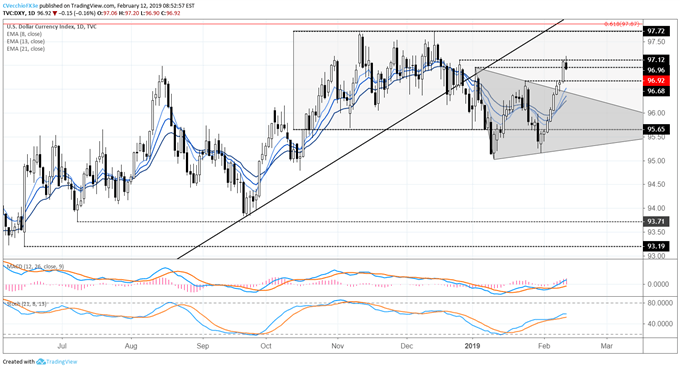 The DXY Index cleared topside resistance outlined last week, coming into play near 96.45/50 (triangle) and 96.68 (January 24 swing high). The initial area eyed near 96.96 – the symmetrical triangle base – was easily reached. Attention is now shifting towards an ultimate return back to the October 2018-January 2019 range highs near 97.72. With price comfortably above its daily 8-, 13-, and 21-EMA envelope, a brief pause may be due as prices are overextended in the short-term; but by no means would a pause in rally automatically mean the bull trend is over. With both daily MACD and Slow Stochastics pointing higher and in bullish territory, momentum remains firmly to the topside for the DXY Index.