No Breakout for US Dollar; Gold Turns Higher Again

- The DXY Index has stayed within the confines of its 2019 symmetrical triangle, hitting the January 24 swing high in the process.

- Amid weakness in the US Dollar as well as softer US Treasury yields, Gold prices continue to push back to the topside after breaking their downtrend from the January 31 high.

- Retail traders remain net-short the US Dollar, having added to EURUSD and GBPUSD longs in recent days.

The US Dollar (via the DXY Index) is failing to crack through topside resistance for the second day in a row, a sign that the week-long rally may have finally reached its point of exhaustion. But with signs that another US government shutdown could be avoided with a deal among Congressional Democrats and Republicans this weekend, as well as evidence that the economy did not suffer as greatly as feared during the prior shutdown, a bullish catalyst may yet be around the corner.

Back Around the Trade War Cycle

Not all is sanguine for the US Dollar, however. The US-China trade negotiations appear to have hit another snag, which is not surprising to say the least; it’s just another run through the trade war cycle that’s been on rinse-and-repeat for the past year. As we’ve previously noted, the cycle goes: (1) Trump administration is tough on China; (2) financial markets sell off on trade war concerns; (3) Trump administration hints at US-China trade deal; (4) financial markets rally on trade deal hopes; (5) No deal materializes.

It would appear that we’re back to stage 2 with news that a meeting between US President Donald Trump and Chinese President Xi Jingping won’t take place before the March 2 deadline. Stage 3 could be just around the corner, when the Trump administration promises to extend the negotiating window and delays levying the 25% tariffs on $200 billion of imported goods.

Lower US Yields are good for Gold

Amid the resuscitation of US-China trade war concerns coming back to the forefront, US Treasury yields, particularly at the long-end of the curve, have started to shift lower again. This may prove meaningful to Gold, which currently has a 20-day correlation of -0.82 with the US Treasury 10-year yield; as yields go down, Gold goes up. While the inflation environment remains weak, falling US Treasury yields (nominally) will help undercut real yields, which tends to be beneficial for precious metals. 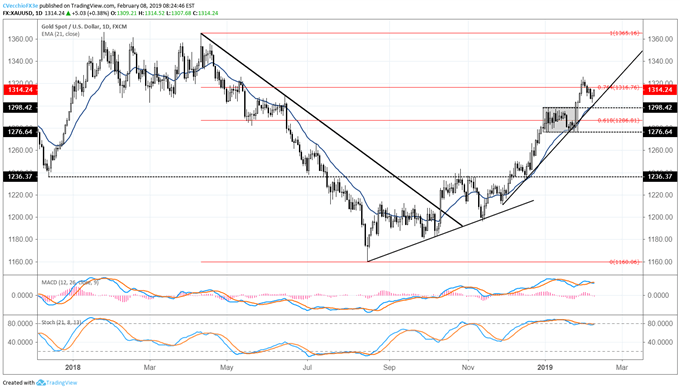 Our bullish view on Gold prices hasn’t wavered despite the near-term pullback, given that the uptrend from the November 28 and December 14 lows as well as the daily 21-EMA have remained intact. The correction eyed since the middle of last week may finally be finished, however, now that Gold prices have broken above the descending trendline from the January 31 high (as of this 5 EST on the hourly timeframe). Price is still above its daily 8-, 13-, and 21-EMA envelope, while both daily MACD and Slow Stochastics have issued buy signals in bullish territory today. The technical backdrop is no longer corrective. 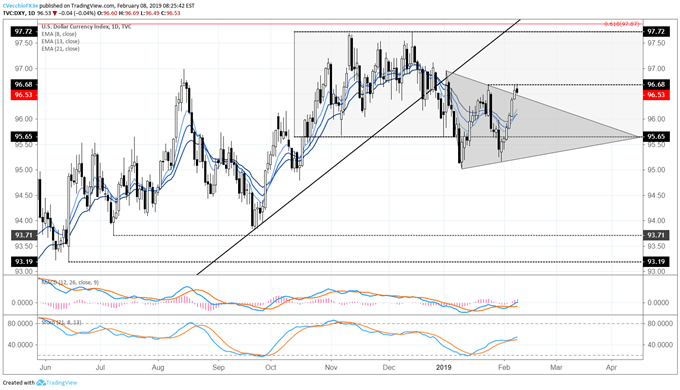 The DXY Index continues to struggle at the topside resistance outlined earlier this week, coming into play near 96.45/50 (triangle) and 96.68 (January 24 swing high). As such, the technical outlook from yesterday hasn’t changed materially. A weekly close above the January 24 high is necessary to confirm a breakout attempt. Should prices breakout higher, the triangle base at 96.96 would be eyed initially before an ultimate return back to the October 2018-January 2019 range highs near 97.72. Otherwise, until bullish confirmation is achieved, such a consolidative pattern dictates patience by traders, as well as an open mind to resolutions on either side of the triangle.