- The DXY Index rally has run into its first obstacle in its week-long march higher, hitting triangle resistance as well as the January 24 swing high.

- Meanwhile, with the US Dollar rally hitting pause, Gold prices have ceased their pullback and remain within the confines of the November 28 and December 14 uptrend.

- Retail traders have consistently sold the US Dollar over the past week; net-shorts have risen considerably in EURUSD and GBPUSD.

The US Dollar (via the DXY Index) rally is taking a breather for the first time in a week after failing to crack through key consolidative resistance that’s defined trading thus far in 2019. The symmetrical triangle in place since the start of the year has been maintained for now, and a lack of clear catalysts over the coming sessions suggests that prices may well stay constrained through the end of the week. The greenback’s earlier gains were propelled not by its own bullish factors but rather a deterioration in conditions for two of the DXY Index’s largest components, the British Pound and the Euro.

For the British Pound, the Bank of England rate decision produced no change in rates, but the Quarterly Inflation Report was clearly tilted dovish amid cuts to both the growth and inflation forecasts. Against the backdrop of the EU-UK Brexit talks having hit an impasse, rates markets have effectively priced out any BOE tightening in 2019. GBPUSD’s technical indicators have indeed started to rollover, but this pair (as all GBP-crosses) carries the Brexit caveat (making technicals less reliable).

For the Euro, the European Commission cuts to the 2019 GDP forecast underscore what has been a deteriorating growth environment for some time. As discussed in the Euro weekly trading forecast, economic data momentum remains exceptionally weak and inflation expectations continue to drop. The European Central Bank’s dictum that it needs “more monetary evidence” before pursuing another stimulus program may soon be fulfilled.

At a minimum, traders should be looking for ECB officials to start pushing back on their current timeline to raise rates around “summer 2019,” much to the chagrin of ECB President Mario Draghi (whose term expires in October 2019 and would like to end extraordinary easing measures before he leaves (i.e. declare victory)). There will be more pain ahead of EURUSD (as well as other EUR-crosses) as long as the ECB fails to recognize its own policy shortcomings. 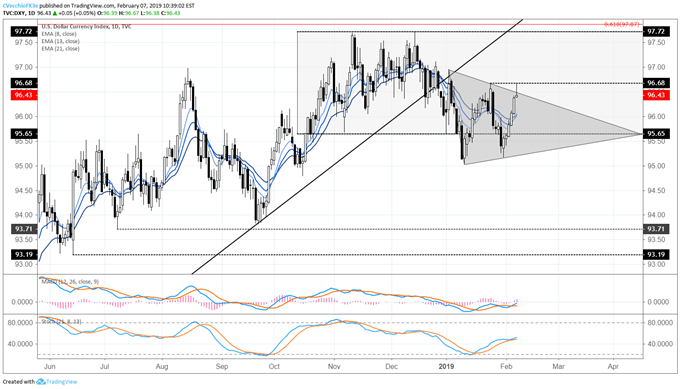 The DXY Index has run into topside resistance outlined earlier this week, coming into play near 96.45/50 (triangle) and 96.68 (January 24 swing high). A weekly close above the January 24 high would be preferred for confirmation that a breakout has started to transpire. Momentum indicators are starting to perk up, with Slow Stochastics moving into bullish territory and daily MACD close to flipping above its signal line. Meanwhile, the daily 8-, 13-, and 21-EMA is back in bullish sequential order.

In the event of a bullish breakout, the triangle base at 96.96 would be eyed initially before an ultimate return back to the October 2018-January 2019 range highs near 97.72. Otherwise, until bullish confirmation is achieved, traders would be well-suited to remain patient. After all, such a consolidative pattern dictates patience by traders, as well as an open mind to resolutions on either side of the triangle.