- The January FOMC meeting is the first at which Fed Chair Powell will begin giving press conferences each meeting moving forward.

- The potential economic impact of the December-January government shutdown – as well as the high odds of another come mid-February – should lead the FOMC to a broadly neutral, observational tone today.

- Retail traders have neutralized their Euro and US Dollar positions as prices have settled in recent days.

The US Dollar (via the DXY Index) has gained modest ground in the run-up to the Federal Reserve’s January policy meeting amid offsetting moves in the British Pound (slightly higher) and the Euro (slightly lower). Headlines regarding the Brexit negotiations continue to pour out, although it’s becoming difficult to see a path forward from here if the EU’s position is that the UK can’t renegotiate its Withdrawal Agreement.

Elsewhere, US Trade Representative Robert Lighthizer and Chinese Vice Premier Liu He are meeting in Washington in order to find a way to avoid the next round of tariffs being imposed at the start of March. As it stands, the 90-day détente ends on March 1, and on March 2, tariffs on $200 billion worth of US-imported goods from China. After the arrest and publicly declared intent to prosecute Huawei CFO Meng Wanzhou, it makes sense that the current talks might not be that productive at all.

The Federal Reserve has had a bit of a communication problem the past few months, and the January FOMC meeting may be the first effort to clear up any misunderstandings.

It’s important to recall the evolution of Fed Chair Jerome Powell’s commentary in recent months. On October 3, 2018 he indicated that be believed that ‘rates are long way from neutral,’ implying that many more rate hikes were coming. Then, on November 28, he seemingly hedged, saying that ‘rates are close to neutral,’ implying that the Fed was nearing the end of its hike cycle. At the FOMC meeting on December 20, the Fed’sglide path of interest rates was reduced. Most recently, on January 4, Fed Chair Powell said that he was ‘open to changing normalization,’ in effect striking the Powell Put.

Normally, a January FOMC meeting wouldn’t give the opportunity for the Fed Chair to clarify his prior remarks in a ‘live’ setting. Starting this week, all FOMC meetings moving forward will feature a press conference by the Fed Chair, whereas previously, press conferences were only held at the quarterly meetings that produced a new Summary of Economic Projections. In theory, this makes the January meeting ‘live.’

In reality, rates markets are pricing in a greater chance of a rate cut than a rate hike at the forthcoming meeting. Amid the US-China trade war’s growing global impact, the crash in energy prices during Q4’18, and more recently, the US government shutdown, it stands to reason that Fed Chair Powell and the FOMC will be keeping rates on hold for the coming months. To this end, Fed Chair Powell is likely to strike a neutral tone calling for more observation of economic data to suss out the impact of the shutdown before more policy tightening may be deemed appropriate. 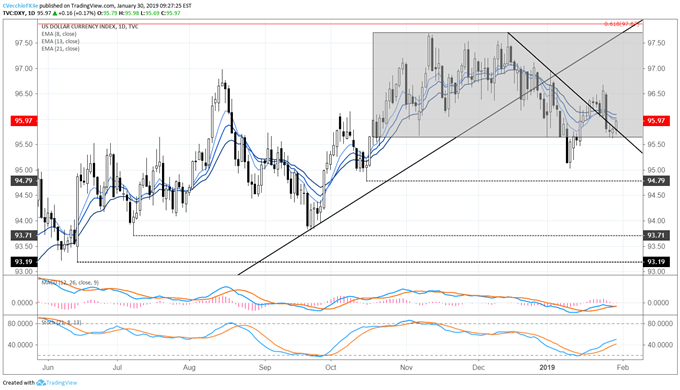 Yesterday we said that “The lack of cohesion among indicators and candlesticks suggests that more price development is necessary before a directional move occurs; traders should anticipate choppy trading moving forward.” This lack of cohesion persists, with the DXY Index below its daily 8-, 13-, and 21-EMA envelope still, but now price has started to rise back above the trendline from the December and January swing highs. Daily MACD remains below its signal line, but Slow Stochastics continue to push higher, now through its median level. Accordingly, it still holds that DXY Index needs to move outside of the 95.65-97.71 consolidation that formed between mid-October and early-January before a directional move is sought after. Even then, support would be close by at the 2019 low at 95.03. Choppy trading should persist over the coming days.