- The EUR/USD reversal during the ECB press conference is producing a bullish hammer on the daily chart, in turn helping DXY Index form a bearish shooting star.

- US Secretary of Commerce Wilbur Ross said that China and the US are “miles and miles” apart on trade negotiations and doesn’t expect a deal to come together next week.

- Retail traders have been quick to trim both Euro and US Dollar positioning during the reversals post-ECB today.

The US Dollar (via the DXY Index) has returned back to an area of former support that is once again proving pivotal this week. Amid concerns that the US federal government is hurtling towards another shutdown in less than three-weeks time, traders have been apprehensive about returning to the long greenback trade – even as global growth concerns continue to proliferate.

We’ve arrived at another key Brexit deadline with UK Prime Minister Theresa May heading to parliament this evening to try and whip more votes for her EU-UK deal. This round of voting is on a slew of amendments that are designed to help make PM May’s deal more palatable for far-right wing Brexiteers over the question of the Irish border backstop and the 1998 Good Friday Agreement. Similarly, several amendments being proposed are aimed at helping prevent a no deal, ‘hard Brexit’ (e.g. grant permission to PM May to secure an extension to Article 50 if she can’t reach a deal by the end of February).

Given UK PM May’s pitiful track record of failing to properly whip votes – the ‘Plan A’ Brexit deal was rejected by a 230-vote margin, the biggest loss for a prime minister since 1924 – there are few reasons to believe that any sort of meaningful majority will emerge today on any vote. That’s not to say that failure today will provoke significant price action in the British Pound; in fact, unless there is a strong show of unity across Tory and Labour party lines to rework the deal altogether, it’s doubtful that the market reaction will be memorable.

The last few days of any given month, as well as the first few days of the following month, typically bring about the release of several important economic reports; the transition week between January and February 2019 is no different. Besides the key Brexit vote in parliament tonight, this week traders are also awaiting the Federal Reserve’s January policy meeting, the Q4’18 Eurozone GDP report, the US-China trade negotiations (now with the added backdrop of the US Department of Justice bringing charges against Huawei CFO Meng Wanzhou), and the January US Nonfarm Payrolls report.

Against this backdrop of heightened event risk, investors have been curtailing their appetite for taking on long positions in high beta assets or high yield currencies. While this has left the US Dollar on uneven footing – after all, it is a focal point given that the government shutdown’s collateral damage on the economy and the knock-on effect to Federal Reserve policy – one asset has clearly benefited in recent days: Gold. 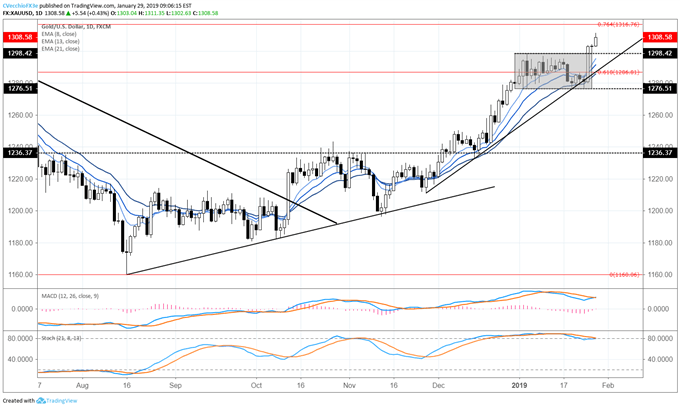 When we last looked at Gold, price had moved down to key support. But price held that key support, failing to clear out the January 4 low at 1276.51 in the process; Gold bottomed out at 1276.65. With the daily 21-EMA proving to be formidable support, as well as the rising trendline from the November 28 and December 14 swing lows, the neutral consolidation pattern at the start of 2019 was maintained.

Since Friday, however, Gold’s neutral consolidation has morphed into an outright bullish breakout attempt; Friday’s close eclipsed the range high set on January 4 at 1298.42. Concurrently, with price well-established above the 61.8% retracement of the entire 2018 high-low range, there is sufficient evidence to think that this Gold breakout attempt is a significant step towards cementing a longer-term bullish forecast. In the near-term, the equal-measured breakout move from the range calls for Gold to rally towards 1320 over the coming sessions. 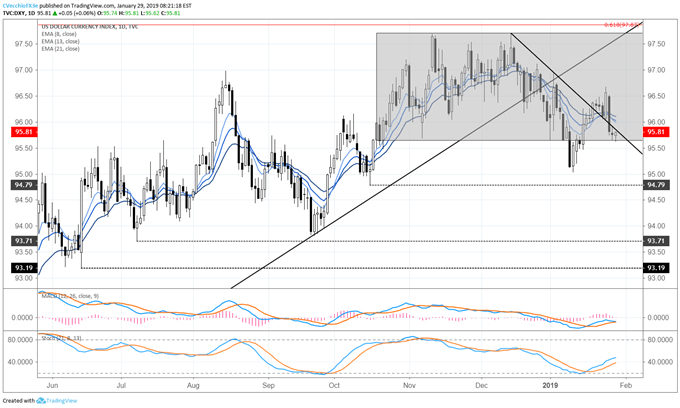 The DXY Index’s technical structure has deteriorated in recent days, following Friday’s bearish piercing candle that saw price fall back below the trendline from the December and January swing highs. Similarly, price is now below the daily 8-, 13-, and 21-EMA envelope, while daily MACD has turned lower below its signal line – signs that bearish momentum is starting to gather pace. But before a fully bearish view can be embraced, the DXY Index needs to move outside of the 95.65-97.71 consolidation that formed between mid-October and early-January. Even then, support would be close by at the 2019 low at 95.03. The lack of cohesion among indicators and candlesticks suggests that more price development is necessary before a directional move occurs; traders should anticipate choppy trading moving forward.