- With USD/JPY rallying after the BOJ rate decision, the DXY Index has been able to maintain its break of the downtrend from the December high.

- The US government shutdown has entered day 33, and there are few reasons to believe it will end before the week is over.

- Retail traders continue to fade US Dollar strength, suggesting that more gains may be left in the tank.

The US Dollar (via the DXY Index) is pointing higher once again, turning the session’s earlier losses into a modest gain ahead of the cash equity open in New York. Even as the US government shutdown churns into day 33, “no news is [still] good news” as the flow of weak US economic data has been stemmed. As such, FX markets continue to take cues mainly from Europe – Brexit negotiations, ECB meeting tomorrow, and now, the World Economic Forum in Davos – and Asia – the state of the US-China trade war détente.

Big Day Tomorrow for the Euro: PMIs and ECB on Thursday

Thursday brings forth the preliminary January PMIs ahead of the European Central Bank rate decision, both of which should prove consequential to the Euro (which has been sidelined by a lack of data on Wednesday). In terms of the data, the preliminary January Eurozone Composite PMI is due in at 51.4 from 51.1, a modest improvement but nothing that should inspire much confidence.

In terms of the ECB meeting, it’s best to put the rate decision in context of recent price developments. Inflation expectations have been destabilized over the past few months, but the trend is especially pronounced over the past year: the 5-year, 5-year inflation swap forwards peaked in January 2018 at 1.774%; they finished last week at 1.553%. With the final December Eurozone CPI report showing topline inflation of +1.6% y/y, it’s difficult to think that ECB President Draghi and the Governing Council will be of the mindset that their four criteria for ending their ultra-loose monetary policy will be met. In particular, reality has disappointed the expectation that “inflation will be durable and stabilize around those levels with sufficient confidence.”

Whereas ECB President Draghi has previously suggested that a rate hike could materialize sometime around “summer 2019,” there is ample evidence to suggest that this event horizon will be pushed back by a few months. It seems doubtful that the Governing Council would want to make any prognostications beyond the end of this calendar year, it still being the first month of 2019 but also due to the fact that Draghi’s term expires in October. The ECB may very well keep a rate hike for 2019 on the table – for now.

In the Mid-Week Trading Q&A today, one theme arose among questions regarding the British Pound: ‘why is the Pound rallying as Brexit negotiations go off the rails?’ This is a point that bears greater clarification.

To a certain extent, we’ve crossed the Rubicon now that key Brexit deadlines are around the corner (January 29 – parliament takes over Brexit negotiations; March 29 – UK set to leave EU), and as things stand, a no deal, ‘hard Brexit’ would be the default outcome. But lawmakers are skittish about leaving the EU without a deal in place, and as a result, the UK parliament has passed a motion to prevent a no deal, ‘hard Brexit’ altogether. As the options are whittled down – UK Prime Minister Theresa May has ruled out a second referendum or a general election – it seems increasingly likely that an extension will be granted. Even so, whether or not a deal can come together after another two or three months of handwringing is another question altogether.

The fact of the matter is that if Brexit is delayed or canceled – odds of that are undoubtedly rising – let’s not forget that GBP/USD was trading at $1.5000 the day of the Brexit vote in June 2016. The Sterling’s Brexit paradox is such that the more disorganized UK PM May’s government’s approach to Brexit appears, the more traders are inclined to speculate on a rebound; and when signs point to an orderly Brexit, traders have been happy to step in and sell.

There are two items of interest out of Asia on Wednesday that could impact FX trading through the North American trading session. First, reports have emerged that the US has spurned China’s offer for pre-negotiations before the next round of talks begin. Coupled with news that the US is pushing forward with the extradition of Huawei executive Meng Wanzhou from Canada, and it’s evident that headlines around the US-China trade negotiations have soured some over the past 48-hours. We’ll be looking for a statement from either the US Treasury Department or the White House’s National Economic Council for clarification on these matters (a soft denial on Tuesday hasn’t dismissed this issue in the slightest).

Second, the Bank of Japan meeting is proving to be consequential for the Japanese Yen following the downgrade of the central bank’s inflation forecast. Such a downgrade is not necessarily a surprise, given that the island nation is reliant on oil imports (per the most recently made available data from 2013, Japan imports 96% of the energy it uses (prior to the nuclear reactors being brought back online post-Fukushima)) and there has been a major downdraft in energy prices since the start of October.

That USD/JPY has been able to rally in the wake of the BOJ decision has been one of the tell-tale signs of an improvement in risk appetite. In turn, with global equity markets turning higher, Gold has quickly fallen out of favor (Gold and the Yen are usually highly correlated; the 5- and 20-day correlations between USD/JPY and Gold are -0.90 and -0.89, respectively). Now, Gold prices are quickly exhibiting weakness around key support that could very-well determine the next directional move. 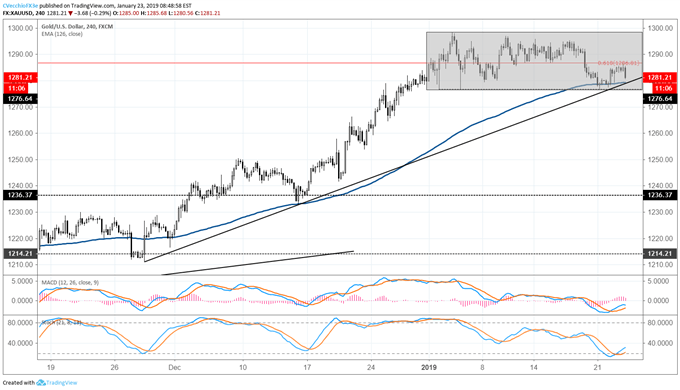 When we last discussed Gold on January 18, we said that “Broadly speaking, what is still a neutral consolidation pattern is taking on a more bearish flavor…in the near-term, a move down to 1276.64 can’t be ruled out.” Earlier this week, Gold prices bottomed out at 1276.65.

Gold’s near-term forecast remains weak in the short-term, even if range support has been reached, as price continues to hold below the swing lows from January 10 and 15. For now, recent trend support is holding up: the daily 21-EMA (expressed as the 4-hour 126-EMA on the chart above) and the rising trendline from the November 28 and December 16 swing lows (confluence around 1279 today). A more significant bearish bias would not be appropriate unless a weekly close below 1276.64 is achieved. 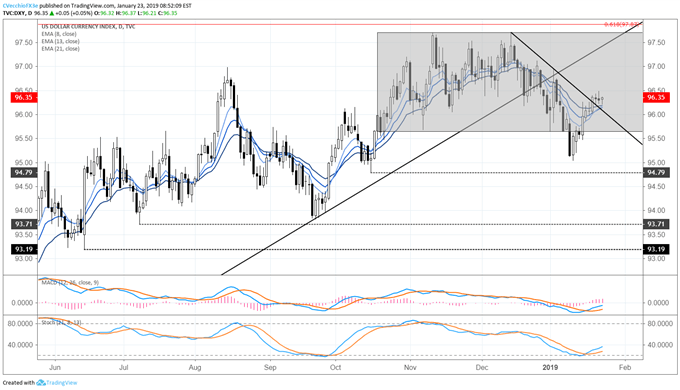 The DXY Index is maintaining altitude beyond the downtrend from the December 14 and January 2 highs, above the entirety of its daily 8-, 13-, and 21-EMA envelope in the process. Both daily MACD and Slow Stochastics are pressing high higher (albeit still in bearish territory). Yesterday’s price action nearly establish a bearish outside engulfing bar, but that was narrowly avoided.To this end, more price development is necessary to upgrade the DXY Index’ forecast to ‘bullish’ – it’s back in the consolidation from mid-October to early-January – but the improvement in US Dollar’s near-term technical prospects is real.