No News is Good News for the US Dollar; Pound Edges Higher

- The British Pound continues to advance on hopes that the UK will get a better deal from the EU – otherwise, Brexit will be avoided altogether.

- A lack of significant US economic data means traders have stopped paying attention to the fact that the US economy was slowing down by the end of Q4’18.

The US Dollar (via the DXY Index) continues to push higher, albeit only modestly, as attention continues to remain on the unfolding political drama in Europe. While the third week of the month typically brings with it a slew of important economic data releases, with the US government shutdown, many of the agencies that report economic data have shuttered their doors for the time being. As a result, the US economic calendar has been significantly scaled back, with the vast majority of data releases over the past two weeks having been canceled.

Has the US Government Shutdown Been Bullish USD?

No news may be good news for the US Dollar. The US economy was slowing down by the end of Q4’18 (Citi Economic Surprise Index turning lower, ISM and PMI surveys falling back towards 50), besieged by tighter Fed monetary policy and the US-China trade war. Without any new data releases, traders have little reason to adjust their views on the Fed or the US economy for 2019.

Against the backdrop of rising political concerns in Europe and a Brexit process that has seemingly been derailed, the US Dollar has been able to weather a tumultuous start to 2019. How long the dollar updraft continues is another question: the US economy is shedding -0.13% per week during the US government shutdown, a pace that will only increase as time presses forward (the impact does not progress linearly, it compounds).

If US President Trump and Congressional Democrats are as entrenched as they appear, the shutdown could end up zeroing out growth in Q1’19 – a development that would certainly have profound consequences for the Fed’s rate hike path this year.

And yet, here we are with Brexit: UK PM Theresa May is coming off of the worst defeat in parliamentary history, and for some reason, traders are acting as if this strengthens her negotiating hand with Brussels. Let’s be clear: the EU is under no obligation to resolve the UK’s domestic political squabbles, just as French President Emmanuel Macron said yesterday. When it comes to the Irish border issue, the EU is going to side with Ireland, not the UK – no matter what. There is little incentive for the EU to give the UK a parachute here; after all, one of the goals of Brexit, from the EU’s perspective, is to make the process so onerous that it deters other countries from trying to leave (an act of self-preservation).

Accordingly, the Brexit process has been winnowed down to three outcomes: May’s EU-UK deal (which was shot down 432-202); no deal (aka “hard Brexit,” which no one seems to want); or no Brexit at all. That there is British Pound strength continuing to build suggests that markets are leaning into option three, ‘no Brexit.’ 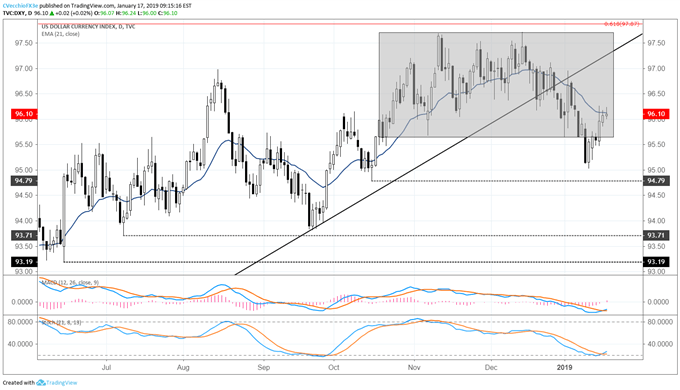 The technical picture has not changed in the past 24-hours for the DXY Index, which is still back in the near-three-month consolidation above 95.65 range support. Price continues to reject attempts to rise above the daily 21-EMA, having failed so far today after failing on Tuesday and Wednesday. Concurrently, both daily MACD and Slow Stochastics have turned higher (albeit still in bearish territory). The shift to a neutral outlook for the US Dollar remains valid.