DXY Index Hangs on by a Thread, Pound Rallies ahead of Key Brexit Vote

The US Dollar (via the DXY Index) has started the week trading only slightly softer, having entered the week at 95.66, last trading at 95.63 at the time this report was written. But by no means should the lackadaisical start be taken a sign that global markets are on firm footing; rather, many key instruments are trading around breakout/breakdown levels that could very well determine the next direction for financial markets.

The British Pound is in the spotlight at the start of the week ahead of the UK parliament’s vote on UK PM Theresa May’s EU-UK Brexit deal on Tuesday, January 15. Recall in early-December that the vote was postponed due to concern that there weren’t enough votes for it to pass; now, it seems that the same set of factors is a bullish catalyst for the British Pound. Instead of markets taking the projected failed vote as a sign that the UK is careening towards a no-deal ‘hard Brexit’ outcome, traders have instead taken up the belief that rejection tomorrow will mean that Brexit will be avoided altogether.

If that’s the case – the parliamentary vote is merely paving the path towards unwinding everything since the June 2016 Brexit vote – that doesn’t mean that the British Pound is out of the water just yet. It’s almost certain that the country could move for another general election should the Tory government fail under Theresa May, and the prospect of Labour party leader Jeremy Corbyn coming to power may not be seen as appealing by financial markets. Needless to say, politics will continue to be the prevailing factor for the British Pound for the foreseeable future – regardless of what happens tomorrow.

With attention focused on the Brexit vote, traders may have missed the disappointing Chinese trade figures released overnight. The December Chinese trade balance report showed the weakest performance by both exports and imports in three years. Meanwhile, China’s trade surplus with the United States hit an all-time high in 2018. Coming against the backdrop of the trade détente in the US-China trade war, these data seem to fall in favor of US President Trump increasing the pressure in the immediate future.

Meanwhile, US President Trump’s tweets over the weekend and early-Monday would seem to suggest that he remains dug-in over the border wall and the US government shutdown. Equally so, Democratic leaders in Congress don’t appear ready to budge either; gridlock is back in Washington, D.C. The resulting set of factors has led to some modest weakness in equity markets around the globe. The combined fears of the US-China trade war picking back up and the US government shutdown staying prolonged can deteriorate risk appetite – thereby pushing US Treasury yields lower – effectively neutralizing any safe haven appeal that US Dollar may have. In turn, traders should keep an eye on Gold prices this week: 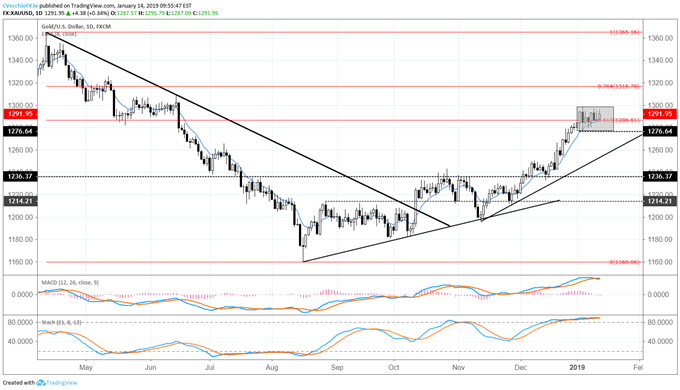 Gold prices have been consolidating at the start of 2019 following a breakout December. Yet the technical picture for Gold is simple: bullish. Price is above its daily 8-, 13-, and 21-EMA envelope, having closed above its daily 8-EMA every session since December 17. Meanwhile, both daily MACD and Slow Stochastics continue to remain in ‘overbought’ conditions – a sign of strong bullish momentum. In light of the consolidation the immediate outlook for Gold is neutral: a topside move through 1298.42 would signal a bullish breakout; a drop through 1276.53 would suggest a bearish reversal. 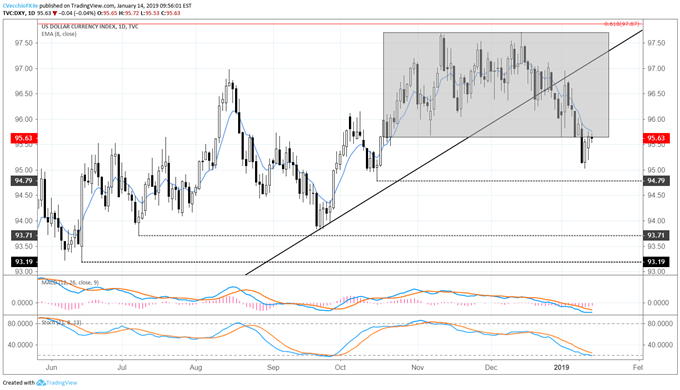 Overall, the DXY Index was barely able to stave off a close below the near-three-month range to the downside at the end of last week, closing at 95.66, barely above 95.65 range support. Follow-through will be key; failure to do so immediately would suggest that bears are still in control. Given that price remains below its daily 8-, 13-, and 21-EMA envelope, and that both daily MACD and Slow Stochastics continue to point lower as they trend deeper into bearish territory, downside resolution is still eyed for the US Dollar.