- The US Dollar (via the DXY Index) rebound is pulling it back into its range from mid-October to early-January between 95.65 and 97.72.

- Without significant movement along any thematic front – the US-China trade war, the US government shutdown, or the Federal Reserve’s rate hike path – the US Dollar surge this morning is likely tied to the vanilla options expiry at 10 EST/15 GMT.

- Retail traders continue buying the dip in the greenback, fading advances by EUR/USD and GBP/USD.

The US Dollar (via the DXY Index) has rallied sharply around the start of the US cash equity open, turning from negative to positive just as stock trading got underway in New York. But following the December US Consumer Price Index that showed the weakest headline pace since August 2017 – and at +1.9% y/y, below the Fed’s medium-term target of +2% - some traders are left scratching their heads as to the catalyst.

Many Factors, No Clear Catalyst

A look around the markets and news wire yields no clear catalyst for the move; there are many cross-currents at present time. Signs that the US-China trade war negotiations may be moving in the right direction aren’t filtering through across markets, even has USD/CNH has fallen for the third consecutive day; global equities and bond yields are both lower on the day. Elsewhere, there are few signs that the US government shutdown will end anytime soon.

Geopolitics may be closer to the source of consternation this morning, with news reports detailing troop movement along the Turkish-Syria border, coming on the back of the news that the US military has started winding down its operations in the Syrian theater. That an American ally in NATO (Turkey) would attack a US-backed military operation (run by the Kurds) may be causing some unease among traders given the potential ramifications for the conflict growing into a more direct showdown with Iran and Russia.

However, none of these explanations perfectly fit the way markets have responded this morning. Evidence that inflation is falling below the Fed’s medium-term target should provoke a drop in US Treasury yields and the US Dollar; they’re not. A weaker USD/CNH should be spurring more risk appetite, particularly between the Australian and New Zealand Dollars; it’s not. Signs of spreading conflict in the Middle East involving actors critical to global oil trade should be a catalyst for higher prices; they’re not.

Taken from this perspective, the fact that global stocks, bonds, commodities, and currencies don’t appear to be moving in a coordinated fashion makes sense: traders were pushing prices hard in the run up to the options expiry. The fact that key spot prices in FX markets landed directly in the middle of the key expiry bands may confirm this motivation. The result: we should see more familiar correlations and market reactions return over the course of the day; and now that the options expiry has passed, volatility may cool barring a catalyst across the news wire. 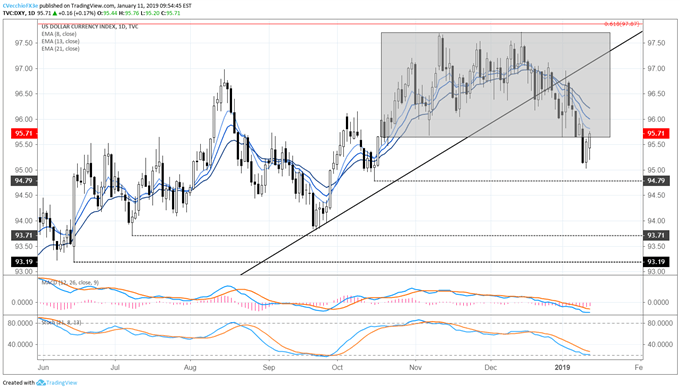 The DXY Index range breakdown on Wednesday below 95.65 suggested that a shift to a more aggressively bearish momentum profile was taking place. We wrote, “A weekly close below 95.65 is still required, but the framework for a top in the US Dollar is in place.” While this remains true, price action today may give reason to question the breakdown scenario.

Having exited the near-three-month range to the downside on Wednesday, the DXY Index is now attempting to climb back into its mid-October to early-January range between 95.65 and 97.72. Nevertheless, price remains below its daily 8-, 13-, and 21-EMA envelope. Likewise, both daily MACD and Slow Stochastics continue to point lower as they trend deeper into bearish territory. In light of the fact that the uptrend from the April and September 2018 lows remains broken, downside resolution is ultimately still possible.