- The US Dollar (via the DXY Index) has fallen to its lowest level since October 17, 2018 as traders continue to adjust positioning following last week’s speech by Fed Chair Powell.

- While Fed Chair Powell’s speech rendered the December FOMC meeting minutes stale, his upcoming remarks at the Washington Economic Club could prove significant for the US Dollar.

- Retail traders are buying the dip in the greenback, fading advances by EUR/USD and GBP/USD.

The brief pause in the US Dollar’s downtrend (via the DXY Index) proved to be just that – a brief pause – as selling ultimately recaptured traders’ imaginations yesterday following a lackluster release of the December FOMC meeting minutes. The reaction (or lack thereof) was not necessarily a surprise, given that Fed Chair Jerome Powell’s speech on Friday, January 4 at the AEA’s Annual Meeting, where he reset rate expectations just weeks after the FOMC updated its Summary of Economic Projections in mid-December.

FOMC Minutes were a Dud, Attention on Powell Speech

Fed Chair Powell’s message on Friday was clear: additional tightening steps, be it rate hikes or balance sheet runoff, won’t materialize as quickly as previously anticipated. The central bank chief noted that the central bank was listening “carefully and sensitively” to the “market’s risk concerns” and it could “shift the process” of balance sheet normalization if necessary, as there was "no preset path for policy.” Curiously, the minutes revealed a tone similar to Fed Chair Powell’s; it seems as if either 1) Powell did a bad job communicating the Fed’s intentions at the December meeting or 2) the Fed has ex-post facto massaged the minutes to appear more dovish.

Accordingly, with the December FOMC meeting minutes stale having been rendered stale, and in light of another dreadfully thin economic calendar, attention today should be on his upcoming comments at the Washington Economic Club on Thursday. Given the evolution of his comments over the past several months ((paraphrasing) October: ‘rates a long way from neutral’; November: ‘closer to neutral’; December: ‘balance sheet normalization automatic’; January: ‘policy not on preset course’), confirmation that the Fed has become more sensitive to the “market’s risk concerns” could prove beneficial for global equities and bad for the US Dollar once again. 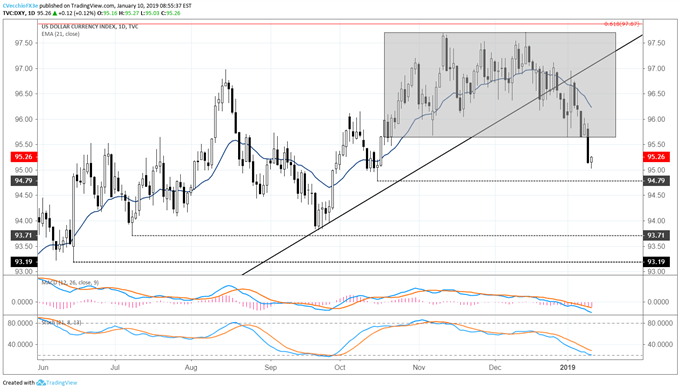 The inside day on Tuesday proved to be a fruitless attempt at yielding a pause in the recent selling, as we noted yesterday that “holding at support does not mean that the attempted breakdown is finished just yet.” Indeed, the DXY Index range breakdown on Wednesday below 95.65 confirms the shift to a more aggressively bearish momentum profile. At present time, the technical structure indicates that further bearish resolution is the most likely near-term outcome.

Having exited the near-three-month range to the downside, the DXY Index is now finding follow-through lower from its break of the April and September 2018 lows. Concurrently, the DXY Index remains below its daily 8-, 13-, and 21-EMA envelope. Likewise, both daily MACD and Slow Stochastics continue to point lower as they trend deeper into bearish territory. A weekly close below 95.65 is still required, but the framework for a top in the US Dollar is in place.